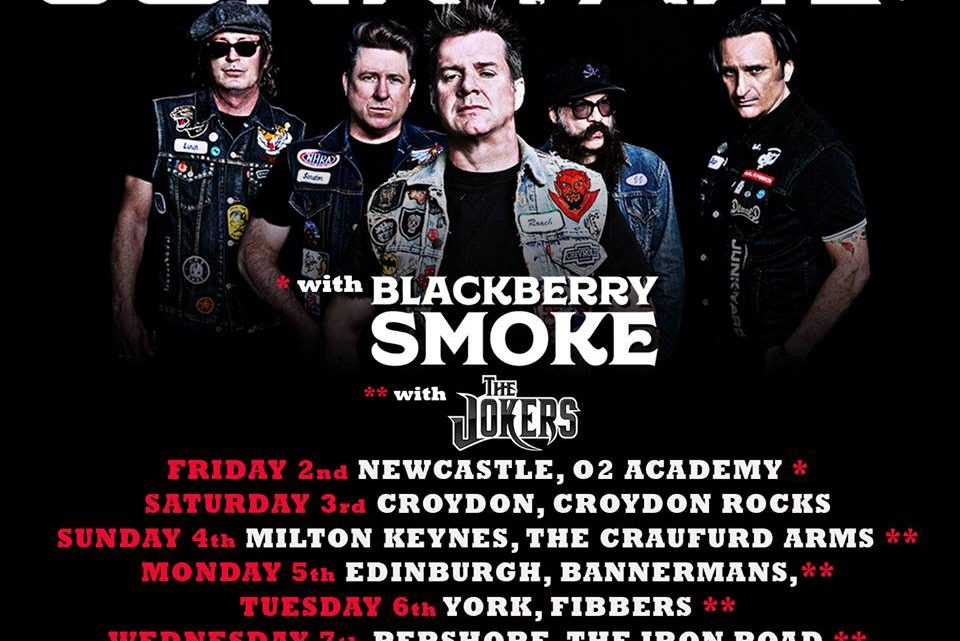 2nd November 2018 0 By John Deaux
JUNKYARD
ON TOUR IN THE UK FROM TODAY
02.11.18  NEWCASTLE O2 Academy *
03.11.18  CROYDON Croydon Rocks
04.11.18  MILTON KEYNES Craufurd Arms **
05.11.18  EDINBURGH Bannermans **
06.11.18  YORK Fibbers **
07.11.18  PERSHORE Iron Road **
08.11.18  BLACKPOOL Waterloo **
09.11.18  CARDIFF Tramshed *
10.11.18  BIRMINGHAM O2 Academy *
11.11.18  BRISTOL O2 Academy *
* with BLACKBERRY SMOKE
** with THE JOKERS
Raucous, blues-based and uncompromising, the eleven songs that made up ‘High Water’ marked a
triumphant return for Hollywood rockers Junkyard on their first official album since 1991. While odds
and sods had been released over the intervening years, ’High Water’ provided a firm statement of the
band’s ongoing intent upon its release in April 2017.
In recent years, the band had a blast playing what were tantamount to reunion shows, which quickly
turned into mini-tours through Spain and packed gigs across the US. New songs began percolating
and Junkyard began writing. Singer and founding member David Roach explains that “I had no grand
illusions of a magnum opus, or that we’d try and recreate what we were 25 years ago. This album is
not a departure; it’s a rock ‘n’ roll record from Junkyard with songs about life, love, regret, addiction
and memories.”
Junkyard, who hit MTV and radio hard with their self-titled 1989 Geffen debut and its follow-up ‘Sixes,
Sevens And Nines’, cement the authenticity of those records on ‘High Water’, with songs such as the
soul-searching ‘Cut From The Same Cloth’ and the rather more blunt ‘We Fuck Like We Fight’ (politely
shortened to ‘W.F.L.W.F.’ for the politically correct) going down as easy as an aged Kentucky bourbon.
The band members are all straight ahead guys, but ‘High Water’ has a few shades of meaning, with
guitarist Tim Mosher explaining: “It could be interpreted more than one way – like a ‘high water mark’
or the phrase ‘come hell or high water’, or with the image of the bottle on our CD cover, the actual
‘high water’, aka booze!”
The album also boasts writing and lead guitar credits from Brian Baker, a Junkyard founding member
who played with the band for many years but now plies his trade full time with Bad Religion, while on
the road they are joined by Jimmy James (The Hangmen), with founding member Pat Muzingo and
bassist Todd Muscat (who joined in 1991) rounding out the line-up.
“The Junkyard sound is a pretty classic one: big guitars and drums with David spilling his guts on top,”
continues Mosher, who also produced the record. “We wanted the album to sound loose and live, so
as far as production goes we weren’t trying to reinvent the wheel, but just deliver the songs in the best
light we could, then mix in some big riffs and throaty vocals.”
Junkyard’s classic sound also got some help from a fan and friend, with Charlie Starr of the group
Blackberry Smoke (with whom they are about to play UK tour dates) writing the dramatic, forthright
statement ‘Til the Wheels Fall Off’ specifically for the band.
As for a theme running through ‘High Water’, Roach jokes “we’re not that clever,” but describes the
album as “a rock ‘n’ roll record with a nod to punk rock and outlaw country rock.” It’s a sound that is
both timeless and timely. As always, they steer clear of politics: “I personally prefer to keep politics
out of my rock. I understand it’s a great platform, and maybe some feel it’s your duty to use it for a
purpose, but I feel our music is just for escape.” However, he has never been afraid to mine his own
mis-steps in song, this time around confessing all via ‘Wallet’. “This song was inspired by a night
I spent with a stranger on the eve of a tour,” says Roach. “I met her at [Hollywood bar] Boardners
and we went back to her place. The next day I snuck off like a rat to go home and pack for the tour.
After I left, I realised I had left my wallet behind and had to do the walk of shame to retrieve it.
Similar incidents have occurred – before and since to me – and I’m sure, countless others.”
The band, together with its legion of longtime fans, is excited that ‘High Water’ has brought them
back as an ongoing concern. As one of the great guttersnipe L.A. bands of the late 80’s – a storied
crew that also included Guns n’ Roses, Little Caesar and The Hangmen – they were proud to be
part of “one of the last great rock ‘n’ roll scenes,” as they term it. “I don’t think we dated ourselves
too badly in the beginning so a lot of our songs still have some relevance,” says Roach. “Also, we
were in hibernation a while, we weren’t playing while a lot of our contemporaries were. It’s not so
much longevity as it was people who missed us 20 years ago finally have a chance to see us.”
Mosher, who was a fan of the group before joining in 2000, sees all angles of the Junkyard saga.
“Although it’s been 17 years since I joined, I’m still ‘the new guy’, so with the new album I wanted
to give the fans something I would’ve wanted as a Junkyard fan – a proper third album. It was
important to all of us that the record be a statement of intent that could connect with fans from
back in the day as well as find new ones for whom this might be their first Junkyard record.
It’s a tall order, but we’re up for it.” 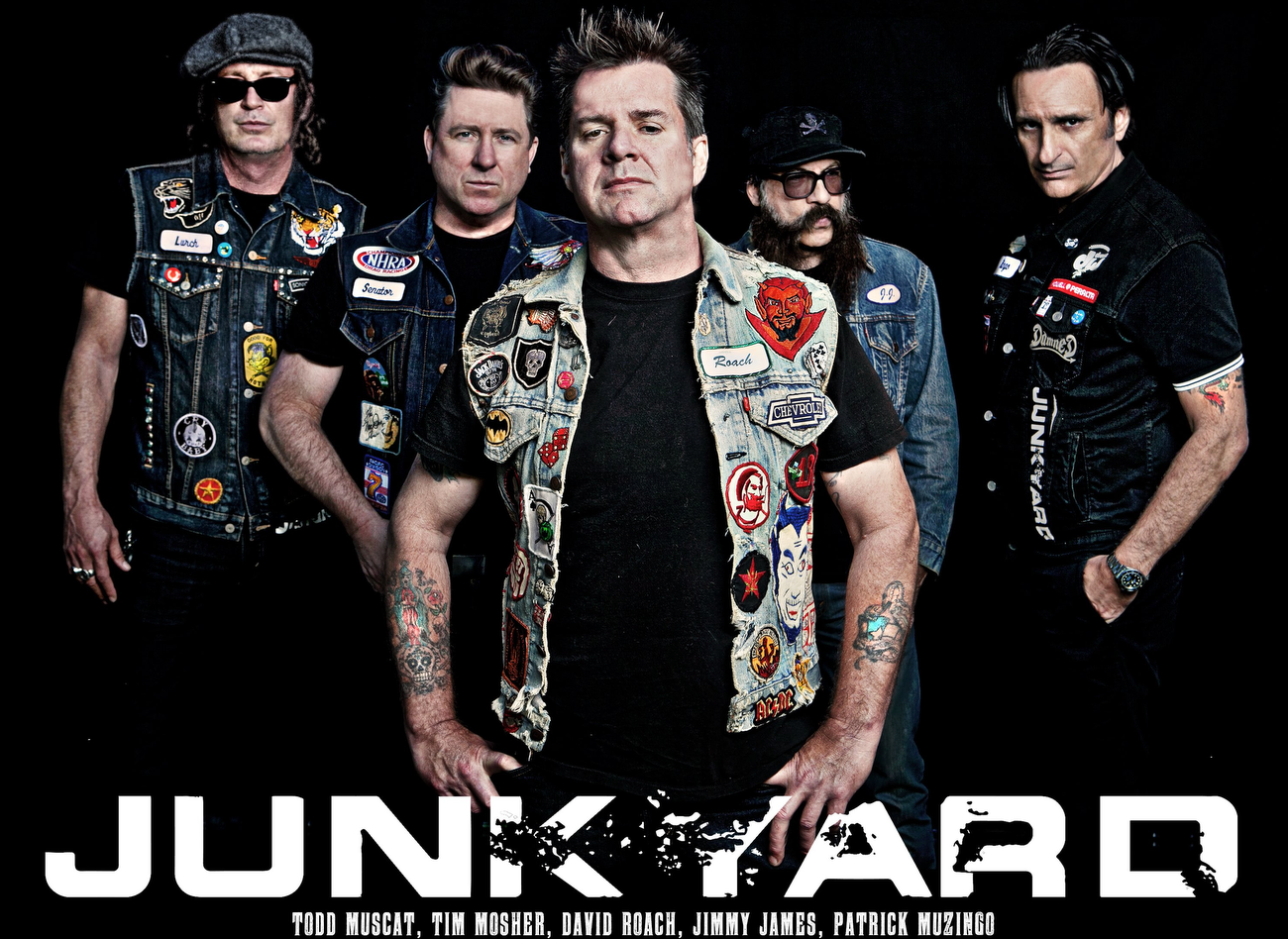