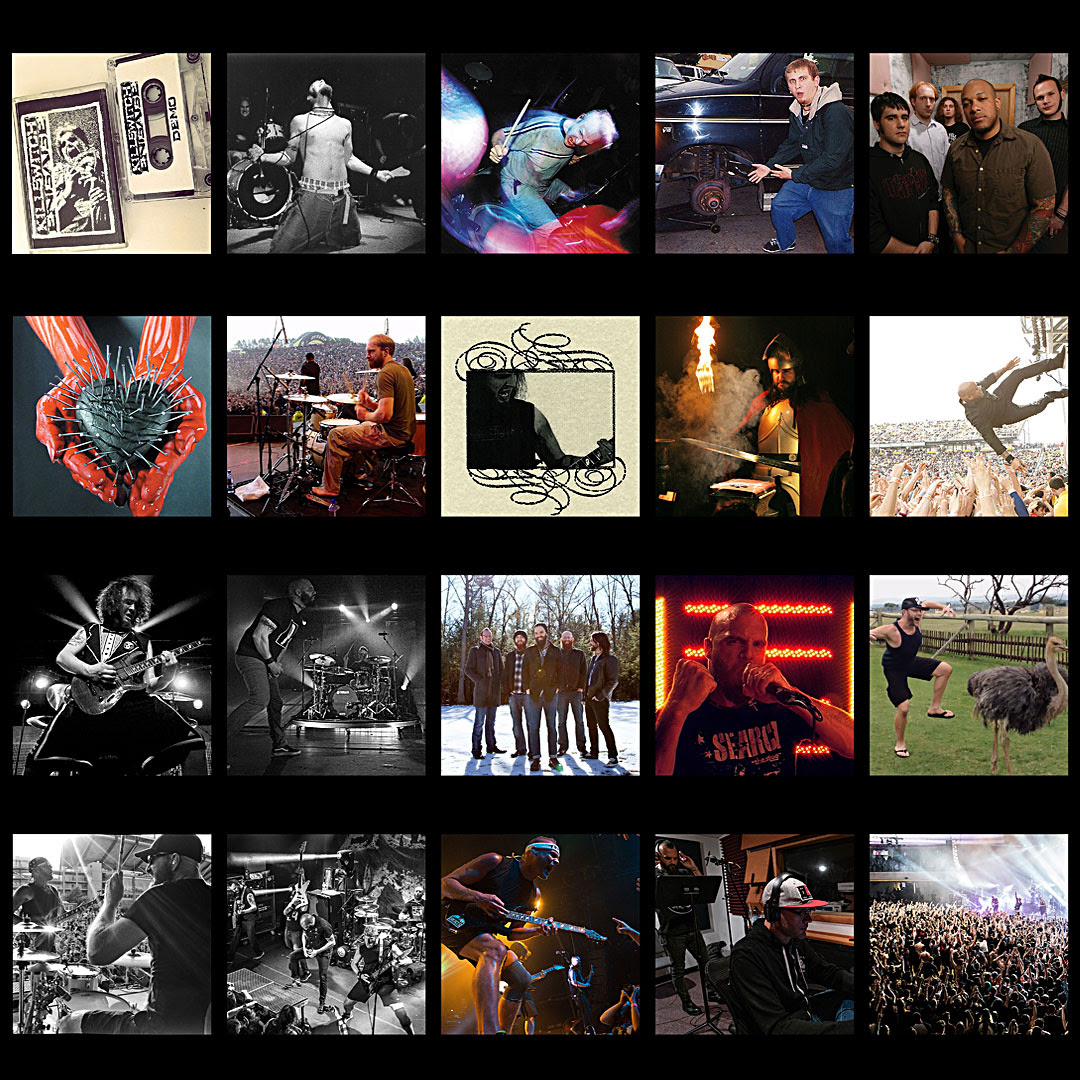 23rd June 2020 0 By John Deaux
On Wednesday, June 3rd, Killswitch Engage – Adam Dutkiewicz [guitar], Joel Stroetzel [guitar], Mike D’Antonio [bass], Justin Foley [drums], and Jesse Leach [vocals] – began posting an array of pictures from their history to the band’s official Instagram feed. The band wiped its Instagram page clean and proceeded to share one image per year per day, starting with 1999 and going through 2019. It was a mere hint of what was to come.
Today, June 23rd, Killswitch Engage have unveiled a comprehensive and in-depth 20-year timeline that documents so many of the band’s memorable career milestones and storied history, with plenty of captivating images. The clickable, scroll-through timeline boasts flyers from early shows, live shots from festival appearances, and fan tattoos. It also traces major tours, video shoots, album releases, Grammy nominations, lineup changes, and beyond. The timeline functions as a digital museum that effectively tells the complete Killswitch Engage story.
The timeline was created specifically for Killswitch Engage fans to enjoy and to reminisce.
View the entire timeline on the band’s official website at this location.
“I’ll never forget when we first started touring and I had to quit my day job to give it a go,” recalls Adam D. “I remember thinking, ‘Just try it for a year, that way you’ll have no regrets when it doesn’t work out, and you can go find a new job.’ 20-plus years later, here we are, and it’s been an amazing ride. I’m so grateful to our fans for letting us continue to do this…THANK YOU, KsE FANS EVERYWHERE!!!”
“It’s hard to believe KsE has been going for so long,” says Stroetzel. “We’re gettin’ old! We hope you all enjoy the photos, as they have definitely brought back a lot of memories for us! It seems like only yesterday we were playing VFW halls in Western Mass and rehearsing in my parents’ basement!”
D’Antonio says, “Looking back at what KsE has seen and done in 20 years is nothing short of mind-blowing to me. How a little band from Massachusetts could tour the world for this long is beyond me. A lifetime of exciting moments and amazing memories…I would not trade it for the world.”
Today, Killswitch Engage are also launching their Retro merch line, where they will be offering new takes on classic Killswitch Engage designs in limited edition quantities. The initial offerings from the Killswitch Engage Retro Collection include designs from the Alive Or Just Breathing and As Daylight Dies album cycles. You can pre-order the Retro designs here.
Overall, it’s been an eventful 20 years for Killswitch Engage. Recently recognised by Forbes as “one of modern metal’s most cherished acts,” Killswitch Engage first shook the structure of heavy music upon climbing out of snowy industrialised Western Massachusetts in 1999. The band pioneered a DNA-distinct and oft-imitated style, fusing thrashed-out European guitar pyrotechnics, East Coast hardcore spirit, on-stage hi-jinks, and enlightened lyricism that set the pace for what the turn-of-the-century deemed heavy.
2002’s Alive Or Just Breathing, which followed an attention-getting, self-titled debut, earned its reputation as a definitive album and was named among “The Top 100 Greatest Metal Albums of the Decade” by Decibel and celebrated by everyone from Metal Hammer to Revolver. Original singer Jesse Leach departed the band in 2002 and was replaced by Howard Jones, who would front the band until Leach’s return in 2012.
Along the way, Killswitch Engage have garnered three GRAMMY®Award nominations in the category of “Best Metal Performance” in 2005, 2014, and 2020. They’ve received gold certifications for The End Of Heartache [2004] and As Daylight Dies [2006]. The group landed three consecutive Top 10 debuts on the Billboard Top 200 with Killswitch Engage [2009], Disarm The Descent [2013], and their career high best at #6 with Incarnate [2016], which also took them into the UK’s main album chart Top 10 for the first time. The latter two releases would also both capture #1 on the USA’s Top Rock Albums and Top Hard Rock Albums charts. Their total streams have exceeded half-a-billion to date. Along the way, the band has shared stages with some of the biggest acts in the world and have sold out countless headline gigs in six continents across the globe. Their eighth full-length Atonement debuted #2 on the Billboard Top Album chart, #13 on the Billboard Top 200, #12 in the UK, and once again #1 on both the US Top Rock and Hard Rock Album charts.
Killswitch Engage have spent most of their career on the road, sharing stages with Iron Maiden, Slayer, Mastodon, Slipknot, and many others. They’ve appeared as a feature attraction at OZZFest, Download, Rock Star Energy Mayhem Festival, Taste Of Chaos (with My Chemical Romance), Warped Tour, and more.
Latest album, Atonement, released last summer by Music For Nations, is available to buy here.