Ahead of the release of his long-awaited new album Tell The Truth, out on March 2ndvia Provogue/Mascot Label Group, Texan guitarist Lance Lopez has released his brand new track The Real Deal. Speaking about the track Lopez explains “The Real Deal’ is what the ‘Tell The Truth’ story is all about. It’s about being who you are and being as true as you possibly can. It’s my story from my perspective told with unapologetic honesty. It’s like shaking hands with someone and looking them in the eye while you do it.”

Tell The Truth is an autobiographical tour-de-force through the life and times of an archetypal Texas blues legend with all the highs and lows that inevitably accompany this time honoured path. Lance Lopez has been on a slow, steady climb up the mountain to the blues rock hall of heavyweights for the last decade, and this album declares his arrival.

“Nothin’ worth having, ever came easy to me, the sweetest victories came within an inch of defeat” ~ “Never Came Easy”

Lance Lopez has a voice that lets you know he’s walked the walk, and his smoky tenor has grown more gravely and passionate with the years, then you remember, he was brought up by the likes of Bobby “Blue” Bland, Buddy Miles, Johnny Taylor, and Lucky Peterson. Lance started playing professionally at the age of 14 in bars and clubs in and around New Orleans, joining up with soul great Johnny Taylorwhen he was just 17, then becoming Lucky Peterson’s band leader at 18, and eventually joining theBuddy Miles Express. He’s lived the life every day since, and you can feel every mile of the road on this album.

The path he has walked has not been an easy one, and even with mentors and friends like Billy Gibbonsand Johnny Winter, that road is long and fraught with the necessity of the literally thousands of clubs, endless nights, low wages, and long travels – all of which leads to the many temptations that make for distractions to get one through the day. Lance Lopez, again, was mentored by the best, and that means that along with the priceless lessons in the musical life from legends like Buddy Miles, also came lessons in drink, drugs, late nights, the ravages of road food, and that side of the life that has broken so many. With the grace of good faith, friends, and family, Lance has seen it through to a healthier, happier side.

Lance Lopez released his first of six solo studio albums, First Things First, independently in 1998, several live outings, and two critically acclaimed and well received albums as the lead vocalist and guitarist for Supersonic Blues Machine (West Of Flushing, South Of Frisco, Californisoul). He’s toured extensively from America’s West Coast, throughout Europe and the UK, and as far East as India and Indonesia. 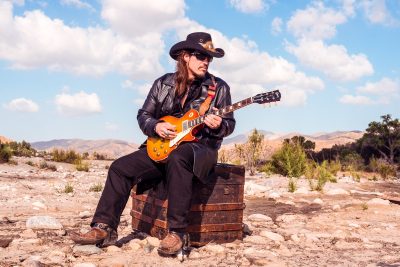 Tell The Truth is the record on which Lance Lopez finally defines his solo sound – there’s loads of his famous hard-edged gritty guitars, lovingly parsed and layered throughout, but there’s also a powerful full band sound on every track with throbbing bass lines, sumptuous piano and organ, wicked blues harp, thunderous drums, and Lopez’s industrial strength vocals across the whole of this outstanding songset.

Nobody seems to talk much about the rock side of Lance Lopez, but that’s about to change. The blues audience has been hip for years, but as much as he identifies with the legacies of the Hubert Sumlins and the many, many greats of that world, Lance Lopez also proudly wears the colours of British hard rock and the Southern rock sounds that informed the likes of Lynyrd Skynyrd – all of which came from the firestorm that Hendrix brought back with him from London. This album has one foot in the blues, and one foot in rock ’n’ roll, and Lopez straddles the divide brilliantly. The soul that he brings to this recipe is the gravy on top, and it makes for a very tasty, satisfying meal. This album is electrifying. It rolls through like a thunderous majestic freight train of truth, pain, and hope.

Tell The Truth is above all a working class blues rock record. Songs like “Cash My Check” and “Never Came Easy” look at life as it’s being lived, in an honest and forthright fashion. Then there are the more harrowing tales of life’s travails and temptations to be found on “High Life” and “Down To One Bar.” Even when he’s covering John Lee Hooker on an incendiary reading of “Mr. Lucky,” this is a fiercely personal record, and Lopez spares himself not one bit as he lays down life as he’s seen and lived it. Lopez has seen has demons, stared them down, and come out on the other side.

Produced and recorded over the last three years by Fabrizio Grossi in Los Angeles, this album clearly shows that Lopez has absorbed everything he’s heard, and the lessons of everyone he’s had an opportunity to share songs and stages with in the last few years. Trading verses with singers such as Warren Haynes and Walter Trout, trading solos with Eric Gales, Robben Ford, Steve Lukather, and the aforementioned Mr. Gibbons has certainly served Lance well.

The album hits the ground in fourth gear, and it never looks back. The grooves are a mile wide, and hit like a sledge hammer. And while there is great guitar, as you’d expect, all over the record, Lopez never overplays – he’s in all the right places, but he lets the songs breathe, and the arrangements allow for the pianos and organs, howling harps, and some great backing vocals to shine through. After the ‘field recording’ intro to “Never Came Easy”, the album’s opener, you might expect to hear some raging guitar, but instead, there’s a beefy bass line and an electric piano that rides with Lance through the first two verses and chorus – when he does come in, it’s with a hot slide guitar solo that sits well on top of some gris-gris voodoo backing chants that sonically makes the case that it’s not been an easy road, but the trip’s been worthwhile.

There’s a high-octane reading of John Lee Hooker’s “Mr. Lucky” that sees the sound and style of the Texas legend being updated with some extra horsepower, and a barrelling rhythm section. “The Real Deal” is the Lopez manifesto, and one of the cornerstones of this record.  The album’s title track closes out the set, and it’s a massive piece of rock with a funkiness that won’t be ignored. This will make a guy like Glenn Hughes smile when he hears an instrumental interlude that could easily be mistaken for a long lost Deep Purple track. This just to point out that this is not just another blues rock record – this is a great album by any measure, regardless of how it may get labelled. Blues rock? Hell yeah. Rock? Got it covered. The blues? It’s in everything Lance Lopez does. March 2, 2018 on Mascot Label Group.