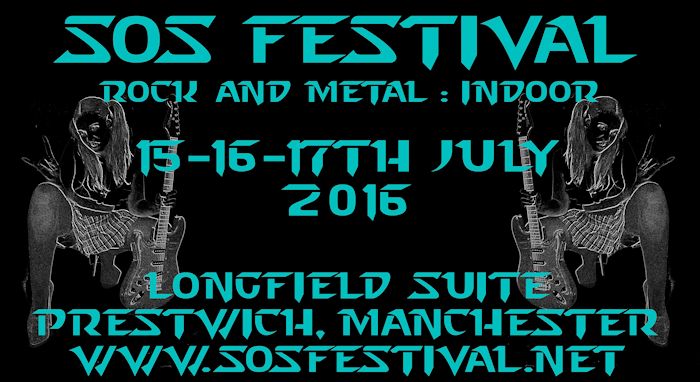 The very delightful & incredibly gracious Lynne Hampson of SOS festival, very kindly gave up some of her time from her hectic schedule sorting out this years SOS festival.

Thanks for taking time out of your hectic schedule. I’m sure you must be busy with the run up to SOS Fest. How did it get started?
It started 9 years ago. We’d been doing a few shows around Manchester & we decided it would be a good idea to put on a large on in the summer. Manchester, at that time, didn’t have any festivals.
Back then it was just a one day event. Luckily we were friends with Heavens Basement who were booking lots of shows, we got them as the headliner & that was the very beginning of SOS Fest.

Since then things have just progressed. It’s only in the last couple of years that it’s now a 3 day event. It’s been really good, the fans, press & bands like it. In fact we have thousands of bands who would LOVE to play SOS.

It’s great you decided to do something in Manchester as it does have a killer rock & metal scene.
It does. There are so many good bands here & there’s more coming out of the woodwork on a regular basis. There’s a few venues too for bands to play. Not just large venues like the O2 academy but places like The Ritz & Sound Control which are smaller.

We hold a rock night on a Thursday at Grand Central where we put on not just local bands but touring bands etc. Through that, we do get to see alot of up & coming talent.

How do you pick the bands for SOS?
It’s a really tough choice. Not only do we see lots of great bands through the rock night but we also get hundreds of submissions through the website. There’s a few of us that sit & listen to each submission, then we thrash it out between us (laughs). We also have our regulars that come every year & they give us ideas of who they’d like to see. So it’s not an easy decision but it’s fun.

We cater for rock & metal. There’s nothing overly heavy, extreme or punky. It’s mainly rock & metal that we focus on.

My partner was dabbling with music management & promotion & had an idea of putting a record label together as a hobby. That was back in 2008 & it’s just grown from there . There’s a lot of bands that we have on the label that we also put on the SOS bill.

Anything in the pipeline with the label?
We’ve just released Wizz Wizards new album which is doing really well & we’ve just re-signed Knock Out Kaine for another 2 albums & just released their EP Cruel Brittania.

There’s a few things in the pipeline & we’re really busy with Blaze Bailey at the moment too as he’s currently out on a 70 date tour.

You really are busy
Indeed, we’re still looking & booking bands for SOS at the moment to & we have some announcements going out soon.

Anything you want to let slip?
No (laughs)  We’re still signing contracts right now so no scoop for you (laughs)

But we have already booked a couple of bands for our 10th anniversary & that will be a big one for us.

You’ve just moved to a larger venue for this years festival.
Sadly yes. Our previous venue (Radcliffe Civic) which hosted the last 8 has been under the threat of closure. So instead of taking a chance we made the decision to move. We managed to secure the Longfield Suite, Prestwich, Manchester as the new venue for SOS which is brilliant. They’ve been really accommodating with us & they’re allowing us a 2nd stage as well, which is what we had in the last venue. So there will be an electric stage & an acoustic stage too.

The other great thing about now being located in Prestwhich, is not just because it’s a lovely town with lots of amenities but there’s great access & free parking.

How are you able to keep the costs down for SOS? (FRIDAY £5, SATURDAY £10, SUNDAY £10, FULL WEEKEND £15)
We try to keep it as low as we can to attract families as it’s a family run event. We encourage people to bring their kids as that’s where it all starts really. A lot of kids are at home playing computer games so this is a great way to get them out of the house & spend good quality family time. I have to be honest tho, it’s mainly dads that bring their kids which is really good. The main this is that they really enjoy it & they come back year on year. We see so many familiar faces & it has become quite a little community.

We’re not in it to make money, we’re here to make sure everyone has a good time. The bands themselves get treated really well. We try & treat them like they were at a European festival so there’s a lot of respect as well as getting food, beer & water. We have a lot of press arrive so the bands do get a fair amount of good coverage.

We do have Metal Nation & Power Play that help out. We’re really lucky that we have our own back line & PA & we have friends come over from Belgium that also bring back line equipment as they also do festivals there. So we’re lucky that we can try & keep the price as low as we can. As I said we’re not in it to make money.

We’ve only started doing the Friday night as people were travelling from different areas of the country & were asking us “what do we do, where do we go etc. Especially with the kids?” So Friday night became a party night. We’re always set up by Friday so we decided to open the doors early & it’s been a huge success.

Do you have a large team that helps out?
Again we’re really lucky as we have a few people who donate their time for free. Friends help us out on merch & of course stage crew etc & that’s another way we manage to keep the price low.

What are you most looking forward to this year?
It has to be going to see Heart in June. That should be a cracking show.
If you could have any 2 bands on the bill, who would it be?

Saxon are my favourite band so I’d have to have them along with Whitesnake. It was great to have Doug Scarett (Saxon guitarist) share the stage with Absolva for a guest appearance a couple of years ago.

Hopefully it wont be too long ‘ti you get your dream acts.
Hopefully

I know you do loads of travelling around. What’s currently playing in the car?
Knock Out Kaines Cruel Britannia to be totally honest.

It would be rude not to. AATR really enjoyed that EP
You did indeed & thank you for the review.

You’re most welcome. AATR wishes you all the best for this years festival & it’s been an absolute pleasure to speak to you. 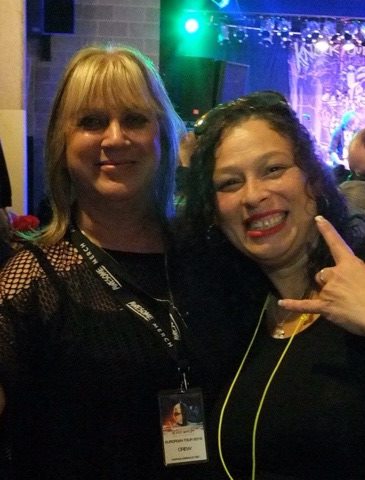