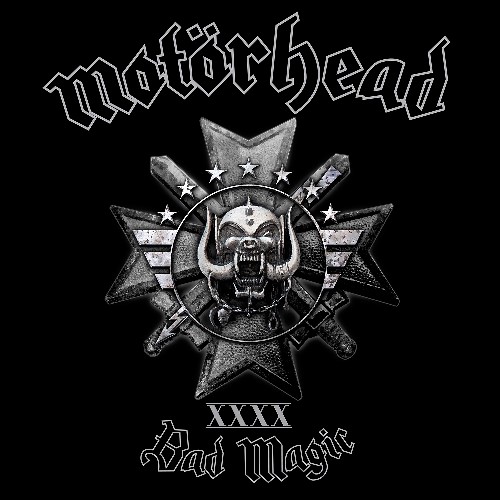 After 40 years rattling teeth, bones and ears with their legendary rock’n’roll, you might excuse Motörhead if they wanted to ease off.
Put their feet up.
Relax a little.
But that’s just it…
…this is Motörhead.
And instead, Motörhead gleefully say a loud and hearty ‘bollocks’ to that sort of feeble-minded thinking with their 22nd studio album, Bad Magic. Bristling with thunderous attitude, pioneering spirit and some of the fiercest rhythms and riffs that’ll beat your ears into submission this year, Bad Magic is a massive kick in the teeth for anyone who dared believe it might be otherwise. Indeed, if those people still remain, they would do well to grab some big fat earplugs, fall to their knees and pray like buggery, because big-rig head crushers like “Thunder And Lightning” and the especially l-o-u-d “Teach‘Em How To Bleed” show that Motörhead are as strong, mean, loud, relentless, uncompromising and goddam heavy as ever.

Drawing on their own vast catalog of road-warrior freewheeling rock’n’roll spirit, Bad Magic also strides confidently into some of the earlier attitudes of Motörmusic. Written and recorded in the studio together, for the first time in the Kilmister/Campbell/Dee era, the more ‘live’ approach to creating Bad Magic has obviously paid dividends in this regard. There is the driving malevolence of “Choking On Your Screams”, with Lemmy in magnificently omnipotent vocal mood, “Electricity” carries a hefty chunk of punk attitude married with some of Phil Campbell’s best lead work in years, while “Shoot Out All of Your Lights” is all devilish, greasy biker-borne-screw-you-and yours, Mikkey Dee’s tribal drums pounding out a great path for more Kilmister proclamations. The boys even enjoyed a guest appearance from Queen’s Brian May on “The Devil”, adding a scintillating solo on this thunderous Motörstomper.

Produced at NRG Studios with long-time producer Cameron Webb, Bad Magic came together after a couple of years which saw Motörhead enjoy their most successful international era in over two decades off the back of their last release Aftershock. Lemmy also finally decided to face the fact he is flesh, blood and mortal like all of us, adjusting his lifestyle to kick the ass of health-issues and re-emerging stronger, leaner and meaner than ever. His own personal performances on Bad Magic rank as some of the most wide-ranging and unique he has delivered in years, and on the ballad “Until The End”, Lemmy opens up with equal levels explanation and intent on the simple but important matters which life conjures for us all. Add to all of this a wonderfully executed, gritty delivery of The Rolling Stones classic “Sympathy For The Devil”, and it will be clear to anyone with a pair of ears that Bad Magic is Motörhead’s finest work in over two decades.

You can also expect the road to get it’s ass-kicked by Motörhead once again in the last half of 2015! Starting in mid-August, there will be a North American tour with Anthrax which ends with the now-legendary Motörboat cruise between Sept 28th – Oct 2nd from Miami, Florida to Nassau in the Bahamas, also featuring Slayer and Anthrax among a bumper line-up of bands. And Motörhead’s 40th Anniversary European Winter tour will start on November 15th 2015 at Le Zenith in Paris, ending on December 6th at the Hartwell Arena in Helsinki, Finland. More dates will be announced soon, so keep checking the band’s official website www.imotorhead.com as well as the following social media platforms for details.

All in all, with Bad Magic’s release now confirmed, Motörheadbangers and rock’n’roll fans worldwide can prepare themselves for the prodigal return of rock music’s greatest, meanest, dirtiest and most relentless trio…yeah, believe it: Motörhead proudly, and defiantly, remain the flag you’re proud to fly through thick and thin.

*by The Rolling Stones

Interview with Jimmy MacGregor of Pteroglyph