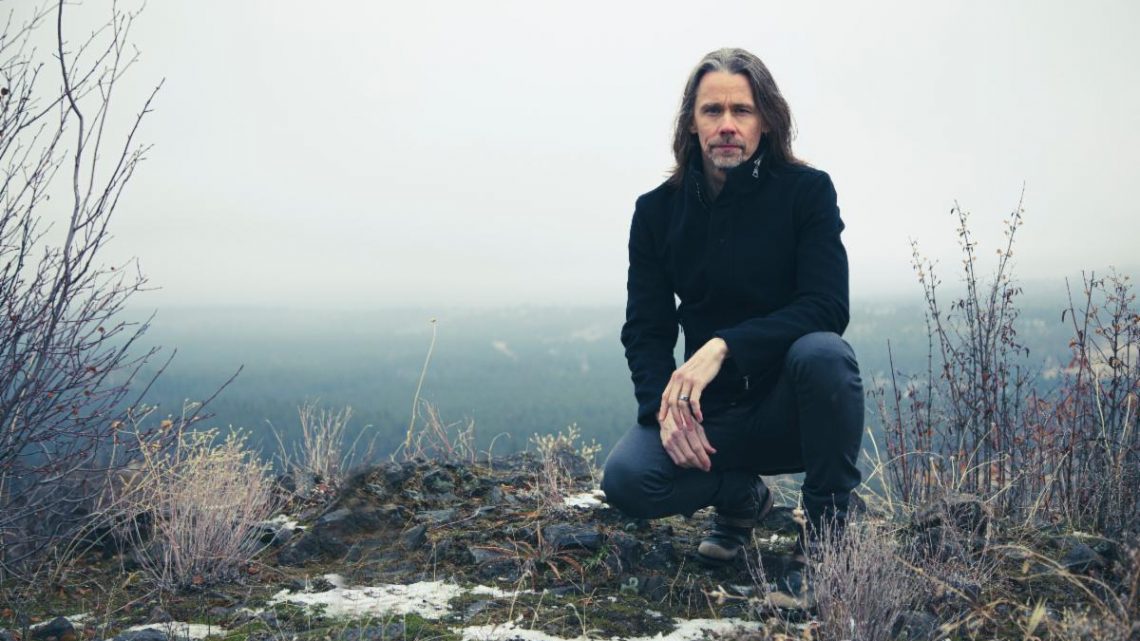 Building upon the excitement from the announcement of his second album The Ides Of March last month, Myles Kennedy is releasing its title track to the masses. “The Ides Of March” is the longest song on the album clocking in at 7:39 and showcases the musicianship of Kennedy and cohorts – longtime friend and drummer Zia Uddin and bassist/manager Tim Tournier. The band stretch out musically as Kennedy sings an ominous warning “beware the ides of March.”

Talking about the title track, Myles Kennedy comments, “Written quickly one night after having a few drinks, it was an attempt to sum up what so many of us felt during the beginning of the pandemic. We were bored, frustrated, and self-medicating to avoid going stir crazy,” explains Kennedy. “What I like about the narrative, is it pushes the idea that if everything is going to hell, at least try and do it in a celebratory fashion.”

Watch the official video for “The Ides Of March” HERE.

Never a musician to waste any precious time, Alter Bridge and Slash and the Conspirators vocalist Myles Kennedy used the recent pandemic to finalize his sophomore solo album. During his time at home due to all touring being canceled, Myles created the framework for the song ideas that would make up The Ides Of March. From the slide guitar riffs of the album opener “Get Along” to the pensive blues style of closer “Worried Mind,” it is clear that Myles has crafted a formidable follow up to his debut solo album. While Year Of The Tiger was more of an acoustic exploration through Myles’ mind, The Ides Of March finds him strapping on his electric guitar and pushing himself as a guitarist/songwriter. Tracks like “A Thousand Words,” “Wake Me When It’s Over” and “Moonshot” showcase the diverse music arrangements that has garnered Myles fans globally across all of his projects. The Ides Of March was produced by longtime collaborator Michael “Elvis” Baskette and is slated for release on May 14th via Napalm Records.

The first single, “In Stride”, opens with Myles showcasing his slide playing before delivering a lyrical message to “take it all in stride.” The song is currently seeing heavy rotation at rock radio stations around the world, leading to a Top 15 placement in the German Rock Radio Airplay Charts and rising in the Top 30 at US Active Rock, and has received massive response from fans alike. The video for “In Stride” marks a return by Stefano Bertelli (who created the “Native Son” video for Alter Bridge) and shows an animated Myles as he takes the end of the world in stride. 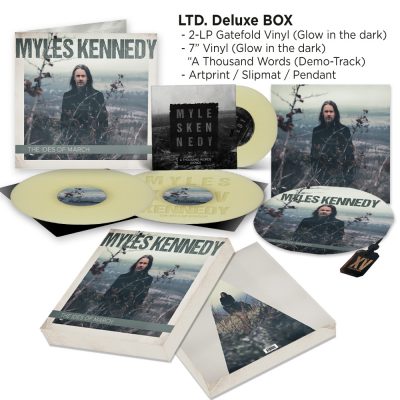 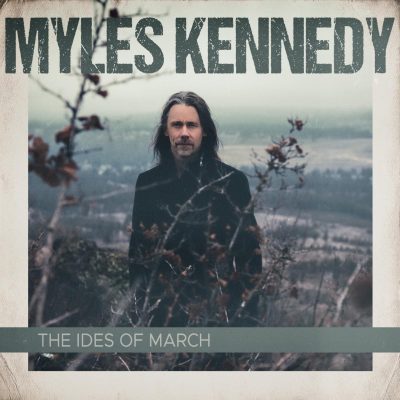 The Ides Of March

4) The Ides Of March

10) Sifting Through The Fire

At this point, MYLES KENNEDY’s voice precedes him. Certainly, it courses through six chart-topping albums from gold-selling rock juggernaut Alter Bridge, three records with Slash and The Conspirators, two albums from The Mayfield Four, his 2018 solo debut Year of the Tiger, and guest appearances for everyone from Disturbed and Halestorm to Gov’t Mule, Sevendust, Mark Morton, and Darryl “DMC” McDaniels. For as much as he remains renowned for his skyscraping timbre and earth-quaking bluesy wail, his musicianship also encompasses eloquent songcraft, thoughtful cinematic arrangements, and, of course, dynamic guitar fireworks as explosive as his astounding vocal range. MYLES KENNEDY burst on the music scene in 1990, but it wasn’t until 1995, through his band The Mayfield Four, that he gained some notoriety. It was when The Mayfield Four toured opening for hitmakers Creed that MYLES KENNEDY would meet Mark Tremonti, Brian Marshall and Scott Phillips. This meeting would eventually lead to the formation of Alter Bridge, the band that would become Myles’ calling card to the world. In 2008, the legacy of MYLES KENNEDY was circling the music industry and eventually found its way to members of Led Zeppelin. A now legendary story, Myles was asked to jam with Jimmy Page, John Paul Jones and Jason Bonham for a potential project that never materialized. In 2009, Guns N’ Roses guitarist Slash was working on a solo project and tapped Myles Kennedy to do vocals on two songs on that release. That partnership would lead to Myles becoming the vocalist for his other rock band, Slash featuring Myles Kennedy and The Conspirators. This relationship would also lead to MYLES KENNEDY singing for the iconic Guns N’ Roses at their Rock & Roll Hall Of Fame induction in 2012 after band founder Axl Rose was unable to attend. Through Myles’ various projects, he has appeared on The Tonight Show; Jimmy Kimmel Live; Conan; has had music used by the WWE, Major League Baseball and NASCAR to name a few; and appeared in the motion picture Rock Star. 2018 marked a new chapter in Myles’ career when he released his long-awaited debut solo album, Year Of The Tiger, to critical and commercial success. With his new solo album, The Ides Of March, MYLES KENNEDY showcases the talent that has made him one of the premier frontmen of modern music today.