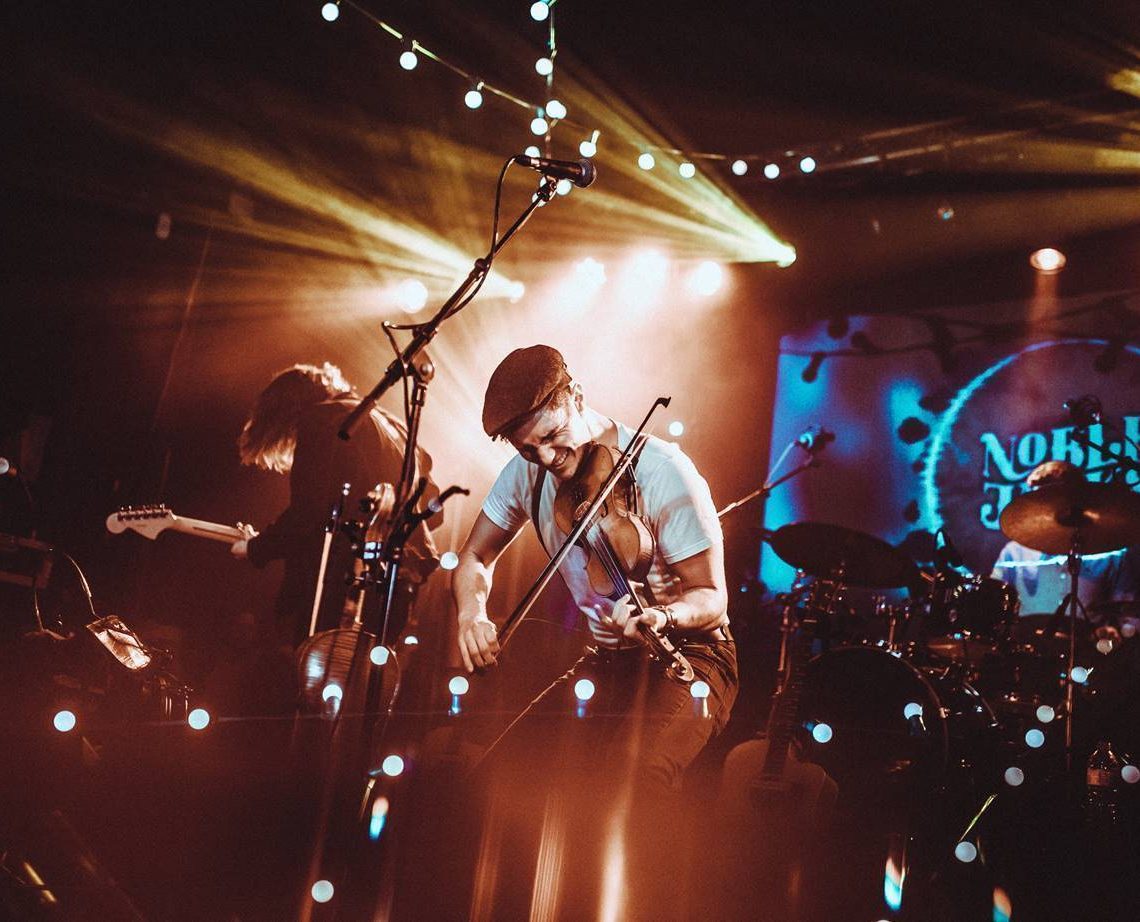 Noble Jacks are a rip-roaring, British-Americana alt folk band. “Described as “An Explosion of insurmountable energy and brilliantly catchy riffs” by On The Beat Magazine

Noble Jacks brim with raw energy and in-performance passion.  They’re a roof-raising act whose high-octane, footstompin’ rhythms and engaging lyricism have galvanised audiences across the UK and further abroad. With the fiddle leading the hectic, exhilarating, no holds barred charge, Noble Jacks are out to take no prisoners!

Noble Jacks have been touring relentlessly, with sold out shows across the UK on their headline tours, as well as shows at major festivals including Glastonbury, Isle of Wight and Bestival, plus major European festivals. Leading up to their second album, the Jacks played at Americana Festival  UK and C2C Festival at the O2, London, The album Stay Awake, released Spring 2019 went straight to #7 in the Official Americana Album Charts with the launch party seeing a sold out Concorde2 (Brighton)

Having just played a  run of big support shows with The Dead South on their UK tour, Next, the band will be touring in the UK, hitting some new venues.

“We’re stoked to be back out on the road this Autumn, touring our new album, ‘Stay Awake‘,” say Noble Jacks themselves, “Following an incredible Spring tour, and a hectic festival season, we’re looking forward to visiting new towns that fans have been desperate for us to play.“

Fan favourites from the band’s 2017 debut ‘What The Hammer’ and this year’s ‘Stay Awake’ will feature in the band’s tour, but Noble Jacks aren’t ones to rest on their laurels: they’ve got a brand new album in the pipeline for 2020.

Reviewing Noble Jacks, Polly Hember of On The Beat hit the nail on the head: “This is the kind of music that begs to be experienced live. It bursts forward with a stream of raw energy; the instruments are played with such fever that at times the dancing audience felt like they couldn’t keep up (although we gave it a damn good try) and the drums propel the music onwards into oblivion. “

If you get the chance to see this exciting, high-energy, life-enhancing band in their natural habitat – live performance – check out the website and bookings and seize the chance with both hands!

See the band’s website for full and up-to-date details: https://www.noblejacks.com/

DevilDriver Have To Cancel European Tour 2019 And Will Return In 2020!