Orc Adams Of ORCumentary Has A Quirky Dog Called Tubbs

Orc Adams is the keyboardist, vocalist and songwriter for Connecticut based one man madness that is ORCumentary. His comedic ORC-Metal transports us to a fantasy world full of dwarves, goblins, elves and lets not forget follows the adventures of one very heroic Orc. We caught up with Orc Adams to talk about something in this realm for a change.

Hey Orc Adams, all elves aside, we want to talk about your pets. How many pets do you have? What are their names and why? How long have you had them? Tell us all about them! 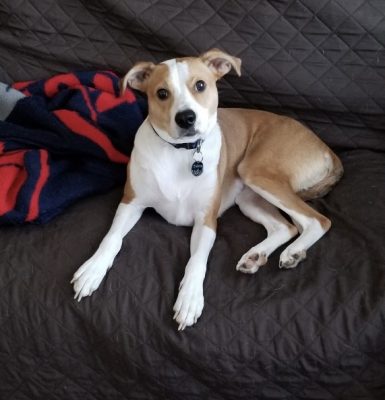 I have one dog, named Tubbs. He had that name when we got him and we didn’t feel like changing it. We adopted him when he was almost 6 months old, and he’s been with us for over 2 years. He weighs about 40 lbs and is the sweetest dog you’ll ever meet. He’s a fierce hunter, but also a scaredy cat. His favourite human foods are cheese and eggs and he loves to have his belly scratched.

I have two stories to tell:

Tubbs gets excited when there are visitors. He’s the kind of dog that’ll bark at you a lot if he doesn’t know you, but give him 10 minutes and he becomes your best friend. A couple years ago when we were taking a break from band practice (my other band, Virus of Ideals), he got so excited and wound-up that he jumped on the kitchen table. He had never even attempted anything remotely close to this before, nor has he since. What was even more impressive was that it was a clean jump; he didn’t knock anything over or stumble or anything. He just stood on the table for a few seconds while everyone froze and stared.

One of our dining room windows looks out at the backyard. He was looking out the window (which was wide open) and asked to go out and play one morning. We said no because we were busy and had just let him out. Even though we have a fenced-in backyard, I’m adamant about either me or my wife being outside with him in case he gets into mischief or worse. Well, we go back to our business and suddenly hear this loud BANG. We look quickly enough to see him tumble backwards. Turns out he tried to take fate into his own paws and jump out the window himself and into the backyard. I’m assuming he didn’t see the window screen that denied him his freedom; must have been quite a shock!

Wow! He is certainly a character, what is the best trick he can do?

He sits, shakes and lays down, but isn’t much for tricks overall. I hope he can eventually learn to return the ball/Frisbee when we throw it in the backyard though. If he has a lot of pent-up energy, he will do laps in the backyard full-tilt. It’s incredible to watch; I’ve never seen a dog run so fast.

As I said before, he’s a fearless hunter. He’s usually not quite fast enough to catch animals in our backyard, but he’s killed a couple birds. Obviously I don’t encourage it or want him to do that, but part of me is a bit impressed when he does. Trying to get him to cough up a bird he has in his mouth isn’t fun though.

We usually let him run free in our enclosed backyard when we let him out to do his business, weather permitting. One time we did this and we were unaware there were a couple of baby blue jays that fell out of a tree and into our yard. So he zips to one side of the yard and grabs one. I flipped out trying to get him to drop it, praying to Gor-Nacular that he didn’t bite down enough to hurt or kill the little guy. He dropped it unharmed but immediately grabbed the other baby! Fortunately that one was unharmed too. For a few weeks we let only let him outside on the leash on the other side of the yard, giving the babies time to grow and eventually learn to fly.

What a fast little bugger! This past year has been pretty manic, so you’ve no-doubt, like the rest of us, spent a lot of time at home. How has your Tubbs helped being at home for you? Has he been comforting or has he just been driving you nuts? 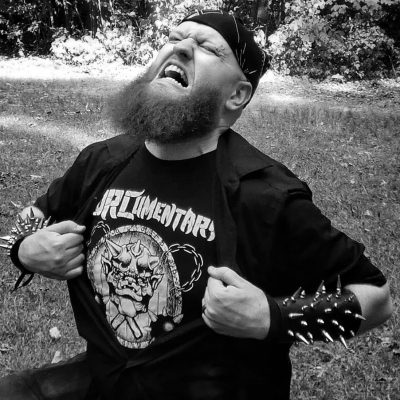 We are lucky that Tubbs is well-behaved and low maintenance. He spends most days just chilling or cuddling with us, so it’s not like he’s bouncing off the walls for hours. He’s a jealous boy though; if my wife and I are cuddling on the couch, sometimes he’ll jump up and try to get physically between us. He’s brought so much joy to our house and has definitely made the past year easier.

What a darling. Have you always been an animal lover? Have you ever owned any exotic or different pets?

Before Tubbs, I hadn’t had a pet since I was 11, and that was a pair of gerbils that I frankly was too young and irresponsible to take good care of. I hadn’t had a pet since, but my wife twisted my arm to get a dog. Tubbs was so cute in the pictures but I was still unsure how it would work out, even when we went to pick him up. When he was brought out to us, he was so scared and I instantly fell in love. All I wanted to do was make him feel happy and safe. The first couple of months were still a huge challenge for me to adjust and it took a while for me to learn how to be a good dog dad. It takes a lot of patience and understanding. Tubbs is very forgiving and loving though, which made things easier. We really don’t deserve dogs; they are too good for this world.

They really are! Are you one of those people that puts your pet into costumes? Don’t be shy to tell us about their battle vest.

We’ve gotten him to wear Christmas sweaters with minimal complaint, but he doesn’t like things put on his head or feet. He usually tries to take off sweaters after a few minutes.

Thats sweet, who looks after your pet whilst you’re away on tour/holiday?

If I’m gone, my wife takes care of him, and vice versa. I don’t think I’ve been away from home for more than one night since we got him, though. If we are both away, we take him to daycare or have friends/family check in on him. He doesn’t always take well to daycare, so I imagine when we take a longer vacation it’ll likely be a combination of the two or something.

Does he like it when you practise at home? Does Tubbs seem to prefer any particular genre of music more than another?

He only reacts to music specifically if there are certain sounds, but generally his reactions are based on volume more than style. He gets freaked out when there’s band practice in the basement, as it’s still pretty loud on the first floor. My wife in these instances will either stay with him on the first floor or take him outside or upstairs.

We put a pillow for him in my music room so he can hang out in there if he likes. It’s less about him wanting to be present during rehearsal/songwriting and more about being close to Dad, though. 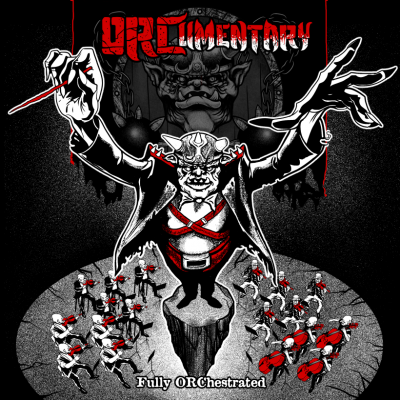 I just released a new album this past February! Fully ORChestrated is a special album commemorating 15 years of ORCumentary. It includes many songs from across my back catalog re-arranged to be in the ORChestral style, along with a few brand new songs. This is an experiment I’ve been wanting to do for over a decade and the timing was finally right to make it a reality. I’m extremely proud of the result; there are strings, brass, flutes, timpani, etc instead of traditional “metal” instruments, but it’s still an intense listening experience. It’s available digitally on all outlets and on deluxe CD (with lots of bonuses) on my web shop.(www.orcumentary.bigcartel.com)

Fantastic! Have you anything you’d like to say to your fans/followers?

Find everything ORCumentary on Linktree HERE

Holding Absence – “The Greatest Mistake Of My Life” – Review