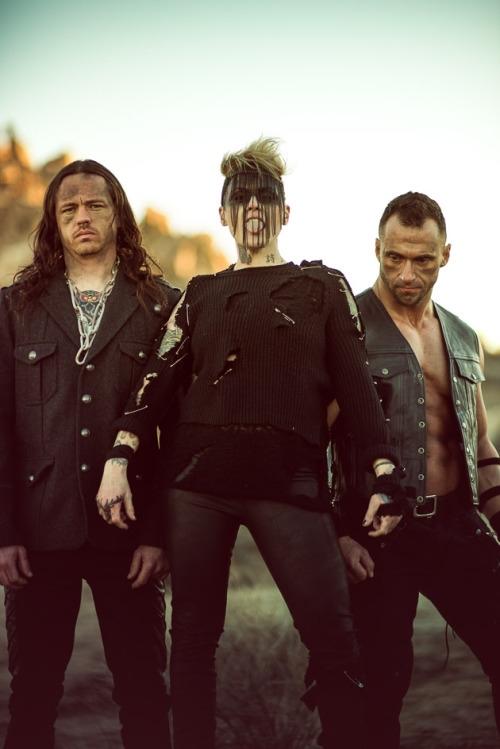 31st January 2018 0 By John Deaux
Activist-Artist OTEP Aims to Incite Social Change with Upcoming Album, Set to Release in Mid/Late 2018
Confirmed to Perform at Cadott, WI’s 25th Annual Rock Fest
Groundbreaking art-rock performer, author and spoken word artist OTEP is thrilled to divulge new, behind-the-scenes information about her upcoming, currently untitled, full-length album. The album – her eighth overall and second with Napalm Records – is scheduled to hit stores later this year. OTEP and her band are currently recording at The Lair in Los Angeles, completely utilizing the same equipment used on their first album, Sevas Tra (down to her original vocal microphone, a SHURE Beta 58), in order to create a sound reminiscent of their roots. The Lair is also where OTEP recorded Smash The Control Machine, the band’s fourth release.
OTEP says this upcoming eighth album is undoubtedly the band’s most authentic and honest. “I’m co-producing this album with my guitarist Aristotle, which has allowed us to create without limitations. The musicality is stellar and has been elevated to a whole new stratosphere of sound. With Aristotle on guitar, Justin Kier on drums and Drew Barnes on bass, each musician has a powerful voice on this album.”
As for her lyrics, OTEP says, “No one is safe, no one escapes. It’s powerful, poetic, patriotic protest music. One could say it’s an activist album hoping to incite social change and support those who are at the barricades, who are marching in the streets for justice, who are demanding our government protect our great nation from enemies foreign and domestic – this includes the bloated colostomy bag disgracing the White House, Traitor Trump, and his loafer licking cronies… but I digress.”
This new album will follow OTEP‘s previous full-length, Generation Doom, released via Napalm Records in 2016. The critically acclaimed album debuted at #10 on the Independent Chart, #7 on the Rock Chart, #4 on the Hard Rock Chart and #109 on the Top 200 Albums Chart, according to Nielsen SoundScan. OTEP expects this next album to transcend all previous achievements, and feels spiritually strong about the number eight.
“Writing our eighth album is not only a blessing for which we are forever grateful but the number itself is said to have magical properties,” says OTEP. “In Norse mythology, the horse of the god Odin has eight legs. The Pythagoreans considered the number eight the “little holy number”. The eighth day of the Chinese New Year is the annual gathering of all the gods in Heaven. In the Tarot, eight is the card for Justice which seems appropriate considering the current political climate we are suffering through. The mathematical symbol for infinity is an eight on its side. There are eight festivals observed in the Wicca Wheel of the Year. There were eight gates surrounding the ancient city of Babylon. The eighth gate was named the Gate of Ishtar. Ishtar is the goddess of love and war, the Queen of the Earth and Heaven. She is the morning and evening star. Qualities I certainly relate to. And finally, I’m a Scorpio and Scorpio is the eighth astrological sign in the Zodiac.
A 33rd Degree Freemason and Master Rosicrucian, Manly P. Hall once said, ‘The rites of the Scorpion are the Mysteries of the Apocalypse and the ceremonies of Dionysus.’ Expect the unexpected. Expect to have your brain pushed back.”
OTEP shook up the United States last year with her popular “The Resistance” World Tour performances-potent, engaging exhibitions of activism awareness spreading the vital word on equal rights, social education and political enlightenment. This summer, OTEP will return to the stage at Rock Fest in Cadott, WI!

The 25th annual Rock Fest will take place from July 12-14, 2018 on the Rock Fest grounds and will be hosted by radio personality Lou Brutus. Three-day ticket holders are invited to an exclusive Bonus Bash on Wednesday, July 11 that will feature some of the biggest names coming to the festival. Disturbed, Incubus and Godsmack are slated to headline the festival, with additional performances confirmed from Rise Against, Halestorm, Seether, Black Label Society, Bush and many others. Rock Fest tickets, camping and pit passes are on sale now at http://bit.ly/RockFest2018. For additional information and a complete line-up list, visit www.rock-fest.com. 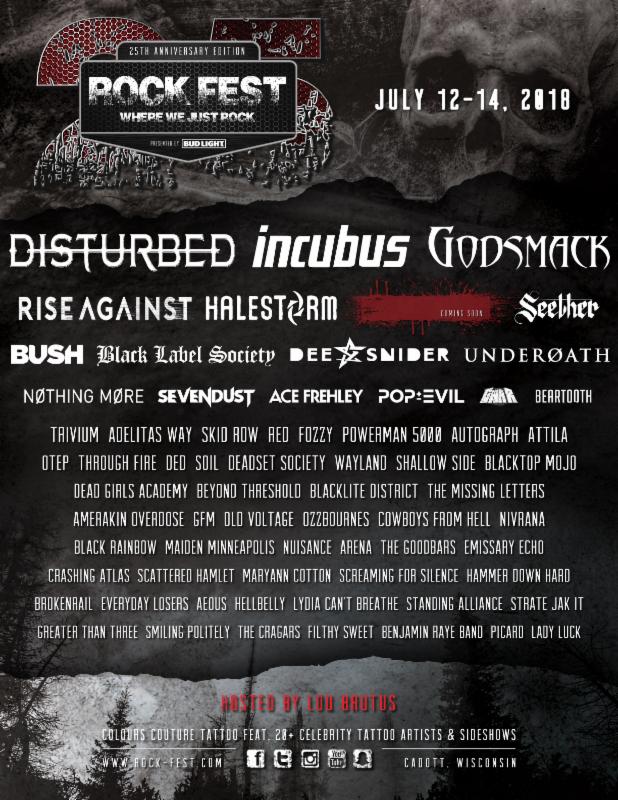