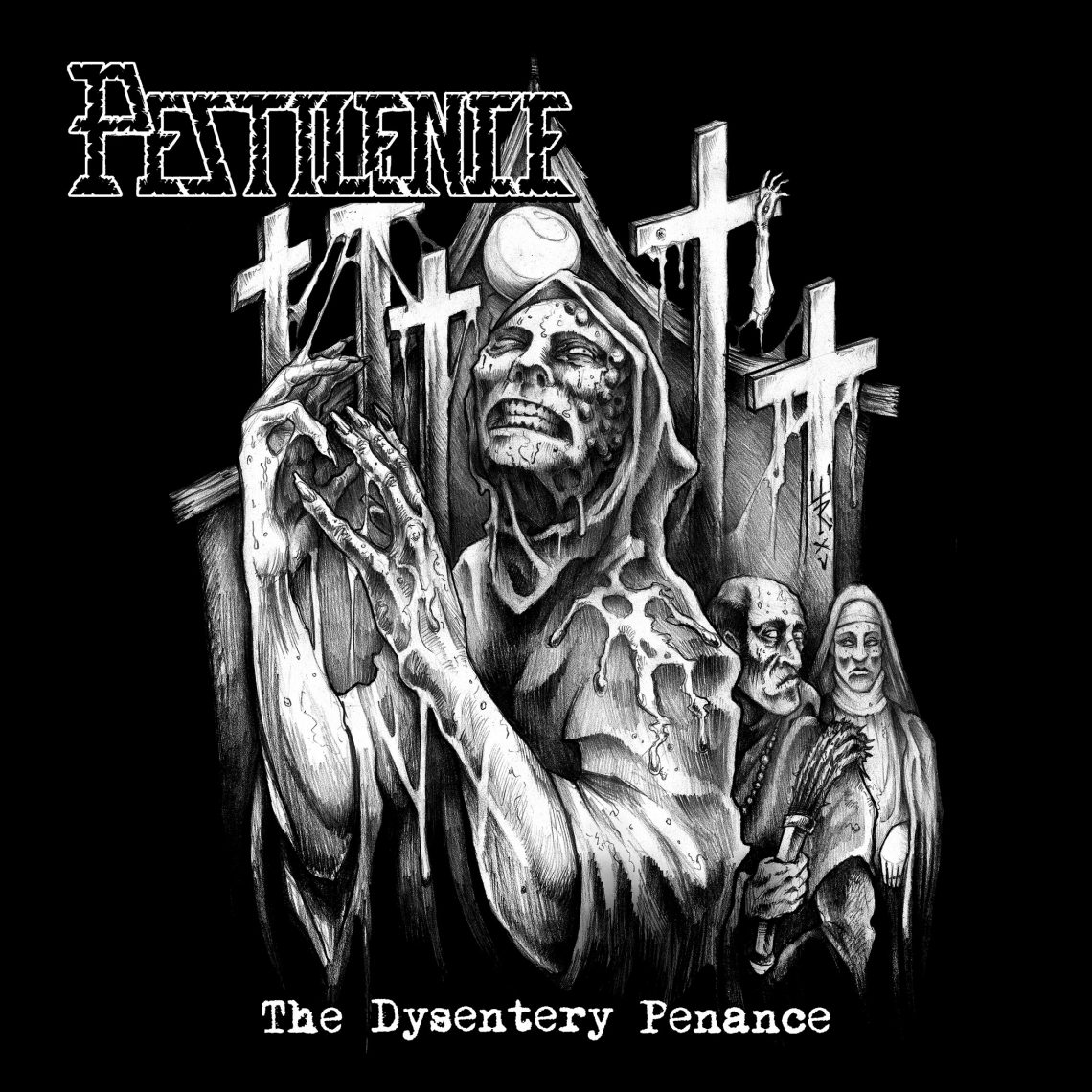 In the last few years, there has been a great resurrection of old school death metal bands. Death has come back as Death To All, playing all the old classics in tribute to the late, great, Chuck Schuldiner; Obituary have just released one of the greatest albums of their career; the last few Deicide albums have been fantastic (in my humble opinion); and we have had an album from new on the scene Gruesome, which is pure Death worship and to be honest, bloody amazing. With this rebirth comes The Dysentery Penance, from Pestilence. A remastered compilation of the first two demos from the Dutch death metal legends which earned them the attention of Roadrunner Records. Given the nature of the album, and the difference in sound from the two demos, I feel the best way to review this album would be to tackle it in two parts.

So we have the first four tracks, which are from the Dysentery demo originally released in 1987. There are few complaints about these tracks to be had – each song is a well written slab of Slayerinfluenced Old School death metal. Against The Innocent has an atmospheric, synthy into to start the album, before the blast beats and wounded shrieks of Patrick Mameli spew forth from the speakers. A reasonably catchy chorus and a pair of chaotic guitar solos are definitely the highlights of this track. Delirical Life opens with an infectious groove that demands you bang your head along, and then the thrashy, blasty, death metal riffs kick in and lead us to another brief chaos-fuelled solo, before we are thrust back into the realm of the groove laden riffs. Delirical Life is definitely a highlight of the album for anyone that likes solid riffs to bang your head along to.

Traitors Gate and Throne of Death are two solid, extremely enjoyable songs, and we also are gifted with the vocals taking on a much harsher, more modern sounding scream in places. A fair few guitar solos and a motherload of blindingly good riffs can be found in these tracks, and they are definitely two of the best from the album. The first four songs here basically sound like early Death with a bunch of Slayer riffs – and let’s face it, who doesn’t love Death, and who doesn’t love Slayer? Yeah, exactly. The only complaint I can possibly think of here is the production quality – the drums and vocals are very much in the forefront here, leading to many of the riffs being buried in the wall of noise (and what even is bass?). Other than that, a solid first half!

Then we come into the territory of The Penance demo, also released in 1987. I love the idea of the intro, Into Hades, I do, but the tone of the guitars and the screeching feedback just really grated on me and I’m rather glad it was over in less than a minute. But that was over quickly, and we get to hear Before the Penance, which makes the pain of Into Hades completely worth it – if there isn’t even a hint of your finger tapping, or your head bobbing (or, preferably, violently banging and scaring the mother-loving shit out of everyone on your bus… Or is that just me?) then you have deep, deep problems that must be addressed, there is just so much groove! Martin Van Duren’s vocals begin far, far too clean for this release however. A good vocalist for sure, but his singing (and it is just that, singing) is far too clean and lacking the piss and vinegar we heard from Patrick Mameli during the first half of the album. However, when Pestilence decide to trade in the groove on this track for blast beats and outrageous riffing, Van Duren’s vocals take the venomous turn it needs and all is right with the world.

This venom is largely continued throughout the rest of his portion of the album, and is far, far better suited for the music than his, while talented, out-of-place singing. Affection and Fight the Plague slap us in the face with another handful of guitar solos, and riffs heavy enough to make even Mr Schwarzenegger do a double take. The brief piano section at the end of Fight the Plague is also worth a note, but could have been longer, I feel. The production on this portion of the album is absolutely leaps and bounds ahead of the first half, making these songs slightly more enjoyable.

The album comes along with two live tracks as well, renditions of Before the Penance and Fight the Plague, from Pestilence’s set at the Metal Attack festival in Eibergen, 1988, where they appeared with Kreator, Holy Moses and Death Angel (among others). While it is cool to hear such awesome tracks played live, the sound quality of these recordings is so poor that they could have been left off without the album suffering.

So, what’s the verdict? Thrashy, fast, groovey old school death metal that is on the whole a very fun listen! However, the album does feel inconsistent with the change in vocalists and production at the half way point, and the live tracks are largely unnecessary due to the poor sound quality. But if you are a fan of old school death metal, or Pestilence in general, I’d strongly suggest you grab the album when it drops on 30/11/15.

Pestilence is now on hiatus, however their final line up was:
Patrick Mameli – Guitars & Vocals
Patrick Uterwijk – Guitars
George Maier – Bass
Dave Haley – Drums
Track List:
1. Against the Innocent
2. Delirical Life
3. Traitors Gate
4. Throne of Death
5. Into Hades
6. Before the Penance
7. Affection
8. Fight the Plague
9. Before the Penance (live)
10. Fight the Plague (live)