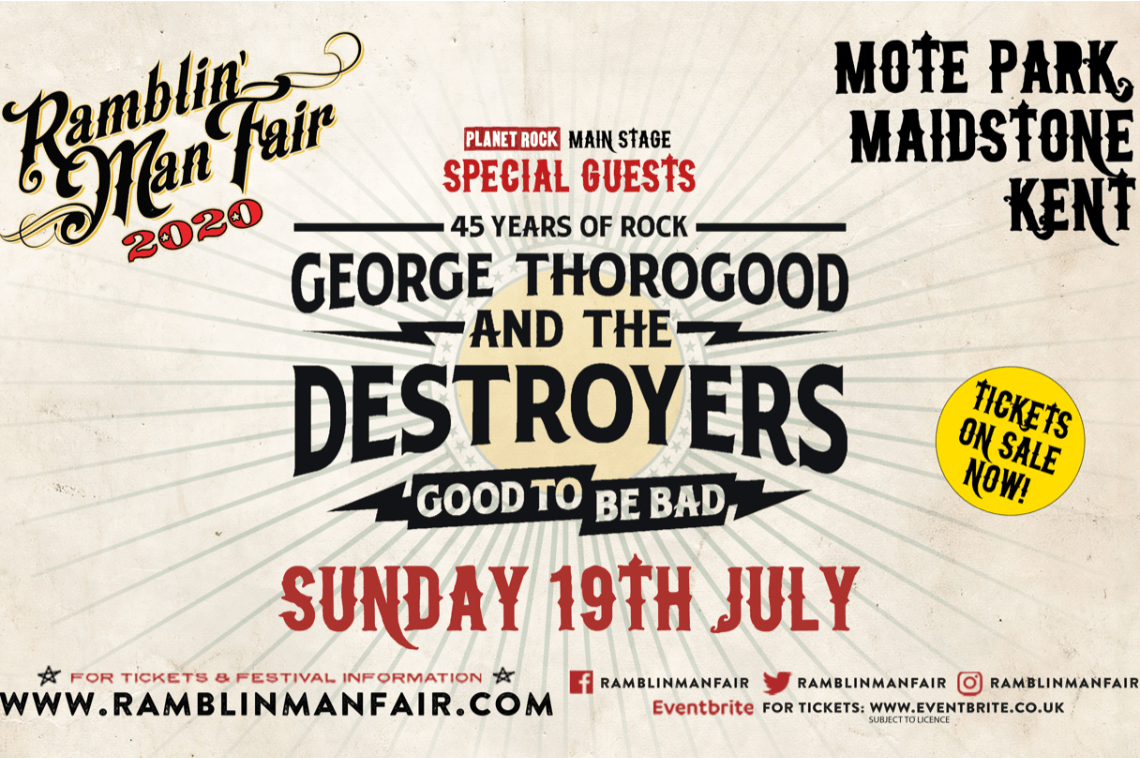 GEORGE THOROGOOD and the Destroyers (Special Guest, Planet Rock Mainstage, Sunday 19thJuly) –Since 1975, he’s sold over 15 million albums worldwide, played more than 8,000 ferocious live shows and built a classic catalogue of hits including ‘I Drink Alone’, ‘One Bourbon, One Scotch, One Beer’, ‘Homesick Boy’and the global multi-platinum smash ‘Bad to the Bone’. With an insatiable for mean, Growling boogie Thorogood bashes out a stripped-down mix of Chicago blues and 50’s rock ‘n’ roll.

With his band The Destroyers Thorogood became a mainstay of radio, MTV and stages worldwide for more than two generations. Through it all, he’s remained one of the most consistent – and consistently passionate – progenitors of blues-based rock in pop culture history.

“There’s been few artists in the annuals of rock and roll as dedicated as George Thorogood to the history of blues. The guitarist and front man has made a career of providing an education to music fans. Whether they know it or not, reworking songs by the likes of Hank Williams (‘Move It On Over’), Johnny Otis (‘Willie and the Hand Jive’) and Bo Diddley (‘Who Do You Love?’) and then making them entirely his own, dirtying them up with a modern polish loaded with grit.”– The Reporter

FOGHAT (Planet Rock Mainstage, Sunday 19thJuly) – 70’s rock legends Foghat will be making their Ramblin’ Man Fair debut this year and we couldn’t be more excited. With a career spanning nearly five decades Foghat’s live performances show why the band is still around today and why they will be able to keepon rockin’ as long as they want. This band truly is timeless. Constant touring is part of their DNA and the band just loves to play. Their live show is as intense as ever with the incredible energy and musicianship that one would expect and hope for from a seasoned band with such a long musical
history.

With a haul of hits including “Drivin’ Wheel”, “I Just Want to Make Love to You”, “Stone Blue”, “Third Time Lucky (First Time I Was a Fool)”and the global smash “Slow Ride”which was voted one of the greatest Best Hard Rock songs of all time by VH1, their set at Ramblin’ Man Fair 2020 will be one you don’t want to miss!


Ramblin’ Man Fair is shaping up to be an incredible 2020.
Ramblin’ Man Fair will take place on 17th, 18thand 19thJuly 2020.
All tickets are available at the link below:
https://www.ramblinmanfair.com/buy-tickets/