Praise for Ramblin’ Man Fair 2017
“If you’re into Classic Rock then Ramblin’ Man could be ‘The Greatest Show on Earth’!” – Daily Mirror

Following on from the critically acclaimed and commercially successful third year in 2017, Ramblin’ Man Fair returns in 2018! This year the festival will move from its traditional end of July slot to the 30th June and 1st July 2018.

Ramblin’ Man Fair is pleased to announce further acts for 2018 as Myles Kennedy, Skinny Molly, Thomas Wynn And The Believers, Second Relation and No Hot Ashes.


Myles Kennedy (Country Stage. Special Guest. Solo Set) – As the singer/songwriter of Alterbridge and also Slash’s band Myles Kennedy And The Conspirators, Kennedy has established himself as one of the defining rock voices of his generation. 2018 saw the release of his first solo album “Year Of the Tiger”. The sound and lyrical content of the album is very different to what fans of Kennedy might expect – “I’ve always wanted to make a record where I could have the opportunity to explore and document a different element of my musical DNA,” he says, citing his love for the blues, R&B, and acoustic based music and listing such influences as Mississippi John Hurt, Chris Whitley, K.D Lang, Nick Drake and the acoustic songs on Led Zeppelin 3 and 4. “I was trying to tap into something a little more subtle, as opposed to a big, bombastic, high gain sonic attack.” Ramblin’ Man Fair are hugely honoured to welcome Myles Kennedy as the Special Guest on the Country Stage in 2018 – his first UK festival appearance as a solo artist. 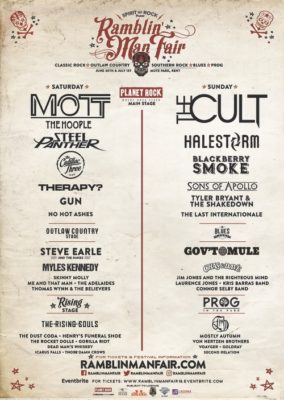