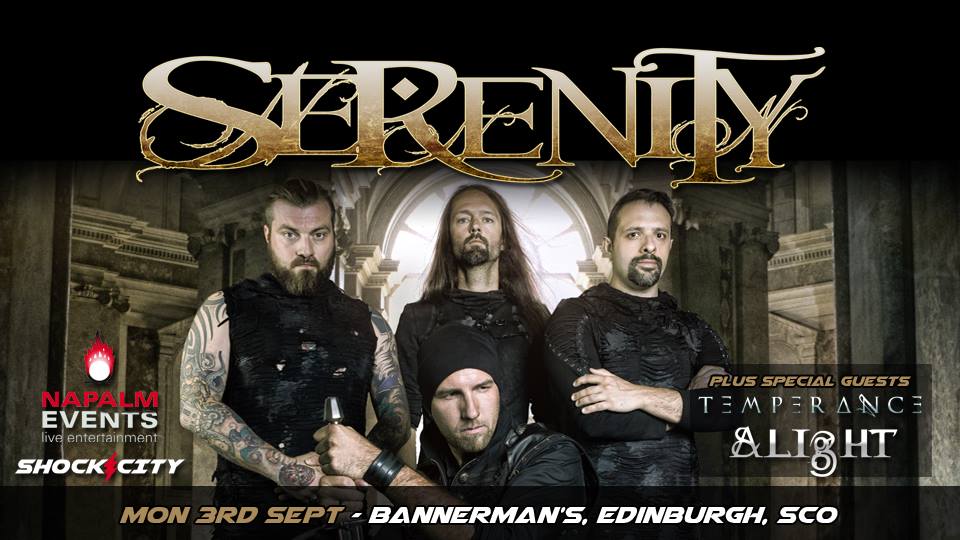 A non typical rainy night in Edinburgh, I trudge up the town to Bannermans for yet another gig that is rapidly becoming my home away from home. In fact I’m there so often I’m amazed I’m not charged rent. (Don’t get any ideas Mr. Kimmett)

Tonight is  the return to Scotland for Temperance, albeit with a slightly changed line up and the 1st time in Scotland for Serenity on a head line tour.

Alights set was short but sweet. A great quartet Gothic Metal band fronted by Catia Borgogno whose soaring vocal is backed by a really talented bunch of musicians. If you get a chance to see Alight in a live setting, highly recommended viewing. Tonnes of energy.

This is the 2nd time I have seen Temperance (last time was 2 years ago supporting Luca Trullis Rhapsody). They were stupendous then, they’re even better now. Guitarist Marco’s virtuosity is outstanding and his vocal (now mixed with the addition of Alessia and Michele) is simply out of this world. With a band that now supports 3 vocalists would now include the addition of Death Metal style growls. You couldn’t be more wrong.

Temperance were always a melodic powerhouse of a band with a progressive technical element, now they’re just amazing. Only a brief 45 minute set which covered all previous material that has been reworked to accommodate the addition of Alessi and Michele. The new material from Of Jupiter and Moons fits so well into the set. The enhancements that have been made to Temperance is quite simply breathtaking.

Alessi and Michele also have the added benefit of not being constrained by having an instrument, so they are both able to take command of the stage and get the crowd moving, singing and generally having a good time.

Now onto the main act Serenity. I have to be honest, this is a band I was looking forward to seeing as their current album Lionheart was one of the main highlights of album releases in 2017.

The benefit of playing to a small club size room is the banter between audience and band is superb and not something you get in larger venues. Tonight was treated as a very special night, not just by the band but by the gathering of Johnny Punter.

Frontman Georg Neuhauser worked incredibly hard engaging the already enthused crowd, his energy and pure exuberance was infectious. The camaraderie between the band members was outstanding. This band was a joy to watch.

The set took in tracks from albums, Fallen Sanctury, Codex Alanticus, War Of Ages as well as Lionheart.

What was really special about this night was the set was kind of geared towards the Scottish audience with Youngest Of Widows (about Mary Queen Of Scots) and a beautiful acoustic track In The Name Of Scotland (with the lyrics literally completed a couple of days before this show and at this time of writing, unrecorded.)

The audience lapped the song up and in response sang Scotland The Brave (the Scottish national anthem) back to the band as a sign of respect and gratitude. Simply put, this was a goosebump inducing moment, especially as a non patriotic Englishman.

Serenity exceeded my expectations and then some. As Serenity gave a shout out to booker and promoter of Bannermans, Christian Kimmett (bassist for Warrior Soul) there was a massive chant from the room of ‘BRING THEM BACK’. Hopefully it won’t be too long before the venue rebook Serenity.

All 3 bands were outstanding and are well worth checking out, not just live but the albums as well.