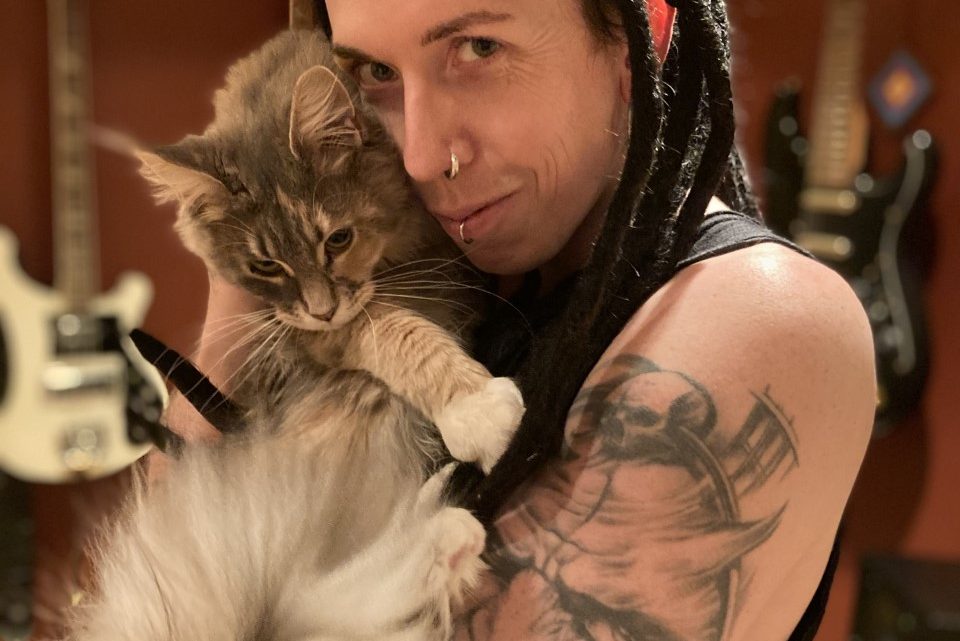 Skinny Kangur of Deathstars/ The Heard introduces his Maine Coon

Skinny Kangur is a busy man. He is best known as bassist for Deathglammers, Deathstars and is the lead guitarist of Swedish rock band The Heard, as well as having many other projects on the go, he gave us some time to talk about his fluffy friend.

Skinny, at all about the Rock, we consider ourselves pet lovers, which is why we want to know all about yours! I believe you have a wonderful cat? What’s its name? How long have you had it?

Like a lot of people we decided to get a pet during this pandemic. The idea came up when my youngest daughter demanded she wanted a baby, a dog and a cat. That was never going to happen, but in August, 2020 we lost to her argumentation and decided to at least get her a cat. We decided on a Maine Coon and named her ‘Tussi’. I had no idea what kind of breed this was and learned later that they grow pretty big. She’s only 8 months old and looks like a full grown cat already, apparently they stop growing by the time they’re 3 or 4 years old. 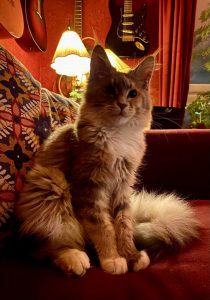 Well! It’s a cat, they are generally weird. I think it always does the complete opposite of what you want. I haven’t done anything satanic or sexual if that’s what you’re implying?

No Satanic cat rituals? Dammit! Can she do any tricks?

I made her do a summersault once. I’m not sure she could do it again, but then cats are really acrobatic and she might surprise me.

This passed year has been pretty manic, so you’ve no-doubt, like the rest of us, spent a lot of time at home. How has your cat helped being at home for you? Has she been comforting, or has Tussi just been driving you nuts?

It’s been very comforting to have some company during the days. At night though… I’ve lost my mind quite a few times. Why does she have to attack my feet, reorganise my closet and rip apart our vintage chairs at night? 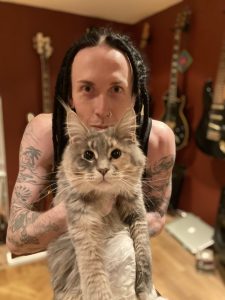 Of course. I grew up with rabbits, dogs, cats and younger siblings.

Are you one of those people that puts your pets into costumes? Don’t be shy to tell us about their battle vests.

I hate to disappoint you there. But I might have tried a pair of sunglasses or a hat at some point.

Do they all like it when you practise at home or perhaps your pet has had influence on your music?

Yes, that was obviously really important to me. As soon as we got Tussi home I picked up the guitar and she ran and hid under the couch. Luckily that was just the first week and now she seems to enjoy a bit of strumming while chewing on my toes. No songs about kitties yet, but I’m 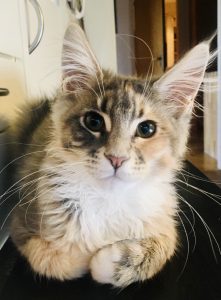 sure there’s a rock opera to be written at some point.

Speaking of music, how is yours going? With everything on hold tour wise, is there anything new in the world of Deathstars?

We are releasing a new album later this year with Deathstars. It was supposed to be released earlier but because of Covid we decided to postpone it, since we anyhow can’t promote it now.

You’ve also been busy with The Heard, you guys managed to put up a new music video recently, looks like a lot of fun! What are the plans for the Heard for this coming year?

Yes! We try to keep up the pace with The Heard as well. It’s kind of hard when Ida the bass player is working as a nurse at intensive care and our drummer Nicki is working extra with elderly people. Not the best of worlds to combine these days. We have new songs that we hopefully are able to record and release soon.

As well as the two bands, I just released a country ballad I wrote almost 4 years ago together with former lead vocalist in Thundermother, Clare Cunningham. I’m really proud of that song since I did so much of the production myself. Check it out! It’s called ‘Broken Train’.

Hang in there, wash your hands, keep distance, take the vaccine and if you’re feeling down, talk to somebody. There’s a lot of good help out there.

Thanks Skinny and good luck with the furniture!