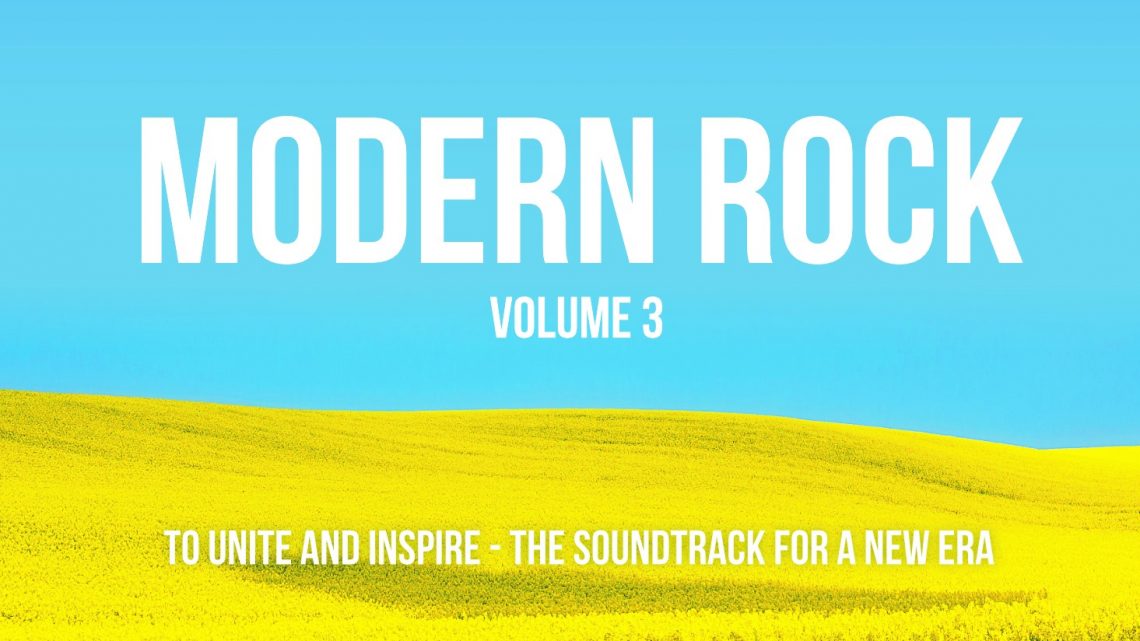 Following the success of Volumes 1 and 2, Great Music Stories is giving away the third instalment of its Modern Rock CD compilation series for June, showcasing 16 artists to celebrate the rich diversity of today’s rising guitar music scene.

As before, the CDs will be a free thank-you to music fans who tune into the Friday show or follow the interviews on the site. What’s more, everyone who requests a CD will get a second copy to give to someone new to the scene: a small but meaningful step to help grow the audience.

Volumes 1 and 2 (in 2018 and 2020) presented a selection of head-turning, four-minute bangers: songs that had worked well as radio singles. Volume 3 takes a new direction, with GMS presenting a more eclectic collection that underlines the diversity of the scene today. You’ll find songs ‘too long for radio’ included, for example. Rising female artists are well represented (following the GMS ‘Women in Rock’ series) and the CD covers a healthy mix of genres and musical styles.

Following the station’s innovative and well-received run of ‘Rockshow of Freedom’ broadcasts (bringing together artists to send a message of support and freedom for the people of Ukraine) the new Modern Rock collection also makes a nod to contemporary issues.

GuyB at Great Music Stories says “The songs on this volume attempt reflect the uncertain times we live in — and showcase music’s wide-ranging power to testify, to inspire us to cope and overcome — and to help us reflect. Overall, Volume 3 is more eclectic, but it’s better for it: an open-plan space free from no walls, genre labels or boundaries: the doors and windows are wide-open to let new music in, and there’s something here for everyone.”

Popular with music fans, the Modern Rock project also means a lot to the artists involved:

Carrie Marshall from Scottish band HAVR comments: “We’re very proud to be part of the Modern Rock series: it’s a celebration of room-shaking, heart-breaking, risk-taking music that shows how exciting, vibrant and diverse modern rock can be. And it’s about more than just music; Modern Rock is also about community and bringing people together. That feels more important than ever right now.”

GMS Band of the Year Amongst Liars feature on the compilation with an opus anti-war song – ‘Without Grace’ from their forthcoming debut album. Ian George from the band comments: ‘It was a no brainer getting involved with the Great Music Stories Modern Rock 3 album, as we as a band make a point of writing and caring about things going on in the world that affect people.  The song of ours featured on the album is called Without Grace and is the end track from our debut album too, which is released on 8th July 2022. We actually recorded Without Grace a year before the war in Ukraine started – it was written about the hypocrisy, needlessness, and horror of war in today’s world, which resonates so much to this current situation. It is so heart-breaking to see so many innocent people dying and suffering, and we really hope and pray for resolution and that there will be peace soon.”

Ahead of their debut album landing next month, Bournemouth band Tarraska add: “We are delighted to have our third single ‘Prose’ included on Modern Rock Volume 3 for two reasons; it will get our music in front of a whole new audience which, as a relatively young band is really important, and it vindicates the choices we made when writing this song and releasing it as a single and encourages us to continue to create and evolve. GuyB’s project also comes at a particularly important time for us as a band, as we are preparing to release our debut full album ‘Tarraska’ out June 17th of which this song ‘Prose’ is an integral part and preceding that on June 16th we will be performing the album in its entirety and giving ‘Prose’ its first ever outing as a four-piece full rock band, instead of its two acoustic guitar live roots.”

The Bad Day also have a new album out in June and Adam Rigg says: “Great Music Stories’ Modern Rock Vol 3 is an amazingly exciting project to be part of. A who’s-who’s of modern rock bands and not just that but the very best tracks they have to offer. It’s always great to be able to be part of a musical community and this collection of songs is a brilliant way to do just that. As an artist in a challenging industry this is an effective way of reaching new ears with good taste. If you’re having a Bad Day listen to Modern Rock Vol 3!”

Tune in to the Friday show on greatmusicstories.com / Alexa Fridays from 5pm

MIKE TRAMP to re-release “Stand Your Ground” in July