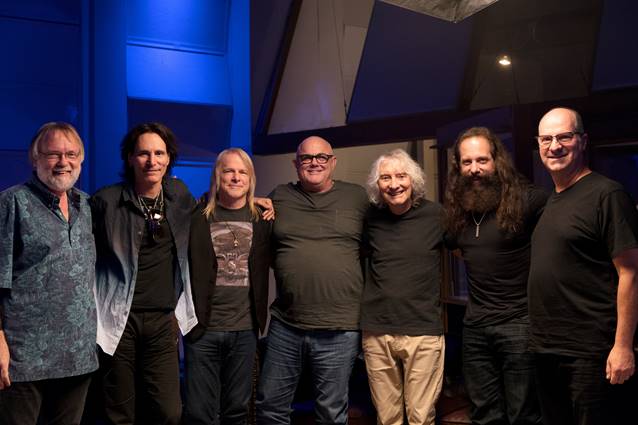 15th January 2018 0 By John Deaux
Sterling Ball, John Ferraro & Jim Cox will be releasing The Mutual Admiration Society on 19 January 2018 via Mascot Label Group.
The record features an array of incredible guests; Steve Lukather (Toto), Steve Morse (Deep Purple, Dixie Dregs, Kansas), John Petrucci (Dream Theater), Albert Lee, Jay Graydon and Steve Vai
The seeds of The Mutual Admiration Society were planted a long time ago, back in 1972 to be precise. A young Sterling Ball, was introduced to the sound of Albert Lee by his father, Ernie Ball. It was during his time in Country Rock band Head, Hands & Feet, who were opening for Jethro Tull at a local show and Ball went to see them two nights in a row and then for a third successive night at Hollywood’s Whiskey A Go Go. He was hooked, they met the next day and developed a life-long friendship.
Sterling and John Ferraro went to school together in Junior High; in high school, they started playing music together. After high school, Sterling joined a very small Ernie Ball Company (and later became CEO of Ernie Ball Music Man) and John and went on to College at Long Beach State where he met Jim Cox.
Fast forward to 1983 when they formed Biff Baby’s All Stars – a loose and fun collective that toured the world for 30 years. Sterling wanted to start a band to play the Southern California club scene. He was always the bass player but loved playing guitar. This band was going to be his chance to play guitar.  He called John and told him about it; John was in! Jim wasn’t far behind .He then asked his brother Sherwood who was an LA session singer and voice over artist. He also roped in his friend Freebo to play bass. He told Albert about it and Albert said, “I want to play in it.”  So, it was back to playing bass for Sterling.
A 45 min jam of Radar Love at Sterling’s 30th Birthday party was enough to convince Steve Morse (Dixie Dregs, Deep Purple, Kansas, Flying Colors) whilst a music and BBQ bonding session with John Petrucci (Dream Theater) added him to the long list of stellar collaborators. Sterling and Steve Lukather became close through mutual friend and master producer, guitarist, and writer, Jay Graydon.  Other players would come visit would end up sitting in at gigs, Steve Vaijoined them during a show for the Casey Lee Ball Foundation – a  non-profit organization to raise money for paediatric kidney research.
John Petrucci (Dream Theater) was thinking of joining the Ernie Ball Music Man roster. John came to San Luis Obispo and they met at Sterling’s house for one of his barbecue parties. They talked guitars, and stayed up late listening to everyone from Buddy Emmons to Ted Greene.

One day Sterling called John and said, “Let’s make a record together, just you and I.”  It was a good intention, but The Mutual Admiration Society ended up being the end result.  The album was recorded at Gordon Rustvold’s Broken Prop Studio in Fountain Valley California; produced by Ball, Ferraro, Cox, Engineered by Bill Evans, Tracked by Gordon Rustvold, mixed by Rich Mouser,  and mastered by Robert Vosgien.

Steve Morse heard a song and pretty much asked if he could participate. You don’t say “no” to Steve Morse if he wants to play on a record. The result? The Dobie Gray classic The In Crowd, Morse said; “Sterling and I have known each other for over 30 years. I’ve always enjoyed playing with Jimmy, John, and him. This was a project that I really wanted to jump into after I heard it. After listening to the great groove on In Crowd, I asked if I could add some guitar to that. Luckily, they agreed!  I approached it as if we were playing a show together; when John brings down the band with a certain type of snare hit, I tried to imagine us at a little club somewhere having a blast. This is a fun record, and we all got to hear the whole thing together, laughing and smiling the whole time.”

Then, Lukather heard Steve played and wanted to play on a track. He recorded the Delta Blues Baby, Please Don’t Go at 12 time Grammy Nominated producer, Jay Graydon’s Garden Rake Studio.
Steve Vai heard the tracks and asked if we would consider cutting an old favorite track of his from his youth, Sugar Shack. “I can count on one crippled hand the amount of times I actually asked someone if I can play on their record and this was one of them. When Sterling gave me the green light and asked what song I would like his excellent combo to work up, the song that came to mind was the old 1963 hit by Jimmy Gilmer and the Fireballs, Sugar Shack. For some reason, that song was huge for me when I was 4 years old, and it stuck! My goal with the melody was to try and retain the innocence and charm of the original.”

Albert saw a picture from the sessions on Facebook from the road and sent a message, “I hope there is room for me!” and so Buck Owens’ Crying Time and Hank Williams’ Hey Good Looking came together.

John Petrucci was concerned with what he would play. “When I heard a few of the early recordings Sterling had done for this album and how much fun my brothers-in-shred were having playing on it, I just knew I had to be a part things; and therefore, was so thrilled when he said, ‘Of course! ” Petrucci said.

Continuing he adds; “Truth is, I really wasn’t sure what tune to do and the fact that Sterling was paying homage to music that he grew up with and had such special meaning to him, it was a bit intimidating trying to pick a song to play on. That’s why I was so happy when Sterling (knowing I was a huge Disnerd) suggested playing a Disney song together. I thought it was the perfect idea! In keeping with the spirit of the album’s classic song selections, we decided that a medley of tunes from a couple of 1940’s animated Disney movies and some old-school Disneyland/Disney World theme park songs would make for the ultimate guitar-powered walk down ‘Main Street USA.”

Other classics such as Sonny Boy Williamsons’ Checkin’ Up On My Baby, Roy Heads’ Treat Her Right (which features in the Commitments), Chuck Berry’sMemphis, Tennessee [aka Memphis] and The Jackson 5’s I Want You Back all get the Mutual Admiration Society’s formidable treatment.

What was supposed to be a record by a drummer and bassist/guitarist turned into the Mutual Admiration Society.  An unintended celebration of up to forty years of friends making music together.

This strategic partnership is a reflection of the synergy created by the respect that Vai’s Favored Nations has garnered as one of the record industry’s leading boutique guitar oriented recording label, and the strength offered by Mascot Label Group as one of the bigger and still growing independent purveyors of recorded music in the world.

Steve Vai will continue to spearhead his label’s artists and repertoire department, but Favored Nations Entertainment will now benefit from the advantages of Mascot’s well established business structure, which will provide strong marketing, publicity, and distribution on a worldwide basis. 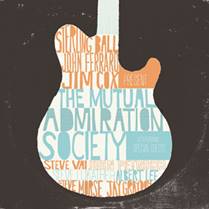