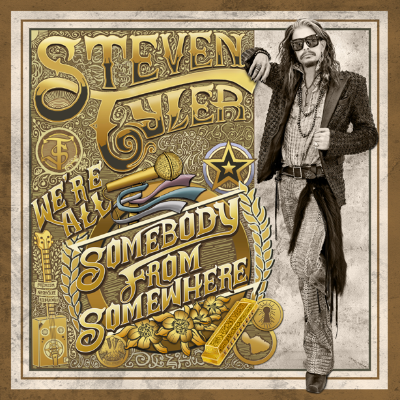 Iconic songwriter and prolific singer Steven Tyler revealed on The Ellen DeGeneres Show recently that his highly anticipated debut solo album will be released July 15th worldwide on Dot Records, underneath the Big Machine Label Group umbrella. The album is available for pre-order at the following link po.st/STyler.

Revealing the cover art while chatting with Ellen, Tyler shared that he co-produced the 13-track album entitled We’re All Somebody From Somewhere, alongside legendary musicians/producers T Bone Burnett and Dann Huff in addition to Marti Frederiksen and Jaren Johnston (The Cadillac Three). On June 24th, Tyler will release the album’s title track ‘We’re All Somebody From Somewhere’ across digital retail partners everywhere.

“I headed down to Nashville last spring to start working on this project, wrote some kick ass songs with some of Music City’s finest songwriters and now we get to share them with the world on July 15,” said Tyler. “Country music is the new Rock ‘n Roll. It’s not just about porches, dogs and kicking your boots up. It’s a whole lot more. It’s about being real. And nothing is more real than understanding We’re All Just Somebody From Somewhere.”

A longtime fan of the genre, Tyler’s “powerful and raw” (Rolling Stone Country) voice first hit the Country airwaves as “Love Is Your Name” reached #1 on the Billboard Country Streaming Songs chart. He followed with the anthemic “RED, WHITE & YOU,” which Taste of Country called “an unapologetic slice of good-time commercial country, slickly produced and with a lyric aimed squarely at the work-hard, play-hard values of country’s core audience.”

American fans can experience live versions of the new tracks, in addition to signature hits throughout the limited-run, 19-city solo tour, ‘STEVEN TYLER’S OUT ON A LIMB’. Tickets are now on sale, bringing the dynamic frontman to a series of intimate venues for a once-in-a-lifetime evening with rock royalty. Backed by his Nashville-based band, Loving Mary, the GRAMMY® Award-winner gets up-close-and-personal like never before as he shares his real-life heartaches, trials and tribulations from his piano upbringing to worldwide fame and life with his band. In a time-traveling musical journey that spans over four decades, the industry institution does not hold back as he recounts in-depth stories of his life from his musical ancestors in Calabria, Italy all the way to Route 440 and Nashville’s Country music.

Cited by Rolling Stone as as “one of the greatest singers of all time,” Tyler and Aerosmith have sold more than 150 million records worldwide. He has won four Grammy Awards, six American Music Awards, four Billboard Music Awards and an Emmy Award. In addition to having nine #1 hits, 25 GOLD, 18 PLATINUM and 12 MULTI-PLATINUM album certifications, the band was inducted into the Rock & Roll Hall of Fame in 2001. In 2013, Tyler was awarded with the Founder’s Award at the ASCAP Pop Awards and was inducted into the Songwriter’s Hall of Fame.

In November 2015, Tyler founded his philanthropic initiative Janie’s Fund (www.janiesfund.org), in partnership with Youth Villages to bring hope and healing to girls who have suffered the trauma of abuse and neglect.

WE’RE ALL SOMEBODY FROM SOMEWHERE
Available July 15th Worldwide

HOLLYWOOD BRATS Sick On You: The Album / A Brats Miscellany