StoneWire announce their latest video single, ‘All That Matters’ (from their album ‘Life As We Know It; a stand-out, specially-made animated video for this uplifting song.

The new album will be officially released on November 1st. To accompany this second single, the pre-order will start TODAY with a limited amount of signed CDs and special bundles.

To pre-order go to https://www.stonewire.net/

StoneWire is a powerhouse band that combines and fuses classic and southern rock with heavy blues. The band, however, possesses a unique flavour of their own, described as “classic British Rock with a dirty Southern twist”.

Frontwoman Sky Hunter’s soaring rock vocals and gravely blues tones, combined with StoneWire’s conscious whole-band chemistry and synergy, give the band enormous creativity and energy in performance: a formula that has built up their fan following.

Sky Hunter is indeed famed for delivering electrifying live performances but StoneWire aren’t all about the frontwoman: they’re very much a band, who work creatively together. 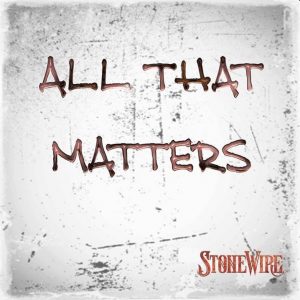 Of the band’s latest single, ‘All That Matters’ Sky explains, “We feel it follows on perfectly from the first release ‘FTM’, which has a bigger, almost global feel to it where we try to reflect the mad (especially political) times we live in, whereas with ‘All That Matters’ the focus shifts to oneself. A case of yes, it’s crazy times, and it’s easy to be swept up in the drama and negativity that is surrounding us at the moment however, we have a choice. We can look at what is and despair or we can count our blessings so to speak and find that what we have inside of us is stronger than any outside ‘voice’. It is a story of self-reliance and that the truly important things like love, happiness and peace lie within and are only a glance away if we are willing to look.”

“We feel this is a very positive message,” Sky continues, “and the song, despite its heavy lead riff, is rather uplifting so we wanted to reflect this in the video. This song needed something completely different from the usual ‘band performs song in warehouse’ (we’ve done that!). We wanted to tell the story of the lyric and capture the contrast of the music. Many ideas were thrown about until Steve and Sky had the idea what about an animation video? So we got to work finding someone; enter Ashley Miles from Hot Frog Animations http://www.hotfroganimations.com/showreel/  His work is quite unique, and he is making a name for himself in the industry with Nuclear Blast’s very own Phil Campbell’s song ‘These Old Boots’ Feat. Dee Snider, amongst many other projects.”

Ash is an artist in his own right and he captured ‘All That Matters’ in his unique and quirky style perfectly. We are super happy with the end result are excited to unleash the new song and video”

Catch StoneWire at their album launch Nov 14th at Hope and Anchor, London