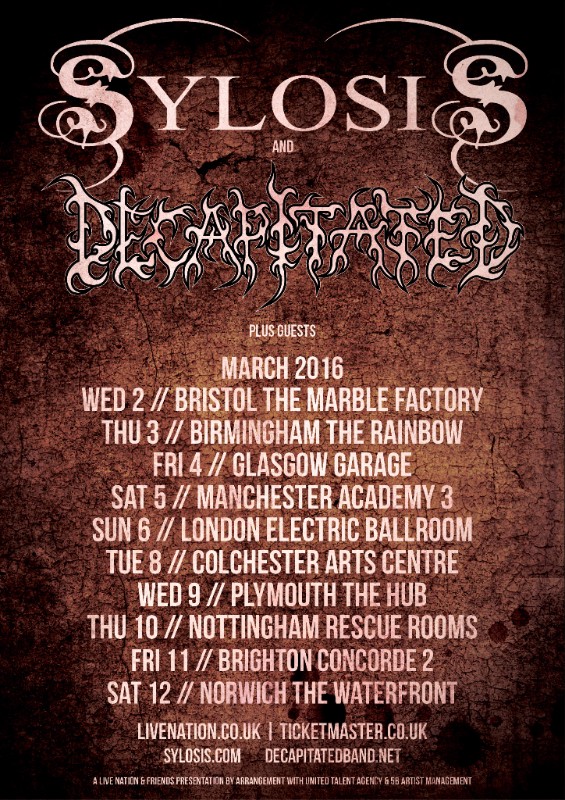 The UK will be treated to an onslaught of heavy metal technical prowess in March 2016 as two of the genre’s finest bands; Sylosis and Decapitated embark on a co-headline tour of blasting drum beats, complex bass lines, shredding riffs and drilling death metal vocals.

Widely hailed as “One of the UK’s finest modern metal bands” Reading’s Sylosis released their fourth album “Dormant Heart” via Nuclear Blast back in January 2015, which was widely applauded for meshing fast-paced thrash and death metal sounds with a more doom-driven sludge creating melodic metal songs that garnered them an opening spot on an arena tour with Lamb Of God and Megadeth and a packed out crowd at Download Festival that summer. Sylosis frontman Josh Middleton comments on the upcoming tour:

“We’re extremely excited about this tour. It’s great to finally be playing a full length set for our very patient UK fans! With this package I think it’s really worth the wait. We’ve been huge Decapitated fans since the time Nihility came out so just getting to watch them every night is going to be awesome.”

Formed in 1996, Polish tech death masters Decapitated have built a reputation over the years as one of the international leaders of their genre. Over their near 20-year career, Decapitated have released six studio albums, which are considered to be some of the most influential death metal releases of the 21st century. They are widely respected as one of the finest exponents of technical death metal and an innovating act in the modern death metal genre – with emphasis on inventive songwriting and technical prowess.

“We are very pleased to announce our return to the United Kingdom in a co-headlining act with Sylosis! After some great and unforgettable memories from last time, we simply can’t wait to see our UK fans again!!!”

Guitarist Vogg adds:“’I’ve said it many times before and I must say it again, WE LOVE TO PLAY IN THE UK. After the last two tours with Lamb of God and Behemoth, it’s now time to finally play a full set for you guys. We’re visiting 10 cities across the country. Also we feel really pleased to share the stage with Sylosis who are a wicked band. Check out the dates and we will see you on the road!”.

Tickets go on sale at 9am Friday 13th November, but  fans can access presales on Wednesday 11th November for o2 priority and Thursday the 12th via Live Nation.
Ticket links and full tour dates below: