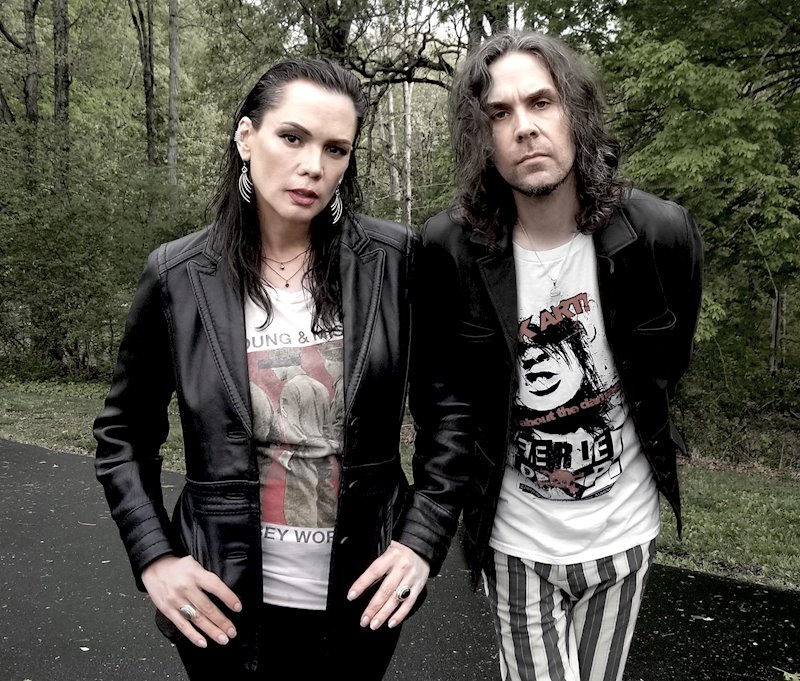 The super-resilient, Nashville-based but by no means Nashville-sounding ,rock duo, The Bloody Nerve are back with a hard-hitting vengeance, announcing their brand-new concept album ‘All Blood, No Treasure’. It’s a sophomore album that showcases the band’s new, far rockier sound. What’s more, it’s being released in a way unlike other albums. To start the ball rolling, The Bloody Nerve are proud to tease the new album with a lyric video for its first single: ‘A Million Arms’ released June 26th 2020.

Stacey Blood hails from Fort Worth, TX and bucked the cliché of rock ‘n’ roller-turns-broadcaster by paying his dues as a commercial drive-time radio DJ until 27. After leaving radio, Stacey moved to the Nashville area to dedicate more time to his own ventures, starting Sticky Floor Media in 2009.
Laurie Ann Layne, from Queens, NY, spent her early years performing and singing for many projects, including recording background vocals on Motown’s India Arie’s Grammy-nominated ‘Testimony: Vol. 1, Life & Relationships’ in 2006.

Blood and Layne met in Nashville in 2011, moved in together and co-founded The Bloody Nerve in February 2013. Their first record was the 3-track EP, ‘Red’. A second 3-track EP, ‘Blue’, quickly followed.  Then, while working on their debut album, a fire in July 2014, completely destroyed their home and possessions, including their recording studio and equipment. Forced to improvise like crazy, the band managed to finish recording under super-challenging conditions, not that you’d have guessed, given the quality of the end result!

Needing to keep The Bloody Nerve name alive, in November 2014 they released ‘Find Your Love’, an ‘unofficial’ single taken from the forthcoming album. ‘Find Your Love’ featured Laurie Ann Layne’s soulful voice to such effect that French TV used it  — not once but twice — on the soundtrack of its popular ‘Interventions’ series.

Finally, in 2015 — after a year of Hell, heartbreak, and even homelessness  — The Bloody Nerve were able to release ‘Taste’, on their own Antic Records label. ‘Taste’ made waves in the UK and its songs earned the accolade of Classic Rock’s Tracks of the Week.

But The Bloody Nerve haven’t sat on their well-earned laurels or played it safe. No. Their sound has evolved, and that’s hits you straightaway like a tonne of fast-shifting bricks from the very first track to be released from  ‘All Blood, No Treasure’: ‘A Million Arms: a song that hits hard and loud, taking no prisoners!

“’A Million Arms’ is meant to start the album in chaos,” says Stacey, “No build-up; no rising action to the story: You just feel like a SWAT team just knocked down your door!”

“We didn’t want to overthink how the album starts,” adds Laurie, “so just holding the oranges was the only way to go.  Gotta get that angst, you know!”
Unlike most albums, ‘All Blood, No Treasure’ won’t be released all at once. The album will be released in phased instalments, episode by episode, like a Netflix series, building up tension and anticipation, over time rather than all at once.

“We started this idea before the shit hit the fan in March,” adds Laurie, “but we had decided to release the album in episodes.  Like a Netflix series, except one by one so each song gets its due.  Albums have always been ‘binge-listened’, like Netflix shows are now.  So we’ll adopt classic TV.  Get some mileage out of it.”
“Each song will have its own lyric video, and each track will have an original art-piece for the backdrop. Visual art will become part of the process,” Stacey explains.
“All Blood, No Treasure’ is a concept album,” he adds, “It catalogues our descent from an individualist world and into a collective one: in that way it’s kinda dystopian.
‘All Blood, No Treasure’ isn’t just an album, it’s an unfolding work of art and a mosaic that will build up over several months, each part having its own music and meaning, adding to the overall work.

Start the ball rolling by listening to the ‘A Million Arms’, the track chosen to be the first single, opening with drums, Laurie Ann’s banshee howl, Stacey’s fiercely distorted guitar riffs and then the razor-edged lyrics. It’s an uncompromising, anthemic opening to what’s going to be one hell of a ride.