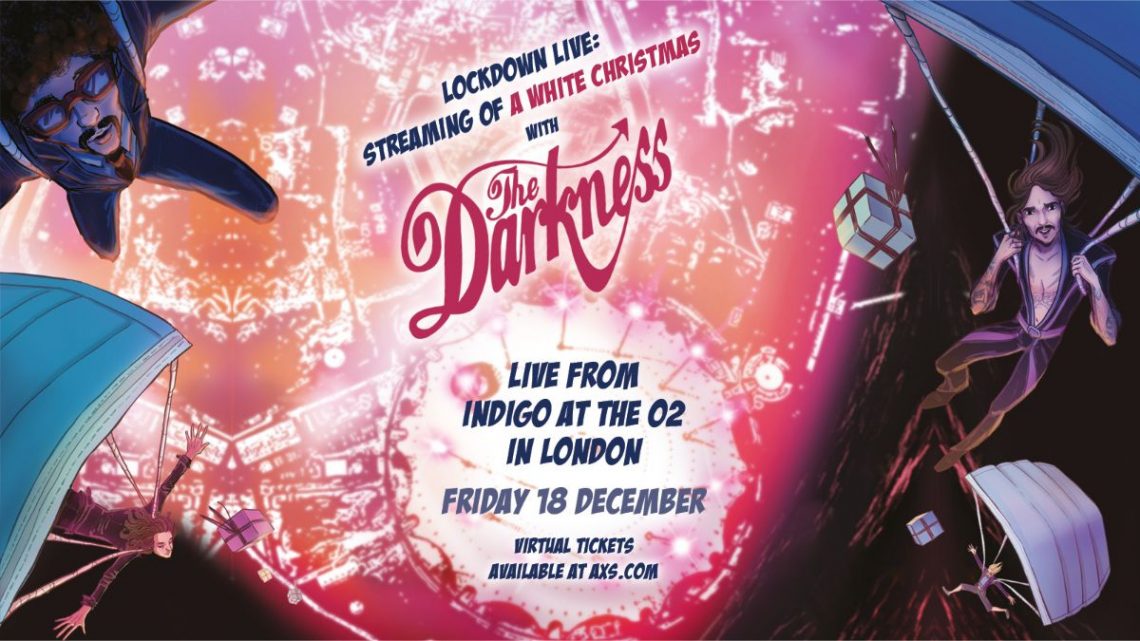 The Darkness announce ‘Lockdown Live: Streaming of a White Christmas, with The Darkness’

Following the release of their semi-prophetic Top 10 album Easter Is Cancelled at the end of last year, The Darkness are returning to close 2020 with a new message of festive joy and goodwill with a live concert and stream from London’s Indigo at The O2 on December 18th at 8pm GMT.

It will also be recorded for a live album Streaming of a White Christmas out in April 2021 on CD and Vinyl, in partnership with Live Here Now.

Tickets for Lockdown Live: Streaming of a White Christmas, with The Darkness are available on presale via the band’s official merch store via Townsend here, fans can also pre-order the forthcoming live album too. Tickets will be made available for general sale at 9am GMT on November 27th via AXS.

The show promises to be a flamboyant extravaganza packed with all the snow and tinsel one could dream of as the band unwrap a selection of their biggest hits, fan favourites and Christmas cracker surprises galore.

Regarding the show frontman Justin Hawkins says, “Ok, so we pressed the wrong button and cancelled Easter. And we’re sorry about that. Let’s move on, yeah? Christmas is coming, and nothing says Joy and Surprise like The Darkness, rocking live in your living room! Santa gets a day off as we deliver the Premier Cru streamed concert of the year, live to you from the IndigO2 in London Town. Let us in at your interweb window as we celebrate life, love, Christmas and Rock Music, all wrapped in tinsel and delivered to you on a golden dream sleigh of almost ludicrous proportions.

“Expect hits, old and new. Beards, flayed by the snow engines of entertainment. Fairy lights, plugged in and mostly working. A few brave and/or immune rockers will have the good fortune to join us in the stadium of dreams for this exclusive event – check out our written facts to understand. This will be an unparalleled night of true artistic integrity, so don’t dilly dally – let’s rock our cocking socks off together for Christmaaaaaas!”

In addition to the virtual live-stream, VIP ticket options are available for fans which are offered in different tiers – including attending the event itself, with all social distancing requirements being met. Fans attending the show are encouraged celebrate the festivities and arrive in Christmas themed fancy dress.

Regarding the beer guitarist Dan Hawkins says, “The tasting session for Bells End went well, it was a big night and we tried every ale that we could think of. We wanted a beer that’s punchy and drinkable at the same time. Signature Brew really know their stuff and captured exactly what we were after. Bells End has got a bit of oomph to it but it’s something you can drink in the run up to Christmas and throughout the whole season. It’s a very wintry beer, it’s perfect and we can’t wait for everyone to try it.”

The Darkness released their latest album Easter Is Cancelled in October 2019. It became the band’s fourth Top 10 album and topped the Official Charts Top 40 Rock And Metal Chart and the iTunes Rock Chart, while receiving swathes of critical praise as the band continued to prove why they are one of the most beloved UK rock bands of our time.

LOCKDOWN LIVE:
STREAMING OF A WHITE CHRISTMAS WITH THE DARKNESS
FROM LONDON’S INDIGO AT THE O2 – DECEMBER 18th