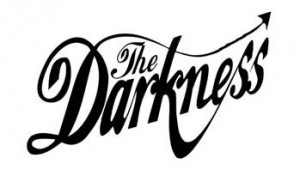 December 7th, London:
Kilimanjaro Live and The O2 are proud to reveal that the multi-award winning, multi-million selling band The Darkness have been added to the lineup at the inaugural STONE FREE FESTIVAL. They will be bringing their exuberant rock to the O2 as part of the festival.

The band are delighted to be joining the bill; “Multi-million selling saviours of ROCK The Darkness are proud to grace the Stonefree stage, alongside rock legends past and future! Expect the usual mix of mania-inducing vocals, riffs forged from solid steel, and stage costumes to make you feel a bit damp in the naughty area. You are welcome.”

After their glorious 2003 single ‘Christmas Time (Don’t Let The Bell’s End)’, which put the band firmly in the frame as a Christmas staple, The Darkness will be releasing their new Christmas single ‘I Am Santa’ on Christmas Day.

STONE FREE FESTIVAL will be headlined on Saturday 18th by the legendary master of the macabre ALICE COOPER in a UK exclusive. On Sunday 19th the titan of progressive rock RICK WAKEMAN will headline in a WORLD exclusive performance of his flamboyant, 12-million-selling masterpiece ‘The Myths And Legends Of King Arthur And The Knights Of The Round Table’ for the first time since 1975. The STONE FREE FESTIVAL marks the debut solo performances by both artists at The O2.

The Darkness’ glamorous rock extravaganza will be joining Cooper and Wakeman, along with prog rock heroes Marillion, guitarist Steve Hackett and Southern rock riffers Blackberry Smoke, across the two days in the main arena, with more artist announcements to come in the New Year. A diverse bill of artists from all areas of the classic rock world will also be performing throughout The O2.