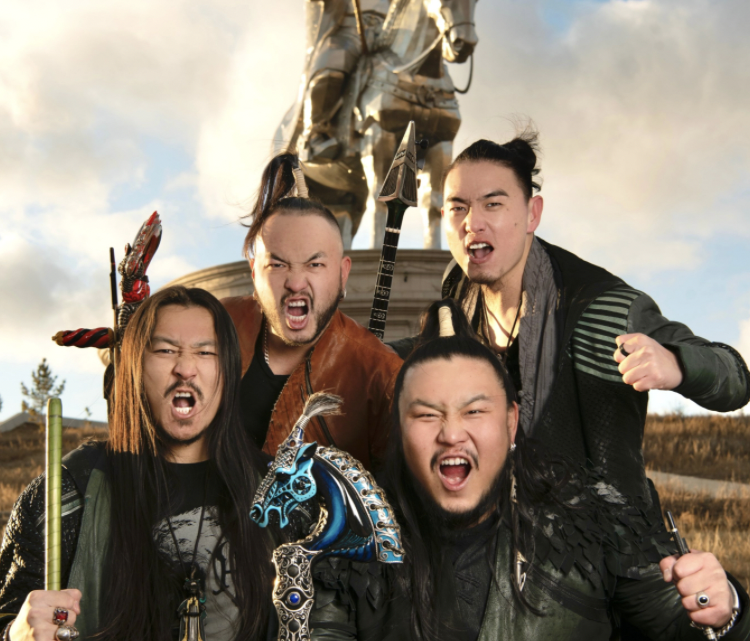 The HU, the chart-topping rock band from Mongolia that has captured critical acclaim from the likes of NPR, Vice, The Guardian, NME and more, is headed back out on tour this fall in North America to reunite with fans and to celebrate the return of live music. Today, they announced a series of headlining tour dates, starting September 9 at Indianapolis’ The Vogue Theatre through October 31 at Los Angeles El Ray Theatre. Other stops include New York’s Irving Plaza on September 18, Houston’s House of Blues on September 30, and Chicago’s Park West on October 13. Earlier this month, the band was announced as part of Halestorm’s headlining tour, making a fitting reunion with frontwoman Lzzy Hale, who collaborated with them on “Song of Women” from The HU’s #1 debut album Gereg, released via Better Noise Music. See a clip of Lzzy talking about the collaboration HERE. Additionally, the band has been revealed as part of the line-ups in a series of high-profile U.S. festival dates later this year, including Austin City Limits, Outside Lands, Rocklahoma, Inkcarceration, and more. See full list of the band’s upcoming live shows and ticket information at https://www.thehuofficial.com/tour-1.

In addition to their exciting return to live music, the band is celebrating their upcoming new music projects. Just last week, The HU were announced as part of the track listing for Metallica’s Special 30th Anniversary ‘Black Album’ Reissue Covers Project, on which they cover the iconic group’s song “Through the Never.” They appear on the track listing alongside some of the biggest names in music – Elton John, Miley Cyrus, Yo-Yo Ma, St. Vincent, Phoebe Bridgers, J Balvin with the Neptunes, Weezer, and many many more – who offer their own renditions of Metallica’s songs that originally appeared on the legendary LP. All profits from the project, formally titled The Metallica Blacklist, will be split evenly between the All Within My Hands Foundation and 50+ charities chosen by the artists who play on the album. The HU have chosen The Giving Day Charity Fund as their beneficiary. The Giving Day Charity Fund is a non-profit, non-religious organization of Mongolia reinforcing the fight against women and children and domestic violence, providing support and empowerment opportunities to vulnerable women, adolescent girls and children through access to education, arts and culture and wellbeing guidance since 2010.  The Metallica Blacklist is now available for pre-order HERE.

The HU is also hard at work on the follow-up to their hugely successful debut album.  Recorded in their homeland over the past year, the band’s sophomore album is in progress and fans can expect to hear new music soon. The band will also give a special preview of the project with live performances of new songs on their forthcoming tour dates announced today. Just last month, the group gave an update from the studio to fans via a video on their YouTube channel HERE. More news to be unveiled soon.

September 9 – Indianapolis, IN – The Vogue Theatre

October 26 –  Vancouver, BC –  The Commodore Ballroom

In 2019, an NPR story put a spotlight on “a band from Mongolia that blends the screaming guitars of heavy metal and traditional Mongolian guttural singing,” accurately highlighting the cultural importance and unique musical identity of The HU. Founded in 2016 in Ulaanbaatar, Mongolia, The HU, comprised of producer Dashka along with members Gala, Jaya, Temka, and Enkush, are a modern rock group rooted in the tradition of their homeland. The band’s name translates to the Mongolian root word for human being, and their unique approach blends instruments like the Morin Khuur (horsehead fiddle), Tovshuur (Mongolian guitar), Tumur Khuur (jaw harp) and throat singing with contemporary sounds, creating a unique sonic profile that they call “Hunnu Rock.”

Their debut album, 2019 ‘s The Gereg, debuted at #1 on the World Album and Top New Artist Charts. With it, the band have accumulated over 250 million combined streams and video views to date and have received critical acclaim from the likes of Billboard, NPR, GQ, The Guardian, The Independent, Revolver, and even Sir Elton John himself.

Proving their global appeal, The HU have sold out venues across the world in North America, Europe, Asia, and Australia, with scheduled festival appearances at Coachella, Lollapalooza, Download Festival, and more, creating a community of fans from all walks of life. They’ve quickly grabbed the attention of the industry, leading to collaborations with Jacoby Shaddix of Papa Roach and Lzzy Hale of Halestorm. And most recently, the band received praise from fans and critics for their Mongolian rendition of Metallica’s “Sad But True,” which Metallica themselves acknowledged on their social media accounts, seemingly giving the band their official seal of approval. The band has also explored eclectic ways to reach audiences with their sound, most notably writing and recording music for EA Games’ Star Wars Jedi: Fallen Order.

Readying their next chapter as a global force, The HU are finishing their highly anticipated sophomore album, which was recorded in their homeland during quarantine. The project is expected to be released in early 2022. But first, the band will play a slate of tour and festival dates this fall in North America, where they’ll be offering fans a “first listen” to songs from the forthcoming album, making a return to the stage where their connection with live audiences will reignite, once again proving that power of music transcends language and culture.

Connect with The HU