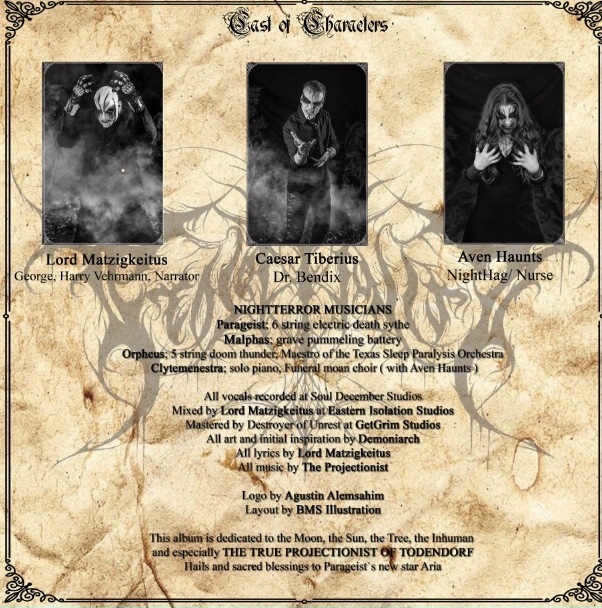 Formed in 2015 and already sitting on two bold black metal releases, The Projectionist, fronted by Lord Matzigkeitus, have returned with the first part of their far-reaching concept. Rather than a track by track storyline, the album presents itself in 5 acts, like a Shakespearean play.

Despite being a black metal album, the Shakespearean comparison isn’t as far-fetched as you may think, with the story centring on a protagonist haunted by sleep paralysis so severe his limbs must be amputated, before the NightHag possesses him and attempts to destroy everything he holds dear. Sounds interesting. Then, of course, you remember the story is to be told through the medium of completely indecipherable black metal screams, a technique Shakespeare rarely employed.

The slow opening to Act 1 is complemented by gentle piano melodies and a rhythm section that seems controlled and tight. Even the vocals, as grating as they are, start off pretty interestingly. That is, before the dull, low vocals of some sort of indistinguishable character enter and turn the piece into a joke. To the point where I actually laughed. The lion-like roars that fill most of the rest of the piece switch between being way too high in the mix and way too low, the droning guitars tend to find something they like and stay there for 5 minutes, while the intermittent interjections from other ‘characters’ bring back the unintentional comedy element and remove any attempt the band makes to tell a genuine story.

The next 4 acts, including the 4th, catchily subtitled ‘What Can Be Mollified In A Banshee’s Thrashing’, deliver much of the same. Admittedly, this 4th act is an improvement, delivering more variety and interest, with one haunting section allowing the drums to drop out and a guest appearance from what seems to be Gollum from Lord Of The Rings to take centre stage, providing the only understandable vocal performance of the album. But overall, it’s just not good.

Laden with (it’s black metal, so probably intentionally) poor production, vocals so abrasive they’d make Cannibal Corpse squirm and an underlying, accidental comedic tone, this strange, experimental venture is a misstep. Then again, it’s black metal, so as long as you can overlook the fact there are points that are literally just funny, then the dark, uneasy atmosphere created is actually quite impressive. 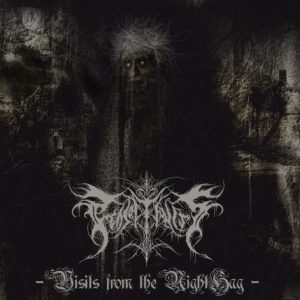