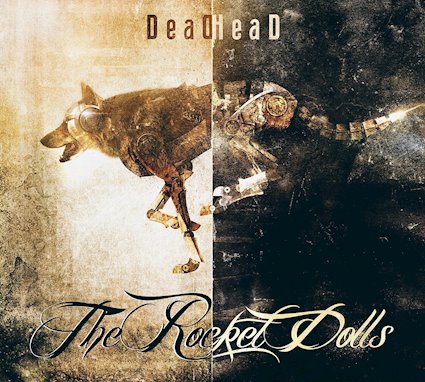 In the new video ‘DeaDHead’, The Rocket Dolls vocalist/guitarist Nikki Smash takes on the role of grim reaper to deliver a message of death courtesy of his bosses, played by band mates Benji Knopler (drums) and Joe Constable (bass). Eventually having enough of delivering punishment and the misery it inflicts, Nikki delivers a rose to the crime overlords and punishes them for using him to do their dirty work, giving them a taste of their own medicine!

Smash talks about the song,”‘DeaDhead’ is just simply about my battles with depression, battle with drugs and prescription painkillers. After a particular heavy day, I hadn’t a clue where on earth I was, I was actually in a flat downstairs from my own and I couldn’t for the life of me get back to my own. The day after, I realised something had to change. I couldn’t carry on being that reckless, and this song is very much me wearing my heart on my sleeve.”

Delivering 11 tracks of “angst and emotion that is palpable” (Planet Mosh), The Rocket Dolls have produced one of the most passionate and honest rock releases you’ll hear by a British band this year.

The new album ‘DeaDHead’ is out 6th April 2018 and is available to pre-order now.

W.A.S.P. – release another video clip for “Doctor Rockter” taken from “ReIdolized (The Soundtrack to the Crimson Idol)”!