November 4th will see the old friends play the Bowery Electric, with a book signing scheduled as well. Singer/guitarist Paul Richard, bass player Jack Steeples, drummer Dave Scott Schwartzman, and Let’s Barbeque / NY Thrash-era guitarist Jim Foster will be playing together for the first time in 39 years, with a special appearance from Cruising with Elvis in Bigfoot’s UFO bass player Keith Hartel joining in for some of the hits near the end of the set. Also on the bill is Drew Stone’s Incendiary Device and Fear Gods.

The next night, November 5th, the boys will make their triumphant return to the state that birthed them: New Jersey. Clifton’s Dingbatz will host the only New Jersey appearance of these hometown heroes, featuring the same original lineup and the same wacky hi-jinks. The Accelerators and Jack’s band Fear Gods are also on the bill. Books and special A.O.D merch will be available at both shows. Tickets are on sale now. 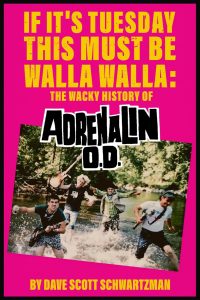 The events come just in time as Dave’s new book: If It’s Tuesday This Must Be Walla Walla: The Wacky History of Adrenalin O.D. gets a Halloween release date. Dave will also be signing copies of his book, pulling double duty on November 6th with an early event at Randy Now’s (of City Gardens fame) new Mancave in Hightstown, NJ. Following that, Dave (along with his pal and A.O.D. co-conspirator, Jack Steeples) will be in New Hope, PA, at the legendary John & Peter’s, with special performances by Philadelphia’s Flag of Democracy, Jack’s band Fear Gods, and Battalion Zoska.

Formed in New Jersey in 1981, Adrenalin O.D. paved their own path through the American hardcore punk scene of the ‘80s. They were one of the fastest and funniest bands of the genre, bringing a much needed sense of humor to a very serious and angst-filled era, inspiring the hardcore/punk generations that followed. Their songs dealt with the suburban experience while adding an injection of wise-ass sarcasm. As fast as their songs blazed, they somehow managed to still be melodic. Live, the band’s onstage chemistry turned shows into what has been called a cross between Minor Threat and Don Rickles.  The new book, titled If It’s Tuesday This Must Be Walla Walla, chronicles the hysterical history of A.O.D. from the inside view of the band’s drummer, co-founder, and youngest member. It’s a funny coming-of-age story told against the backdrop of the emerging American Hardcore scene of the 1980s.

About If It’s Tuesday This Must Be Walla Walla: The Wacky History of Adrenalin O.D.:

Part tour diary, part homage to an underground music scene that inspired him, Dave’s book is equal parts comedy and mayhem. 300-plus pages packed with tons of never-published photos, vintage flyers, a complete A.O.D. discography, and a story about heckling both The Clash and the cast of Happy Days.

A.O.D. was a staple for me. I had all their cassettes in regular rotation out on my half pipe. They played harder and faster, which made me skate the same. They were also a big inspiration musically – for one they taught me that aggressive music can still be irreverent and even funny at times. They always felt familiar even though I didn’t know them back then. Maybe it’s a Jersey thing.

In the late ‘80s we were listening to records in Ben Weasel’s room. He put on the record Humongousfungusamongus. After the first song I said, “Holy fudge!” I didn’t swear back then. “Who is this?” And he said, “Adrenalin O.D.” From that point on there was no turning back.

A.O.D. were always a favorite. We would go see them at places like CBGB and Get Hyped. They were very inspirational to both Anthrax and S.O.D. I love their music, their lyrics, and their whole vibe! The way “A.O.D. vs Godzilla” starts off… ‘til this day it makes me move. WHEW!

Adrenalin O.D. were the Circle Jerks of the East Coast, skewering the sheer dumbass-itude of what Trans-Am Joyzee thought was “normal” – and in way sharper ways than “Jersey Shore” could ever hope for. Admit it, City Gardens World, A.O.D. were the antidote for whatever you held dear; and you love ‘em for it to this day. – Jello Biafra