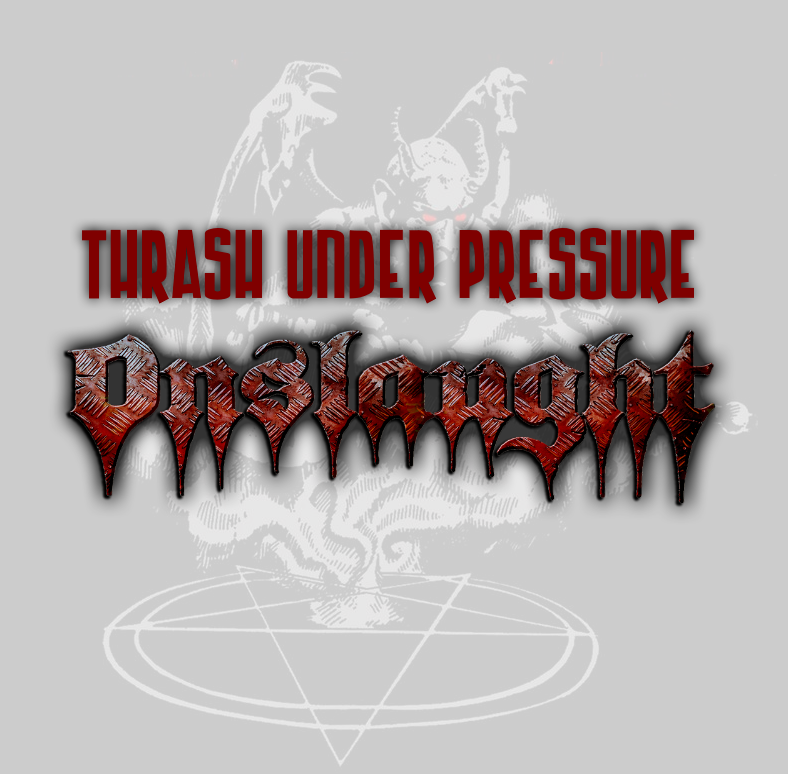 And so we come to the final – in no particular order – of the Big 4 of British Thrash. Onslaught were around before any of the other bands, or at least their recorded output stretches back the furthest.

The band formed in 1983 in Bristol and they had more of a British hardcore sound. When Power from Hell was released in 1985 they had begun to fuse this sound with thrash too. There are definite Discharge-sounding moments on this album, and let’s not pretend that that isn’t a fantastic thing. Two disclaimers though: the track Death Metal isn’t actual death metal and causes a reverse-Ronseal situation, and Angels of Death isn’t a misspelled Slayer cover, although it’s very bloody good.

The Force followed a year later. It’s not Star Wars-themed, but it does have a pentagram on the cover. Let There Be Death kicks things off and at this point it was safe to say that Onslaught had moved further away from hardcore/crossover territory and were now all about the thrash. This whole album has an early Exodus feel to it. Nothing to complain about there either. Thrash Till the Death closes proceedings with a blinding riff-fest and flies the flag high and proud for British thrash.

1989 saw the release of In Search of Sanity. Opening track, Asylum, is a little peculiar. It’s five minutes of bizarre sounds that could have been lifted from a horror movie and it leaves you wondering what the hell is going on. Luckily the title track kicks in right afterwards and it’s thrashtastic. The vocals are a lot more polished here than on their first two efforts – the band had the typical thrash band revolving door of membership and here they were already on their fifth vocalist. The melodic quality has hints of Joey Belladonna and yes, we could say that this is Onslaught‘s Spreading the Disease based on this. The guitar playing had improved too and there are some awesome solos on this album. Not to harp on about Anthrax, but Shell Shock doesn’t half sound like Madhouse in places. Onslaught might have been struggling to find a sound of their own, but they were definitely always making decent music.

There then came the customary hiatus. Sidestepping the bleak times of thrash altogether, Onslaught split in ’91 and didn’t resurface again until 2005.

A brand new album, Killing Peace, came along two years later. From the off it’s clear they aren’t messing about and they may well be heavier than they ever had been previously. Sy Keeler was back on vocals and there was no more vocal gymnastics and Dickinson-esque warbling. This is by far the best album they had produced up to this point and the only comparison I will draw here is they sound like Overkill, but way better. Shock ‘n’ Awe is both the album’s closing track and my reaction to their rebirth.

Sounds of Violence sounds like it could be an Exodus live album, but it’s actually a sign of Onslaught‘s, err, onslaught. This is a pant-soilingly heavy album and really isn’t for those of a nervous disposition. This is three quarters of an hour of how it should be done. It’s possibly one of the greatest thrash metal records of all time.

And then on to Onslaught‘s sixth album, VI. By 2013 thrash was enjoying a resurgence and Onslaught definitely played their part in this. VI might not be as heavy as Sounds of Violence but it’s still really, really bloody good. 66 Fucking 6 is possibly the metallest song title ever too.

The career of Onslaught is a game of two halves and the latter part is by far the best, but let’s not forget that their first pop at it laid some very important foundations too.

A seventh album is reportedly in the pipeline. Can’t wait.

Put them on your playlist: Fight with the Beast, Burn, Born for War