THY ART IS MURDER Announce one extra UK date after their performance at Download Festival!

Extreme Aussie death-metallers THY ART IS MURDER will play The Astor Theatre in Deal,Kent on Monday June 16th, following their much-anticipated Download Festival debut..The Sydney based bro’s have gone from strength to strength since releasing their Nuclear Blast debut, ‘Hate’ in early 2013. The album created waves across all corners of the globe, and after completing over 270 shows in 2013, and a mind blowing UK Tour earlier this year, the band are heading back to our shores once more to showcase their Hatred for the first time to the Download audience. 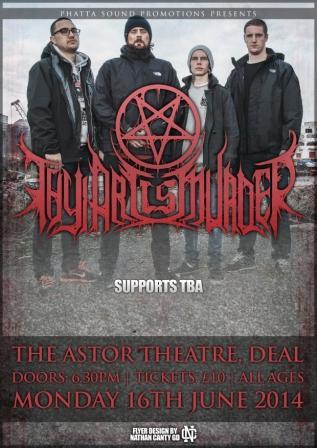 This is a hugely intimate show, and tickets are selling fast – so grab them now before they leave us again for a huge summer tour of mainland Europe and the States! And make sure you are at the Pepsi Max Stage on Sunday 15th June at 1.15PM for THY ART IS MURDER‘s Download debut… bring your lifejackets and seatbelts!

CategoryNews
Tags2014 Download One Extra Date Thy Art is Murder

ANATHEMA LAUNCH CLIP FROM ‘THE MAKING OF DISTANT SATELLITES’ DVD