Tony Foresta has been schooling thrashers in the art of partying for the last two decades. As frontman of both Municipal Waste and Iron Reagan he has certainly kept himself active with constant tours and new music flowing. We caught up with him for a different kind of interview in his downtime to talk about his beloved pups.

Tony! So you are a dog dad, tell me all about them! 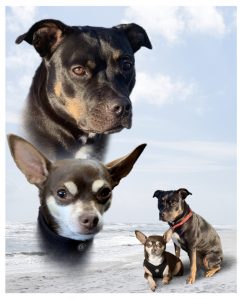 We have 2 pups. We have a Rottweiler pit bull mix. Her name is Sade. We also have a small chihuahua named Smelly. I’ve had Sade since she was a tiny baby and Smelly around 2 years. Both are rescue pups. I got Sade from The Richmond RAC which is a great spot right across from the Municipal Waste practice space in Richmond. I use to sneak in there by myself and look at dogs after practice all the time. Finally one day a lady ran out from the back and said “follow me, we have your dog” haha. She handed me a baby Sade and that was it for me.

We dress them up for football games almost every week. That’s not really not really weird to us haha. One time we laid a bunch of records out on the floor and had the chihuahua pic what we were going to listen to next. She picked Carcass. She’s a good girl.

Yes! Carcass! Good girl indeed. Can they do any tricks?

They both can shake with each paw. Like right and left simultaneously. That’s about it haha. 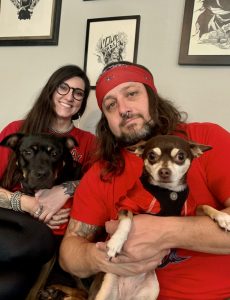 This last year has been pretty manic, so you’ve no-doubt, like the rest of us, spent a lot of time at home. How have your dogs helped being at home for you? Have they been comforting, or have they just been driving you nuts?

I think Sade is the happiest she’s ever been. She would get high anxiety when she would see me pack for a tour. I hated it.

I’ve never had a feeling like that leaving. It was a bummer but we both got used to it. Now she’s as happy as a clam because her pet human is here all the time. We also relocated to Florida a few months before the pandemic so my time off from touring has been extended a bit longer than most.

It’s been weird, but I love being around our little family.

I’ve been a dog lover forever but could never get one because I’ve been touring constantly for 20 years straight. Being gone for more than 8 months a year was brutal and I just couldn’t commit to it a pet then. I had to get Sade though. I fell in love with her the second I saw her. 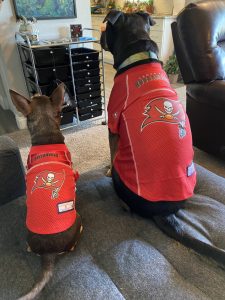 I had to drastically adjust my life style and slowly get my shit together to dial back the overworking. But when I did, it was a true blessing all around.

I love that, it must have been so nice be at home with them.

So you dress them for the football, which is awesome, do you put them intone other costumes? Don’t be shy to tell us about their battle vests.

Yes. Our dogs dress up a lot! Smelly has a battle vest. It was a hand me down from when Sade was a puppy. It has a cool back patch that says “Sink Pisser”. She looks tough as hell in it.

Okay, so if you could would you opt to have a dinosaur sized dog, would you?

No way. A dinosaur sized dog would be way too much poop. Sometimes Sade makes dinosaur sizes poops. They are no fun to pick up I tell ya.

If you could compare your pet to any famous musician, who would it be? 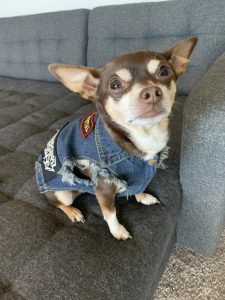 She prances around the house when we play it.  It’s weird and cute.

So cute! Do they like it when you practise at home, do you think your dogs are thrash fans?

We live in an apartment now so there’s no practicing here. Sade doesn’t like it when I yell. I recorded some Waste demo vocals at my old house and Sade hated it! She ran upstairs and hid in our room. She thought I was mad about something. I was just singing about partying. 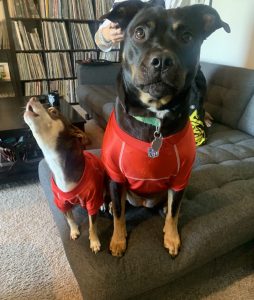 Speaking of music, how is yours going? Although it’s sad that no tours can really be planned right now, is there anything new in the world of Municipal Waste and Iron Reagan? Do you feel like you’ve used this ‘down time’ time as productively as you could?

We were actually able to finish a new Waste album which turned out to be a huge undertaking due to my move to Florida and the pandemic. It came out fucking awesome though and I can’t wait for people to hear it. One of our best endeavours yet. 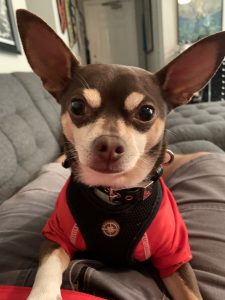 Thanks for all the love and please check in on your friends. Pet those pups!!!