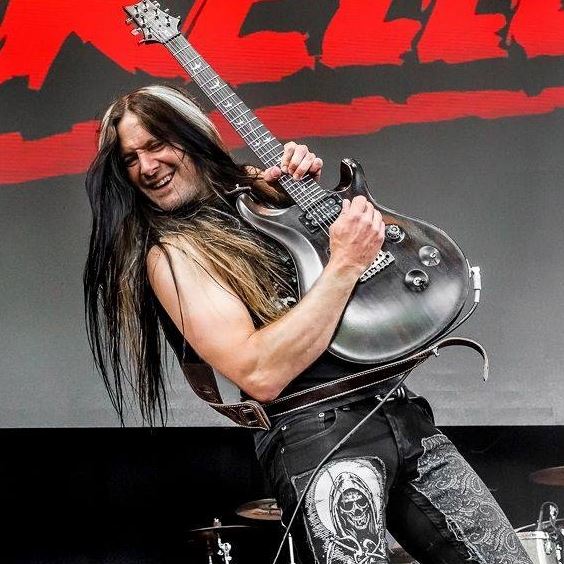 Tyketto Lead Guitarist Chris Green And Life With A Mog

Chris Green is a modern virtuoso guitarists guitarist. He’s had his talents showcased on albums by Furyon, Tyketto, Pride, Rubicon Cross and his own solo E.P Unveil. Chris has gone from being a guitar shred master, to being a cats shredding toy. 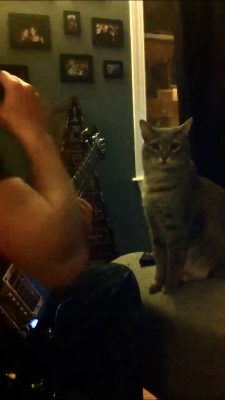 We sat down with Chris to explain.
Right now I only have one cat, his name is Minko, and I absolutely believe that he is plotting my downfall every waking minute. We have a love hate relationship and we’ll get into that a little later. Let’s just say he’d make a perfect Bond villain.

What is the weirdest thing Minko has done?

The weirdest thing Minko has done is learn to mimic my son Sullivan’s voice. It’s hard to explain, but he does this howl that at a distance sounds like Sullivan shouting for help. Genius, and fucking annoying at the same time.

He’s too thick for tricks, the closest thing to a trick he can do is manage to piss in his litter box but refuse to shit in it. That movement is reserved for the floor right next to the litter box. Oh, and I suppose a great trick is that when he’s about to throw up he’s able to hold it in just in time to reach the expensive rug. That’s pretty impressive.

How has Minko helped being at home for you during the Covid pandemic? Has he been comforting, or just driven you nuts?

Let me be brutally honest here. My cat’s average day is made up of begging for food even when he already has food. Eating until he wants to be sick, picks a crafty spot to hurl on and then maybe uses the bathroom. After having a shit on the floor his post movement ritual is to howl extremely loudly until someone acknowledges his presence, and then he turns the howl into a meow. If people around the house are in different rooms, he’ll howl

until we’re all in sight. Every time someone goes to the kitchen he begs until someone caves in and gives him a cat nip treat (he’s fully addicted and despi

te repeated efforts to get him into rehab he refuses to go), I fully endorse that he is Keith Richards spirit animal.

Minko will not sleep, if he does, I never see it. Imagine your average cat that naps all day, comes for a cuddle every now and again, makes you feel loved, meows in a cute way, Minko is NOT that cat. He’s Lucifer in cat form.

Once he threw up outside my bedroom door just next to the top of the stairs, the Fedex guy rang the doorbell, I ran out the bedroom to catch him, slipped in the puke, fell down the stairs and scraped my left nipple open trying to regain my balance. I have a scar, this I will not forgive, it was deliberate and malicious. Oh, he also threw up outside the bathroom while my wife was using it, she slipped over in that upon exiting the WC and banged her knee up. If you want to hear more stories like this please go to my blog “101 ways to skin a cat”.

You’re all not gonna believe this, but I LOVE animals. I really do, it’s only this one that I’ve had to go to war with. Let’s try and count the animals I’ve had.

6 Goats (they’re my favourite animal in the world, I speak fluent goat)

1 absolute fucking twat that makes my life a living hell

No, but if I find a straightjacket with a ball gag cat costume I will buy it immediately. 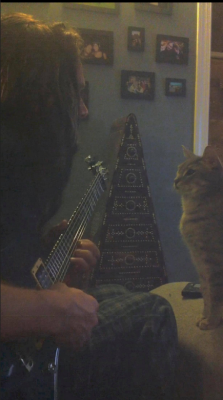 Does Minko like it when you practise at home?

I bet if my cat could talk he’d tell me some shit like “I really like Coldplay, I also think U2 are fabulous”, or he’d tell me how much he loves my wife’s punk music. Because the fucker is deaf now he goes on rumbles and vibrations that he feels, so I just dial up the bass on my amp and he stays the fuck away from me, my studio is littered with Persian rugs, he’d have a field day hurling in that room.

My wife loves this cat more than me I think, he was around before we even met, so he walks around with this air of superiority like I’m playing second fiddle to him. I can see it in his eyes when she’s not looking, like a resting bitch face staring at me while she’s cuddling him. Pure evil. If we’re all away we have a cat sitter, I still smile every time I picture her having to deal with him.

All things music have pretty much been put on hold in my life, I am writing riffs here and there but I’m trying to just get my head around this whole pandemic and work out how to diversify. Every guitarist out there is doing online shows and teaching so it’s a lot of noise to get through.

Maybe I’ll finally become ballerina, it’s always been a dream of mine, that or a cobbler.

Yes, thank you for your support, please go and buy my instrumental EP UNVEIL on iTunes or any other digital outlet, that way I can afford to have Minko put in a rehabilitation centre for extremely naughty cats, and maybe we’ll finally forgive each other and be friends again.

As ever Chris, this has been incredibly fun to do.

To keep an eye on Chris Green , his talent and to purchase Unveil, click HERE