Just before Vintage Trouble took the stage in Glasgow, AATR managed to interrupt them to grab a very quick interview with them.

Hi fellas & thanks for granting this interview.. I know you’re itching to get on the stage.

Ty – We met each other during a late night jam session in Laurel Canyon & we just started playing together. The band thing never really came up. We played a show within 3 weeks of meeting & it just continued from there.

It wasn’t long after that that you came to the UK & played Later with Jools Holland TV show. What made you decide to jump over seas so quickly instead of building a fan base in the states first?

Ty – We’d been watching a documentary on 1967 Stax records when they decided to bring all their acts from the States to the UK & we thought that would be a good idea for us. So we came over & played the Jools Holland show & that’s pretty much all she wrote.

That Jools Holland show just catapulted you into the stratosphere career wise.

Ty – Yeah it was obviously a slow news week (laughs) everyone seemed to be watching that show.  We’d never done a TV show before & it seemed that what we were doing at the time was necessary & we just didn’t know it. We went out to our bus to leave the studio & we suddenly became the 4th most thing to be tweeted about in the world.

I don’t think people realize just how big the Jools Holland show is, that you can do a TV show with that many people watching & become the 4th most tweeted in the world.

Rich  – It’s also worth noting that we were only supposed to be in the UK for a couple of days & we ended up staying a month. We went from playing dumpy little clubs to playing with Brian May & Bon Jovi all on the back of that show.  We ended up doing 80 shows in 100 days which ended up as a documentary that we did & that run actually ended in Glasgow (where we are now). It’s a full double disc set, the 2nd disc is the full Glasgow concert.

We were booked to play the little room at the O2 & a guy tapped us up to do a 3 camera shoot in the small room. At that point that show was already sold out so they bumped us up to the big room due to the demand for tickets. It was incredible. It was our first time in Glasgow & we had a sold out show in that big room & fortunately it was captured on film to celebrate the end of the 80 shows in 100 days run. It was amazing. Everyone knew our lyrics. Really outstanding night.

Ty – The Jools show seemed to let people know what we were like on a TV show. Especially as it was the first thing that showed up when you Googled us as that path then led us to all the TV shows.

Yes we have good management, agents & we’re doing good stuff, but we had the best business card & that was Jools Holland. It was a crazy time as we didn’t even have songs on the radio at that time which would justify why we would be on all these TV shows.

All – THANK YOU JOOLS

Speaking of great management, you have Doc McGee who’s probably best known as being Motley Crues management as well as Kiss. How did that relationship come about as from an outside perspective it seems a little left field?

Rick – A good friend of Docs suggested that he come along & check us out at a place called The Tar Pit. Doc came down, saw us & within the first 30 seconds he knew he wanted to sign us.  We were in his office a couple of days later. We told him that we didn’t want to do anything inside of LA & we wanted to do the Stax thing. Doc agreed that it was a good idea & took us to the UK.  We did a few showcases & that’s basically how we ended up doing the show with Jools.

Rich – What a lot of people don’t know about Doc Mcgee either is that back in the day he was managing James Brown, Diana Ross etc. He comes from a long lineage of all different acts. He’s pretty clued in & he’s very different in the way he signs his bands also. Instead of watching the band, he’ll watch the audience. It’s all about connections for him. We’re very connected with our audience & with the Trouble Makers (fans) as well. Back then in LA  we had a very potent group of Trouble Makers who were with us & it was a party every time we played.

How did it feel to play for Paul Stanley at his birthday?

Ty – He wasn’t in his make-up so we didn’t really know whose birthday we were playing (laughs). Supposedly he never sings with anyone outside of Kiss & luckily of naievity at not understanding some of the rules at that time helped us out. We’re at his birthday dinner & I just walk over to him & say ‘I hear you do You Shook Me at soundcheck, Let’s do it tonight’ & he was like ‘OK’.

That must have been a bit of a pat on the back for you to get Paul Stanley to get up & sing with you?

Ty – We have the same management & we had met him before, it’s not like we were just at his birthday party. We did have an existing relationship with him. What surprised me was that he was out of control. I’d only ever heard him sing with Kiss & that guy can wail.

Rick –  We were also on the front row of Gene Simmons wedding & as Ty said, we didn’t kinda know the rules then.

Rich – We also opened for Kiss in New Orleans. As well as performed a half time football show with them too.

Ty – I took my dick out in front of him once.

Rick –  (Laughing) It was painted white with a black star on the end of it.

That’s one hell of an homage (laughing)

Rich – We have become great friends with those guys & when we play LA the whole band will come down & watch us play. They don’t HAVE to do that. They doit because they like to. We’ve come to really like those guys & they’ve come to like us. It’s become a real nice friendship.

You’ve opened for The Who, Dave Matthews, appeared on the tonight show 4 times as well as supporting Paloma Faith on her arena tour, are you still getting starstruck?

Rick – I like the starstruck idea. I was & still am a massive Prince fan & I had the great fortune of meeting him & I was unable to talk. There’s something beautiful about being confident but still slipping into the starstruck element when you do meet your idols & it’s all still really exciting. Even if we keep coming around & meeting the same people, it’s still exciting. We played with Lenny Kravitz & that was really cool. That guy has some kinda aura about him but at the same time you’re still “It’s LENNY KRAVITZ!” ya know. Especially as a fan of the albums. Even tho he knows us by name its re-affirming but at the same time you feel very lucky to be thrust into some of the situations that we have been thrust into.

Rich – We’re still fans. We got to play with AC/DC in Melbourne & those guys came backstage & met us & that was really cool it was a major show, not just for us but for them also so for us to hang out with them was a big deal for us. We spent almost a whole year with them after that & again we’ve become good friends. It’s still unbelievable to us.

I was backstage & my band was opening for her band at the time & there were these tights hanging over the rail. There were these fish net stocking & a nude pair that said Tina on them & I smelt them. They smelled of eucalyptus & as I smelled them she walked up to me with her hand outstretched & said “Hi I’m Tina”.

After I get over the initial shock she started talking to me & I think I became the person she spoke to most on that tour.  Embarrassment seems to be a good way into human interaction. I think after that point I wasn’t the guy who was opening for her, I was the stupid guy who got busted sniffing her tights. So I was starstruck for a couple of seconds.

Guys, I know you have to run to make the stage. Thank you so much for taking the time out. It’s been an absolute blast. Have a good one. 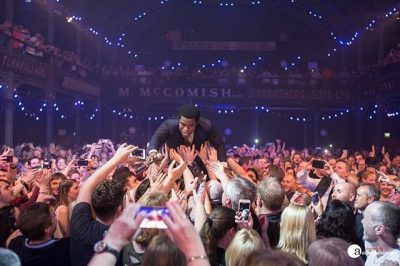