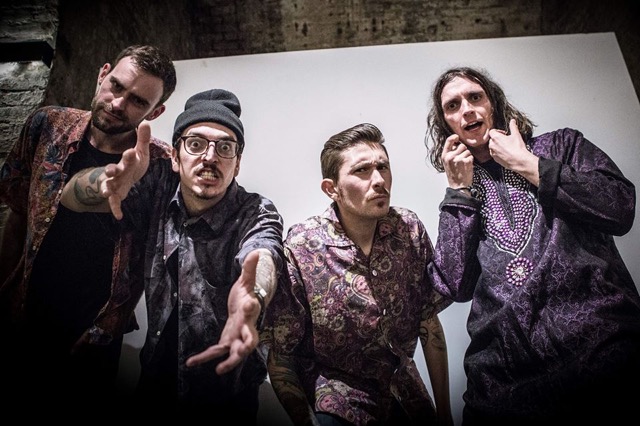 15th November 2018 0 By John Deaux
WACO are breath of fresh cosmic air, four ambitious, creative and wonderfully weird friends that don’t do things by halves. Whether it’s fighting off hypothermia in an icy woodland lake in mid-December for that ‘perfect shot’,  gallivanting around a desert dressed as cosmic nomads, or preaching a warped gospel in central London in what became a peculiar performance art piece, they have always done things in their own weird way and this what is so utterly likeable about them.
Here is what Jak has to say about the single: The Jersey Devil is an ode to love, hate and everything in between. Our emotions are mysterious and misunderstood, but, ultimately, they make us human. The one-shot video was filmed at one of our debaucherous parties in London. As you can see, emotions were running high.
WACO have been preaching their gospel of optimism and love across the UK and Europe alongside the likes of Slaves, Juliette Lewis & The Licks and Anti-Flag. Their upcoming debut album Human Magic will be released early 2019 on Standby Records.
You can see WACO working their magic on stage this month on Friday 23rd November at Scream Lounge London.
WACO are:  Jak (Lead vocals, guitar), Tom (Guitar, Vox), Chris (Bass, Vox) and Welshy (drums, Vox)