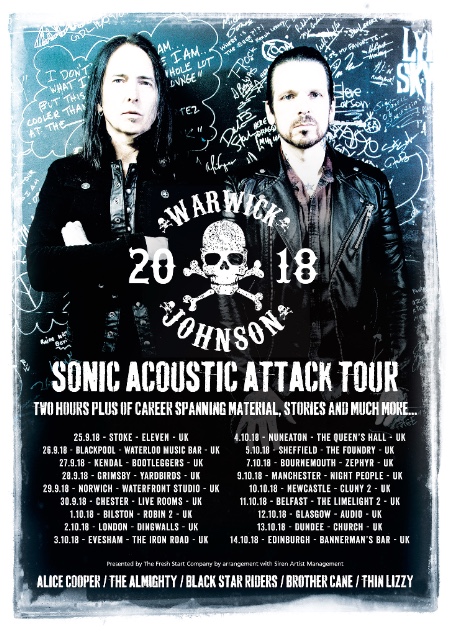 Rock veterans Ricky Warwick and Damon Johnson are pleased to announce a ”Sonic Acoustic Attack Tour” in Autumn 2018. Warwick and Johnson will team up again to deliver a series of intimate acoustic and spoken word shows across the UK and Europe. With over two hours of performance, the evenings will be featuring career-spanning classics from Thin Lizzy, The Almighty, Black Star Riders, Alice Cooper, Brother Cane, alongside anecdotes and stories taken from the artists’ life on the road.

Both Warwick and Johnson are members of the critically acclaimed Black Star Riders. The band’s latest album “Heavy Fire” gained worldwide success reaching: #1 in the UK Rock and Indie charts, #3 in the UK Vinyl chart, #6 UK in the National chart, #11 in the German National chart, #6 in the USA Hard Rock chart, #22 USA Independent chart and #25 in the Rock chart.

Ricky Warwick is one of the UK’s most iconic rock front-men. Starting his professional music journey in The Almighty, with whom he released 7 albums in the 90’s, Ricky went on to record several solo albums before becoming the vocalist with Thin Lizzy and now with Black Star Riders.

About the tour, Ricky says: “Two hours plus of acoustic carnage and mayhem with brother Johnson? Who’d have thought bits of wood with wires could be so sonically invigorating??? … Well you’re about to find out!!!”

American guitarist, vocalist and songwriter, Damon Johnson, began his career in the 90’s, when he co-founded Brother Cane. Johnson went on to collaborate with the likes of Stevie Nicks, Ted Nugent and Queensrÿche, before joining Alice Cooper’s band as lead guitarist. Since 2011, Damon is lead guitarist with Thin Lizzy and Black Star Riders.

When referring to the shows, Damon says: “Ricky has inspired my musical efforts in so many ways and we have become best mates. These Warwick Johnson performances always showcase our respect for each other and our love of music. And it’s a great night out!”

“Sonic Acoustic Attack Tour” will start in Sweden in early September and will continue across Europe and the UK until mid October. Full dates are as follows. 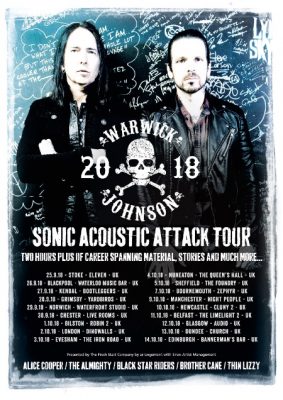 HRH ROADTRIP CELEBRATES ITS 10TH ANNIVERSARY WITH ITS BIGGEST LINE-UP TO DATE!