WHISKEY MYERS, the East Texas group whose music blurs boundaries and straddles a host of musical worlds, have announced their forthcoming fifth studio album, with this self-produced, self-titled outing set for release on September 27th via Snakefarm Records in the UK. It will be available on CD, digital & double vinyl.

“This was the first album we’ve produced on our own and it’s 100% authentically us, which is why we decided to self-title it WHISKEY MYERS,” says lead guitarist John Jeffers. “We’ve been fortunate in our careers to work with some incredible producers, but self-producing gave us the freedom to try out every crazy idea in the studio, which got us to this place where we are completely satisfied with the end result and more excited than ever to get this new music out to our fans.”

The first taste of new music comes via instant grat track ‘Die Rockin’’, a hard-hitting anthem that drives home the band’s passion for music, and is sure to be a hit at their increasingly sold-out live shows, including Tuesday, June 25th when they open for rock icons The Rolling Stones at Chicago’s Soldier Field in the US – a band that is namechecked in the song’s lyrics.

“I wrote ‘Die Rockin’’ with the legendary Ray Wylie Hubbard, and it really sums up this rock ‘n’ roll life of ours,” explains frontman Cody Cannon (who also wrote with Brent Cobb for the track ‘Running’). “We’re consumed by music and are such fans of the legends that came before us. We’re out there on the road and in the studio trying to pay homage to those greats that have inspired this generation while we strive to create some magic of our own.”

The album as a whole stretches the boundaries of genre just as the band themselves have done over the past 12 years, drawing as much inspiration from Nirvana as from Waylon Jennings – even adding the legendary McCrary Sisters’ gospel influence on background vocals. WHISKEY MYERS follows the band’s most recent record, Mud, which climbed to No. 4 on Billboard’s US Country chart in 2016, before the group was featured in Paramount Network’s Kevin Costner hit series ‘Yellowstone’ in 2018, which propelled their entire catalogue into the Top 10 of the US iTunes Country chart. The band will again appear in Season 2 of ‘Yellowstone’ with synced tracks throughout the season, including the season premiere on Wednesday, June 19th.

In the UK, Whiskey Myers have seen their star very much on the rise, playing sold-out tours and appearing on a number of festivals, including a main-stage appearance at the prestigious Download event (2018). 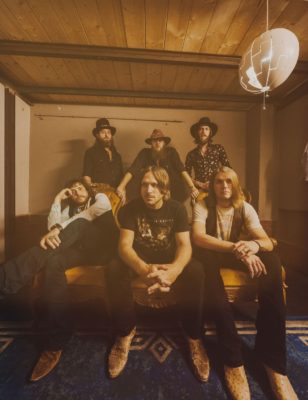 About Whiskey Myers:
Genre-bending band Whiskey Myers have played more than 2,000 live shows since their emergence in 2008, and have sold out 95% of their headlining dates over the past two years to ever-increasing crowds. New album WHISKEY MYERS is due out September 27th and follows their most recent album, Mud, which reached No. 1 on the iTunes country chart in the US, with emotive single ‘Stone’ hitting Top 10 all-genre. USA Today describes the band led by frontman Cody Cannon as “a riff-heavy blend of Southern rock and gritty country that has earned comparisons to the Allman Brothers Band and Led Zeppelin,” with Rolling Stone noting “it’s the seminal combination of twang and crunchy rock ‘n’ roll guitars that hits a perfect sweet spot”. The band has also earned sync success with features in Seasons 1 & 2 of Paramount Network’s Kevin Costner hit show ‘Yellowstone’ as well as the Renée Zellweger-led Netflix series ‘What/If’. As Esquire proclaims, “Whiskey Myers are the real damn deal”.