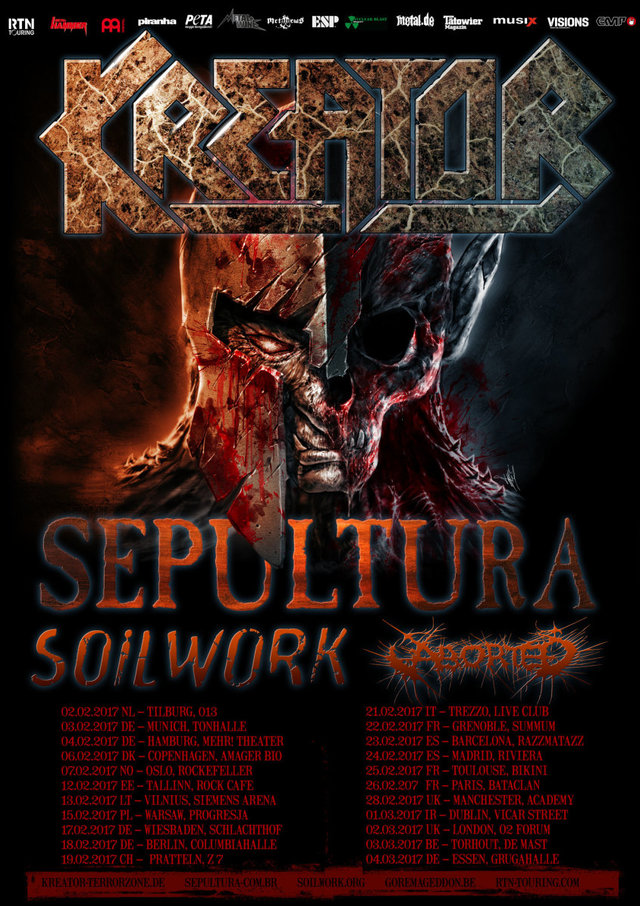 As we arrive at Manchester Academy for the unusually early start time at ten past six in the evening you could feel the excitement in the air for what is set to be an extraordinary gig featuring four big names in metal. After spending for what seemed like forever looking at the vast amount of merch I finally purchased my ‘Gods of Violence’ tour shirt and we made our way to the sound and lighting engineers area ready for the show to commence.

We didn’t have to wait long until Belgian Death Metallers Aborted [8] came onto the stage and immediately kicked off the show with Divine Impediment which is from their current album ‘Retrogore‘ – the crowd loved it as they also did for the remaining 7 songs.

It was unfortunate that Aborted was only allocated 30 minutes but frontman Sven de Caluwé did a superb job of warming the crowd up and the rest of Aborted didn’t miss a beat. They may have only had 30 minutes but fucking hell what a 30-minute onslaught that was!

Arriving on stage a little later than scheduled (due to the overrun of removing Aborted‘s equipment from the stage and etc) was the mighty Swedish Soilwork  [9] who decided they would pummel us for the next 45 minutes.

Although not as brutal as Aborted, Soilwork delivered us some heavy and melodic awesomeness from their immense catalogue of studio albums starting out with the title track (and only track) from their latest album ‘The Ride Majestic‘ – I guess with the short stage time and fan favourite songs from your back catalogue it would have been difficult to include other tracks from the new album.

At the end of a great set Soilwork obviously finished off with Stabbing the Drama – Soilwork successfully picked up the momentum that Aborted created and the crowd was left buzzing but wanting more.

After a short wait, it was time for Brazilian legends Sepultura [5] to hit the stage. It was apparent from very early on that the fans weren’t really that interested in the newer stuff – yeah there was some cheers for the new stuff but nothing compared to their classic “Max era” songs.

For me and by the looks of other people around me, Sepultura‘s set wasn’t completely up to par. Fans liked singing along to the old songs don’t get me wrong but there was no life in the majority of the songs.

I think part of the problem is that Sepultura is missing a rhythm section. What I mean by this is when it came time for Andreas to do his solo’s you lost the sound of the song (where historically Max would continue with the rhythm of the song) and was just left with Andreas shredding away and drummer Eloy Casagrande pounding away.

Paulo‘s bass could have carried the song melody on just like Rex used to do in the Pantera days when Dimebag was performing the solo’s but we couldn’t hear his bass for the entire set except for a moment where all the music stopped for a brief 3-second bass section.

It was very much just “Metal by numbers”. Sadly, I felt like I was watching a bad Sepultura cover band and was left feeling deflated. I wasn’t the only one either as there were comments of a similar nature all around me.

Now it was Kreator‘s [10] turn to come on stage. Opening tracks Hordes of Chaos and Phobia had the crowd going wild. Mille had the crowd in the palm of his hand, there was the crowd singing (very badly in my case) right from the start of the set, there were circle pits on demand, the were crowd surfers galore and there was an umbrella, yes, an umbrella. I forget the exact song but think it was during People of the Lie when someone in the pit put up a brolly and ran from one side of the Academy to the other time and time again until the handle had snapped so much it was impossible to keep upright – this entertained a few members of the crowd.

Now back to the gig, Kreator were simply on fire, song after song the crowd wanted more and more is what they got. A standout moment for me was Fallen Brother which was a great tribute to icons that had passed away with the video screens showing images of Lemmy, Dio, Phil Lynott, Jeff Hanneman and more – beer glasses were raised by the crowd as they paid their respects to those fallen icons.

Following the aforementioned goosebump moment of Fallen Brother Kreator resumed the onslaught with Enemy of God and then onto the equally excellent From Flood Into Fire – at this point the set was just over halfway through, Kreator were still cranking the aggression out at maximum and the audience were loving it.

Going towards the end of the set we were treated to Violent Revolution, Flag of Hate/Under the Guillotine and finally Pleasure to Kill. With such an amazing back catalogue Kreator could have kept going for at least another hour – they certainly looked like they could have given us another hour. Being masters of the stage they didn’t even look like they had broken into a sweat.

Once the set had finished I took a look at the Kreator merch stall and there must have been at least 30 people waiting to buy some merch, each person in the queue and leaving the building left with a massive grin on their faces. Kreator are simply one of, if not, THE best and most exciting metal bands on the scene today both in the studio and on stage.