Had Brooke Benton been in Scotland tonight, he would’ve been singing Rainy Night In Glasgow instead of Georgia. It was a poxy miserable day.

I wandered into the venue just after doors and was greeted by the sight of H standing behind the merch desk who was frantically trying to keep up with the demand of the onslaught of punters trying to purchase their wares. It’s been awhile since I saw a merch stand that busy.

The 2 support acts (Circle Of Tyrants from Glasgow and Disposable from Edinburgh) both did a fantastic job of getting the audience wound up and ready for Acid Reign, aswell as proving that thrash was alive and well North of England.

At 9:15pm the intro TAOE booms over Audios before Acid Reign hit the stage and kick off with The New Low from their latest album The Age Of Entitlement.

The set is absolutely littered with old favorites such as Goddess, Motherly Love, The Fear and Humanoia. The new tracks, Within The Woods, Ripped Apart, Hardship and #NewAgeNarcissist blend in ridiculously well into the set that makes it really hard to tell (without being told by H that is) what the old stuff is and what the new stuff is.

Marc Jacksons live thrash drum skills are second to none. An absolute beast behind the kit and the amount of energy he has makes Animal from the Muppets look like he’s on Quaaludes.

The twin guitars of Paul and Cooky rival Adrian Smith and Dave Murray of Iron Maiden with their twin lead trade offs and as for bassmeister general Pete Dee, it’s not often that you’ll witness a bass player not only break a string but also finish the song with just 3 and not bat an eyelid.

But of course it’s H who steals the show (and quite rightly so). He’s like Hong Kong Phooey. Before the show, he’s a mild mannered soft spoken genetleman Howard Smith, BUT as soon as it’s time for him to hit that stage with his band, it’s like he’s possessed by the spirit of Iggy Pop.

Bouncing from one side of the stage to the other. Trying hard not to collide with  Pete, Cooky and Paul before stage diving into the audience.

I was fortunate enough to see AR back in the day several times (& even their last gig at the Marquee in London back in 1990) and H was a fucking lunatic on stage then. 30 years on and he’s even worse. Not content from diving from the stage but also off the bar and even a LADDER (it wasn’t his real ladder. It was his STEP LADDER).

I’m only a couple of years younger than this guy and it takes me all my energy in the mornings just to get out of bed. I was fookin knackered just watching this mad bastard.

H still has that same set of amazing pipes on him and sounds better than ever.

This was the first time I had seen Acid Reign since their “last show” in London 30 years ago and tonight it was like seeing them for the first time. I had a shit eating grin on my face from start to finish. In fact I’m still grinning like a Cheshire Cat writing this review.

This was a proper old school UK thrash gig before health and safety went nuts and stopped fans from stage diving. There were times that there were more divers on stage than the band and it was ace.

Fuck me, what a gig. I can see why Glasgow Audio has become Acid Reigns new Scottish home. The audience were ravenous for this band and the energies from both sides was flowing in perfect harmony.

Glasgow, you truly are a beautiful bunch of nutbags.

if you get a chance. Go see AR in a town near you very soon. You’ll have very wet pants if you do. 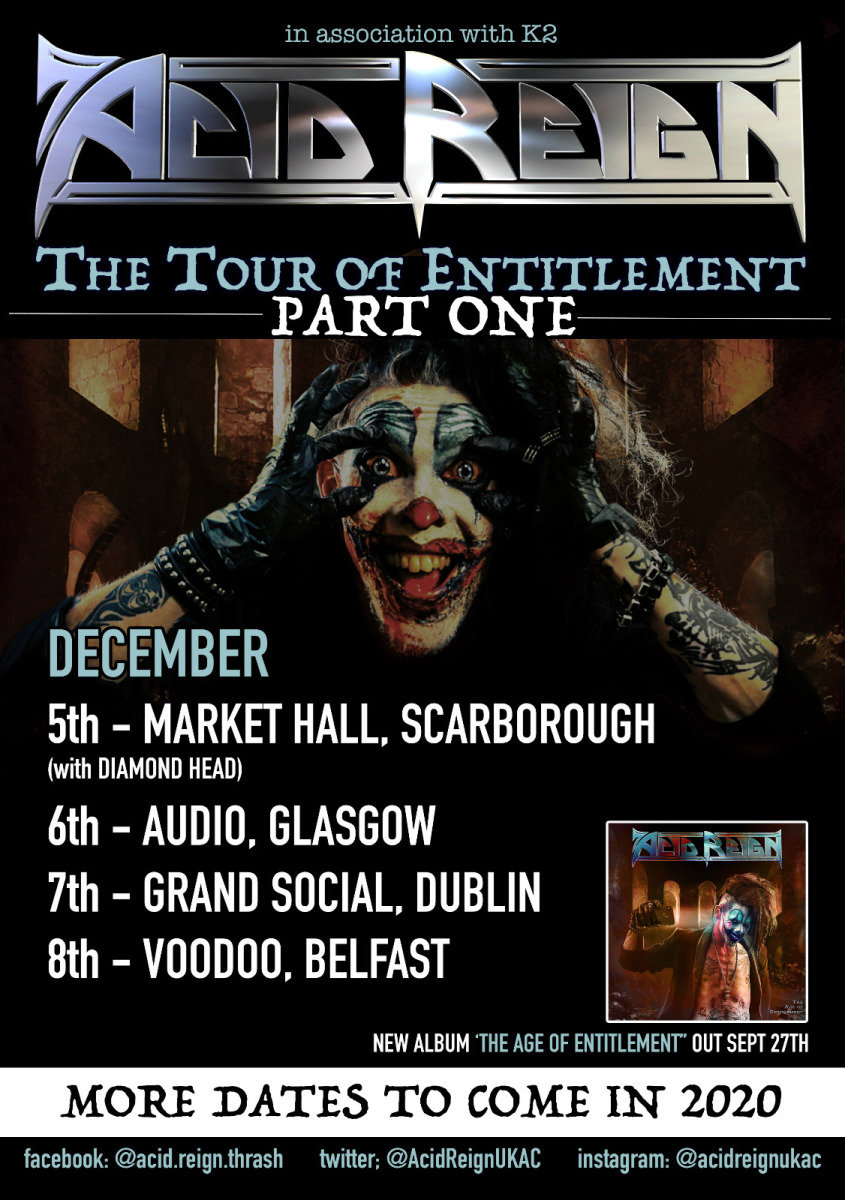