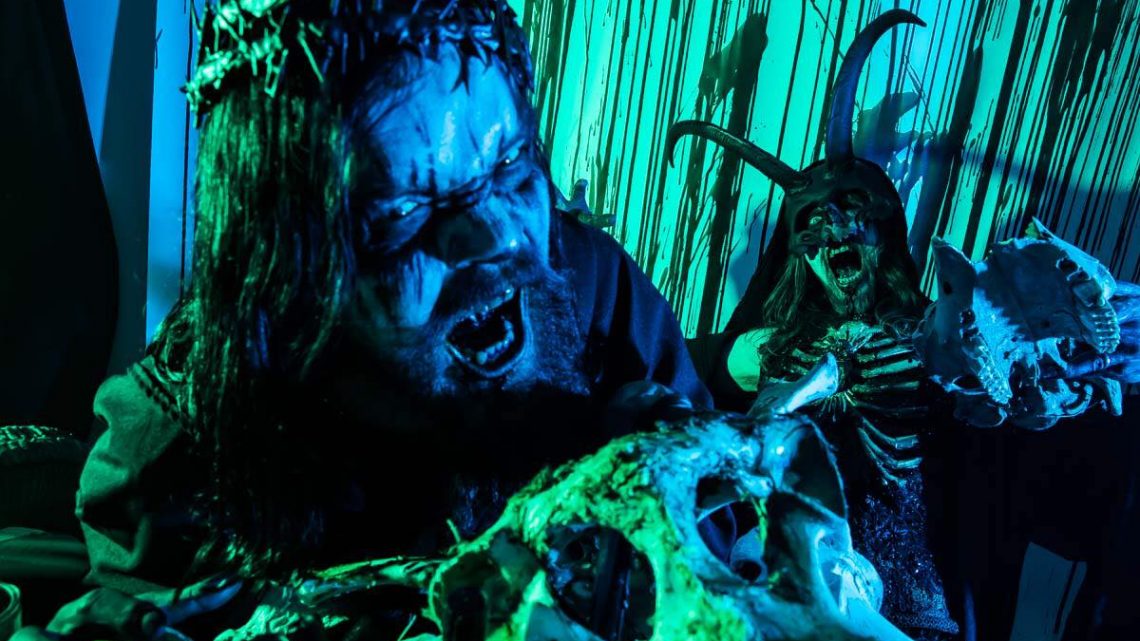 Norwegian Musician Anders Odden has etched his work into the very core of the International Extreme Metal community, leaving lasting impressions since the 80’s and he hasn’t stopped there. He is the Co-founder of Death Metal band Cadaver and together with Dirk Verbeuren (Megadeth) on drums, in 2020, they bought out the bands long awaited new Album Edder & Bile. Anders is a productive soul, he has also founded Industrial Rock band Magenta as well as some Old School Black Metal with Order, while also playing bass in Norwegian Titan’s Satyricon. As well as having a constant supply of projects flowing his way, (including his own post-1st lockdown outdoor festival) he has done notable work mentoring emerging musicians in the Norwegian music industry.

I caught up with him for a cheeky video call from his cabin studio in the Norwegian countryside for a chat about his pup. 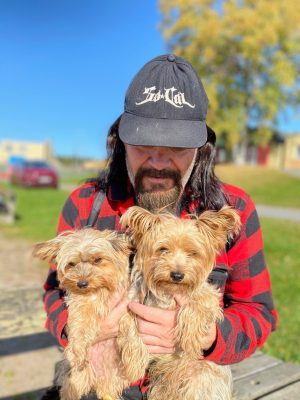 Anders with Alvin on his left and Alvin’s potential girlfriend on his right.

Hey Anders, so, you have a fluffy friend in your life? Tell us all about him?

rescue as well, his name was Charlie and he was crazy. He used to bark constantly towards anything, he had a lot of trust issues and we unfortunately lost him in May 2020. We were a bit lost after he died and we weren’t sure if we should get another pet or not, but I think it took less than three weeks and then my wife, Vilde found us another

rescue. We took him home and named him Alvin. He is so different to Charlie was, he just loves everybody and if you came to our apartment, he would immediately be all over you. He jumps on the couch, he literally falls onto his back asking you for belly rubs and cuddles. He is also very into men so he might be gay. I don’t know, maybe he is sexually confused, because he is in his prime and hasn’t really gotten laid yet. So he is constantly humping the air around him.

Poor Alvin, How old is he?

He is four years old, but he seriously has the memory of a gold fish. If you go out to take the trash or even just to the mailbox in the lobby, by the time you get back to the apartment 2 minutes later he will be like, “Wow! There you are! I haven’t seen you for such a long time!!!” He acts like you haven’t been home for a week, every time. He is just a very happy little fella.

What a Gem! What is the weirdest thing that Alvin does?

Well, it has to be trying to hump my Mum and my Dad I guess, that’s pretty embarrassing. I have a relative that has another female Yorkshire terrier and because we had a death in the family a few months ago, we met at the funeral and discussed the dogs meeting. We were hoping she would maybe become his girlfriend, but when they met, he was a lot more interested in her than she was in him. 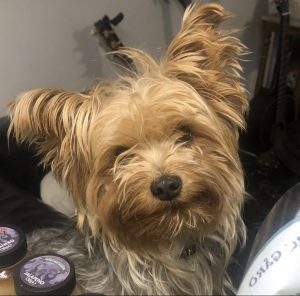 That might change, hopefully, because they both have ‘pure bred’ certificates, so we could potentially get puppies and share the profit of selling them.

That was actually my wife, Vilde’s ‘selling point’ when we got the first dog. That he would pay for all of our vacations. I was like, “Wow, really? He is gonna pay for all our vacations? That sounds interesting.” But, then we met Charlie and that was never going to happen. Imagine the dog being like “Oh man, I’m so busy, I’ve gotta go and fuck someone so my parents can go to Greece now!” (Anders cackles) It doesn’t sound right, it would be like I was pimping my dog out.

Well, let’s hope that Alvin gets a girlfriend so maybe one day you guys can go on a holiday again. Haha! So how has he helped being at home for you guys, when Norway was in lockdown?

Well Alvin is definitely part of the family now, he has been with us since the Summer and has made himself at home. Everybody that meets him loves him, so we feel that he is in a good place and he makes home nice and cosy. As for the lockdown here in Norway, it has been strict, but not as strict as I’ve seen in other countries.

We’ve done quite well so far, I mean all the bars have been closed here since the beginning of November and that feels a little weird now. 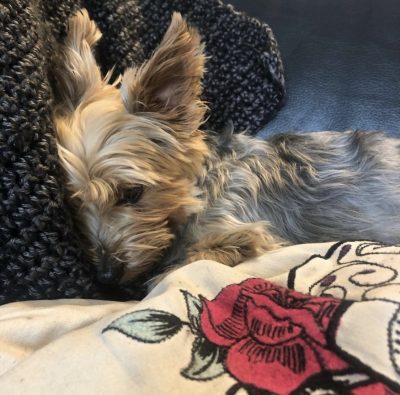 Alvin being all cuddly

It’s like being 15 again and not being able to go to any bars. In my neighbourhood, the only positives I can see is that restaurants now have the time to renovate or fix things in preparation to reopen again. There will also be a few that probably won’t open again. I’m sure you’ll be very surprised with the changes to Oslo when you can come back here again to visit.

I’m sure I’ll be very surprised when I do return. In Oslo, I always noticed that there are a lot of dogs, there are always people out walking their dogs, no matter the weather. Some I’ve seen in costumes too! Do you guys ever put Alvin into any costumes?

Well, only because it’s been so cold, we have a cute sweater we put on him, but no crazy costumes, we think he looks cute enough without them. He even has his own instagram page. (Follow Alvin Odden HERE)

Well I’ll have to make him a battle vest then while I’ve got the time!

Yes, you’ll have to get the measurements, because he is bigger than our old dog Charlie.

Okay, here is a question, if you could have a dinosaur sized pet or a pet sized dinosaur what would it be?

(Laughs) Well it would be very funny to have a dinosaur sized Alvin, with that attitude? A ten meter high love machine??? He would be humping trees and everything. 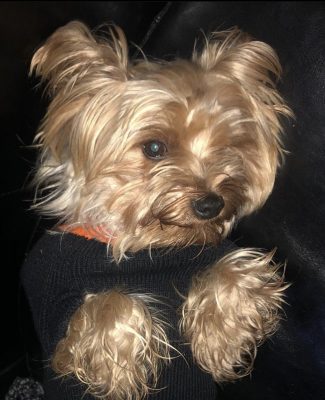 Alvin in his tiny sweater

It would be funny to see him that huge, I’m sure he would either use us as cuddling items or he would be hunting us. One funny thing about Yorkshire terriers is that they have been bred for hunting rodents. I took him here to the cabin and he heard mice in the walls. He was immediately on alert and even if you say the Norwegian word for mouse “Mus”, he will be at the ready like “WHERE?”

Well, maybe we can borrow him for the mouse problem in Edinburgh. Does he enjoy when you have him in the cabin/studio when you practice, do you think he is an Oldschool death metal fan?

Well, I actually don’t think he is fazed that much, by any of the music I play or listen to. I think that for dogs their way of hearing is focussed very different from us so they can hear frequency’s that we can’t hear. He doesn’t really care

what I’m into as long as I cuddle him. He is a very nice companion to have by your side, he always comforts us and even tries to make us feel better when we are ill. He is very much a part of the family.

Thats so sweet that he even keeps you company in the studio too, you have been busy there music wise? I know that 2020 saw Cadaver release your new album Edder & Bile through Nuclear Blast. The film clip for Reborn off that album is awesome! Where was that filmed?

Yes, the film clip for Reborn, was actually filmed in the fields around here, at my cabin, you use what you have you know?

Ofcourse, well I loved it. Cadaver’s drummer Dirk, lives in the United States, have you guys still been able to work together despite the distance?

Yes, he has a house in North Hollywood with an electronic drum kit and a studio setup so he can work with his
students as well as his session work. We’re actually working on demos for our new album already so that’s keeping me very busy. Right now, this week, I’m working on the new album for Order, which is coming together really well. I’m keeping the projects going one after the other. 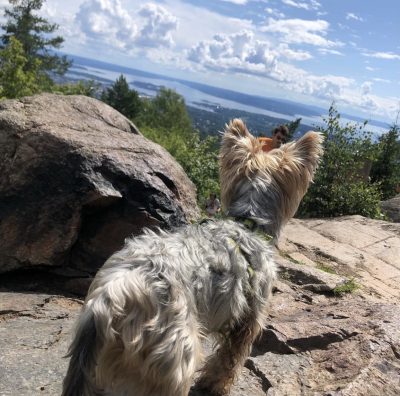 I’m also fixing my archives, staying active and trying not to think about when we’re going to play live again. To be honest I don’t really worry about it, because there is nothing I can do to change anything. I really enjoy being in my studio, working on music, so why not just enjoy what I like to do. I know I’m very fortunate to have the space and recourses to be able to do that.

Anders, this is all sounding super positive and productive. Do you have any words of wisdom for your supporters at this time?

Hmmm words of wisdom. Yes, if anything, this is the time to really figure out what you’re good at and try to make that as good as possible. Improve on yourself, try to learn new things and try to not spend too much time thinking about things you cannot do anything about. Don’t spend too long thinking about politics or about all of the stupid people in the world. The less I think about them, the better it is for me. The stupid people will always be there it’s just a matter of ignoring them.

Get a rescue dog and get a quiet place in the country side where nobody bothers you, if possible. It’s something that most people don’t have, so I’m really happy here. If all of the stuff I had in the world was with me and I was sitting in a tiny apartment somewhere on the outskirts of London and I didn’t know what to do with my life?

I would probably experiment with psychedelics. (Anders laughs) 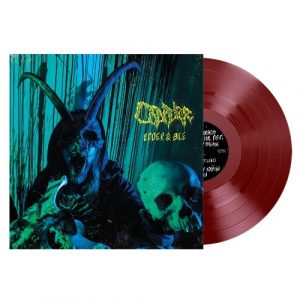 If you cannot have space and outdoors, make space inside! I recommend that!

Cats in Space: “Full Stream Ahead Into Atlantis!”