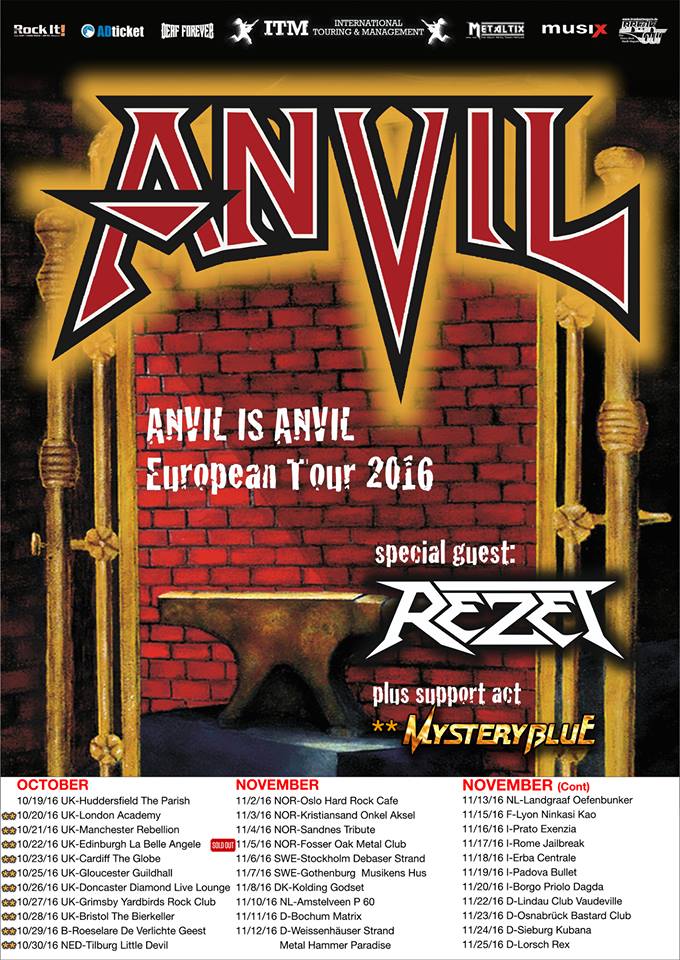 We got ourselves down to our new haunt The Rebellion Bar in Manchester to catch up with Canadian Metal band Anvil before their show.

We get there to a warm welcome from their roadies who have come over with them, their first time in the UK these guys are really down to earth and lovely guys, they tell us how much they are enjoying their time in the UK.

They take us into the venue and backstage to the VIP area where the guys from Anvil are hanging out.

Robb Reiner greets us first with a manly hug, we talk a little about his son Tylers wedding, Sacha Gervasi’s birthday and some movie related things they had come over to sort out, they can’t tell us directly but from hints dropped we could be looking at a sequel to the Anvil movie.

Lips tells us about meeting Phil X in London and being invited to the Bon Jovi gig, knowing what a huge Bon Jovi fan i am, i was completely envious of this opportunity only due to the fact Bon Jovi had increased their ticket prices significantly unabling me to attend the London gig.

Lips unfortunately is poorly tonight with a severe throat problem you can hear it in his voice that he can hardly speak, we hope he is able to pull through the whole set tonight.

Lips tries some vocal exercises from the boys in I.C.O.N who have turned up to see them play here tonight, front-man Mark Sagar from I.C.O.N gives lips some vocal exercises to help his throat out, and Scott Knowles Guitarist from I.C.O.N being the jester of the group encourages Lips to sing ‘doe a deer a female deer, ray of drop of golden sun’, trust me had i brought out my video camera to catch this in action backstage i would have done,this was pure comedy gold at its finest.

Chris is hiding somewhere on the tour bus but we catch up with him later after their set.

Lips talks to us a little about Roger Waters and how he has a gig abroad to which some of his friends are attending, then he show us his sparkly red Oktober V guitar, to which is his proudest instrument to date.

We catch the guys a little later on, but for now we head off to the stage to catch the first band. 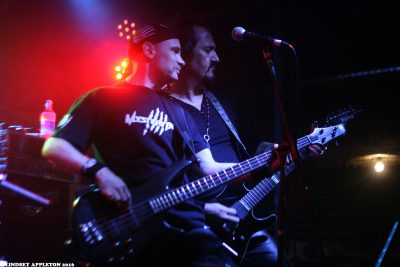 These guys deliver a fresh taste here on stage, blasting some almighty guitar riffs with crunchy bass grooves and beautifully crafted rich harmonies adding textures, tone and emotion and letting it flourish throughout which transforms into a powerhouse of vocals.

They have a solid attitude and release mayhem here on stage tonight, with catchy melodies they expand their musical boundaries producing a high caliber set.

Next up are Rezet who are a 4 piece Speed/Thrash band from Schleswig Germany. 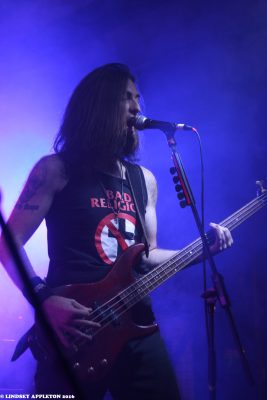 With aggressive guitar work, thunderous drums and heavy bass, Rezet set the marker here tonight for heaviest and loudest band of the night.

This new generation of Thrash metal band has extreme vocals which match the high paced balls-out velocity on guitar.

Producing material both old and new a keen favourite which entices the crowds is ‘Have Gun, Will Travel’ which produces boatload of wild riffing and catchy and memorable lyrics.

Band of the night, the band we have been waiting for all evening, they are finally here hitting the stage – ANVIL!!. 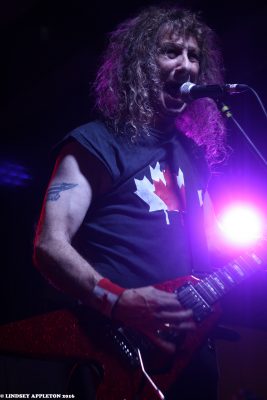 With their Anvil army in full swing and the venue sold out the energy here tonight is electric.

With Robb behind the drums, Lips on his red glittery V guitar and Christ on bass, we were totally stoked to see these guys back here in the UK again and boy oh boy they did not disappoint.

They start their set with ‘March of the Crabs’ with explosive riffs and crunchy bass the boys get straight into, no f**king about, just balls to the wall good old hearty heavy metal at its finest.

The band throw in tasty little treats like ‘Daggers and Rum’ which instantly makes you think of pirates and being at sea with a bunch of swashbuckling bandits, the riffs in here are freaking brilliant.

When Lips starts singing verses that instantly get stuck in your head you cant help but head bang along especially when its songs like ‘Mothra’ and all time classic ‘Metal on Metal’.

People are throwing the metal horns in the sir, saluting this band giving them the recognition they so rightly deserve.

The band have worked epically hard for where they are today on the music scene to reach the status to where they are at, and the crowds here tonight show that they have an awe-inspiring following here in the UK.

The band finish the night on ‘Born To be Wild’ first performed by the band Steppenwolf, well what a way to end the night here at Rebellion, getting everyone in full swing singing along to this brilliant all time favourite.

Considering Lips had been suffering with his throat and hardly being able to speak when we spoke to him at the beginning of the night, he did tremendously well to push through the set here tonight, hats off to him.

Anvil, you came, you saw, you conquered, you smashed it!.