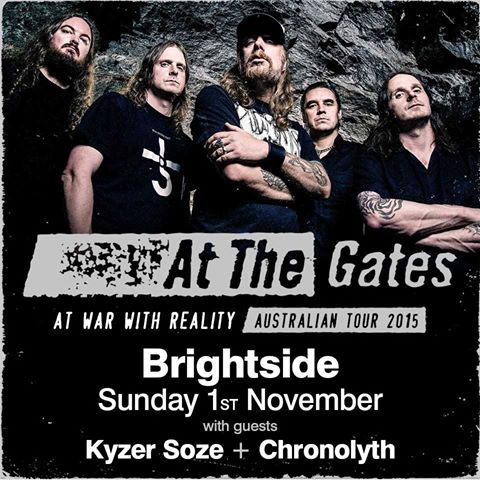 The air in The Brightside was ripe with the scent of beer, sweat and anticipation – would anything else have be acceptable for such a night of stellar death metal? A reasonably sized crowd have made it out for the Sunday night gig, though this is not the sell-out crowd Swedish melodeath pioneers At The Gates deserve. Touring to support their newest album, At War With Reality, At The Gates have chosen to have local bands support each date, instead of taking a few bands out on tour with them – and certainly for the Brisbane date, a better line up could not have been put together.

Local melodic death metal titans Chronolyth [8] open the night’s proceedings, and deliver a punishingly strong set mainly filled with tracks from debut album Sovereign – the band unleash a wall of ten tonne heavy, groove filled songs. Despite many attempts to get the pit going, the violence doesn’t properly kick off until frontman Hamish McSorley decides to dive from the stage and get things moving. Chronolyth give us an excellent performance of new single Revenants (which will be on their upcoming sophomore album) and have well and truly warmed up the crowd.

Next to take the stage is Kyzer Soze [8], a straight up death metal band again hailing from Brisbane. Imagine Nile and Cannibal Corpse had a little Satanic lovechild, and you’ll have a rough idea of what Kyzer Soze sound like. Dripping with brutality, they deliver an excellent performance showcasing some truly exceptional song-writing – brutality is undoubtedly key for the band, but the brutality is wrapped up in a well-executed, melodic at points and groovy shell. Frontman Alex Cabrera quickly develops a relationship with the crowd, and Kyzer Soze completely level the venue when the play Decedents of Cain, the lead single from debut album Ascension.

But finally, the time has come, and At The Gates [8] walk onto the stage, opening with the incredible Death and the Labyrinth the crowd are immediately sent into a frenzy. Keeping up the momentum, Slaughter of the Soul is next to grace our ears – few bands can play such an important track to their back catalogue (and let’s be fair, melodic death metal as a whole) better than it sounds on the album, but somehow At The Gates pulled it off. The set is filled with classics from their first albums, and the genre defining Slaughter of the Soul (including Under A Serpent Sun, which was just incredible to hear live), and a few of the better tracks from the comeback record we’d all been praying for At War With Reality. What really sealed the deal for me though was the incredible energy every member of At The Gates had, and how much fun they were having – and, as anyone who has ever been to a metal gig will testify to, when a band is having fun you can bet your arse the crowd will be too.

Devil You Know – They Bleed Red