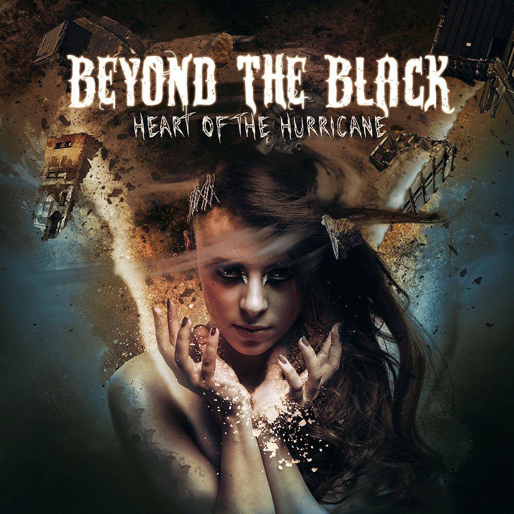 Hailing from Mannheim, Germany, Beyond the Black are making waves in the UK Symphonic and Gothic Metal scene; not as well-known as the giants of the genres such as Within Temptation, Delain and Lacuna Coil, their appearance at Bloodstock 2016 on the Sophie Lancaster Stage, Beyond the Black put themselves on the UK map. Spinning in with their third album, Heart of the Hurricane, Beyond the Black have been very busy in the small time they have been formed. As a band, it has been a rocky start, in 2016, months after the release of their sophomore album Lost in Forever, the band parted ways with lead singer Jennifer Haben; this meant a complete overhaul for the band as Jennifer continued on with the name and a new band behind her. The result is a third album and ever more presence in Europe. Signed to the giant metal label Napalm Records, things are definitely on the ascendency; so let’s see what turbulence this album has to offer.

The storm begins with a whirring of guitar riffs and symphonic samples as ‘Hysteria’ hits out ears. Jennifer Haben’s vocal prowess rings out; her incredible vocal power and range will always be compared to some of the big stars of the genre and its something that she can’t escape, that said, Jennifer definitely can keep up with he big power houses. Though Jennifer’s voice has impressive range, her ability to change it up so easily, going from the harmony to sultry so freely, gives her an edge over some of the other female vocalists out there. This continues with lovely harmonies and haunting notes in ‘Heart of the Hurricane’; the riffs are catchy, with anthemic undertones. It doesn’t quite hit that anthemic vibe that tends to be a theme of symphonic metal tracks, it’s as if it’s not quite hitting that sweet spot and yet you can’t help but sing along to the infectious chorus. the opening ivory fingers of the piano of ‘Through the Mirror’ definitely reminds you of their previous sound of Lost in Forever, the overtones of the symphonic samples really give it an incredible depth and the ballad style just feels so natural to the band. 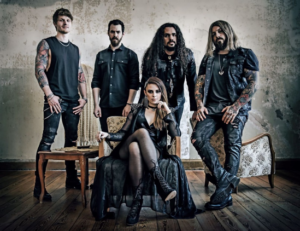 This anthemic ballad style continues throughout and with Chris Hermsdorfer’s surprise vocal twin lead in ‘Million Lightyears’ comes through, it really makes the single stand out and be counted. It has all the hallmarks of a classic track and well deserved as a single for the album (along with the title track of course); the heavy presence of the keyboard and bass lines blended brilliantly with the captivating riffs but it was Chris’s vocals that really made the track shine through. It’s not the only song to shine out of the fifteen tracks on show; ‘Song of the Godless’ gives us ever more haunting melodies of Jennifer’s stunning voice, however the addition of the Celtic fiddle and bagpipe samples ramps up its quality mixed with some excellent chorus lines. There are definitely hints of Within Temptation’s‘ Mother Earth’ surrounding the style, brought into the Beyond the Black sound.

The operatic overtures of ‘Beneath a Blackened Sky’ reaps its reward as this dark and haunting song gives us ever more powerhouse vocals, the hooks and overtures continue to remind you of Within Temptation whereas the heavier and more lyrical base of ‘Fairytale of Doom’ gives off a Delain vibe. The blatant copy paste opening of ‘My God is Dead’ copies the melancholic ‘My Immortal’ by Evanescence, yet the addition of the heavy male growls during the chorus is yet another pull, this time from the Italian Gothfathers Lacuna Coil. This was somewhat disappointing as the previous songs were more classic to who Beyond the Black are, and not a case of taking sound and style from others. The album starts to wain after this, with the catchy yet forgettable ‘Dear Death’ again takes on the sound of Delain’sWe Are the Others era. The catchy hooks still show themselves throughout and though the second half of the album doesn’t quite live up to the first half it shouldn’t take away from the overall experience as ‘Scream for Me’ and the heavy as hell ‘Freedom’ still give us some bite with the male growls kicking in with more grunt. The final track of the basic album ends with the haunting ‘Breeze’ where the opening shows off Jennifer’s vocals, naked and vulnerable with just a piano for company. Bonus tracks ‘Echo from the Past’ and ‘Parade’ really feel like bonus tracks as they just fill up slots for the deluxe edition, they still have their place and for die-hard fans.

Overall, this is a stunning set of tracks that show off the talents of Beyond the Black, yes there are areas that don’t quite hit the pinnacle of their creativity but that doesn’t mark the album too greatly. The songs have all the melodies and hooks you would expect from a Symphonic Metal outfit, with catchy riffs, infectious chorus lines and lyrics you can sing along to with ease. It’s an album that can be played time and time again and will be on repeat for some time to come. 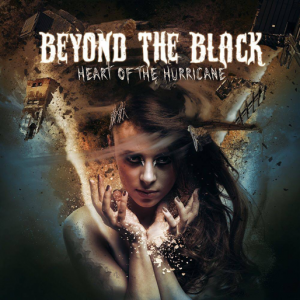 Check out Beyond the Black on HERE. You can order you copy of Heart of the Hurricane HERE.