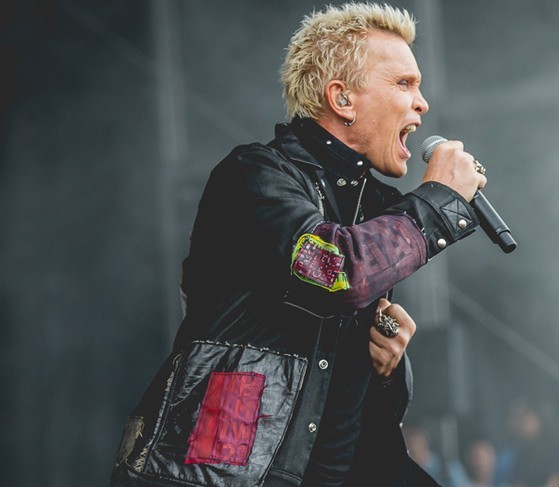 12th May 2022 0 By John Deaux
The world’s favourite rebel Billy Idol has rescheduled The Roadside Tour 2022 with new dates now set for October 2022. All existing tickets are still valid for the revised dates.
Says Billy Idol: “As many of you know, this year has dealt me some health challenges which are nearly, but not quite resolved. While my recovery is almost complete, I have been given doctor’s orders to stay off the road until August – and so it is with great frustration that we must reschedule the UK Tour for October of this year. Thank you for everyone’s understanding and support. These shows will be worth the wait!”
Billy will come to the UK with new music and a stack of timeless classics. For his first appearances in the UK since 2018, Billy will play 6 Arena shows with the rescheduled dates listed below.
Supporting Billy Idol, and replacing The Go-Go’s on the original dates, are very special guests Television including original frontman Tom Verlaine.
Says Billy Idol: “Sadly, The Go-Go’s are no longer able to join us. I am thrilled to share that now opening all UK shows will be Television, one of my favourite bands from the original New York punk scene and an inspiration to me throughout my career. I will be honoured to share the stage with them and hope everyone will come early to enjoy their set!”
The global lockdown of 2020 gave Billy time to reflect and thoughts turned to his near-fatal motorcycle accident of 1990, how he dealt with it and how it related to the current crisis. “It seemed quite logical and natural to write something about my motorcycle accident,” he says. “I may have been saying, well, this is what people go through when they are in trouble. I think I was unconsciously making that connection.
“Certainly, the motorcycle accident was the catharsis, the wake-up moment. A little bit of me got left by the side of that road. Maybe I left behind the irreverent, youthful Billy and opened the door for a more attentive father and more sensitive musician. Something did get left by the roadside, but it was not necessarily a bad thing in the end.”
Billy’s reflections are captured in the lyrics of Bitter Taste, one of four tracks on his 2021 EP The Roadside, which was his first new music for seven years and as hard-hitting and relevant as ever.
Billy’s touring band features his long-time guitarist and collaborator Steve Stevens along with Stephen McGrath (bass, backing vocals), Billy Morrison (guitar, backing vocals), Paul Trudeau (keyboards, backing vocals) and drummer Erik Eldenius. 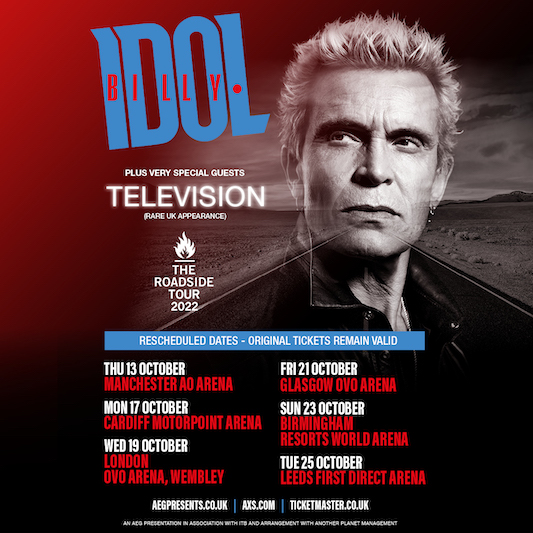 Billy Idol The Roadside Tour 2022 dates:
Thursday 13 October Manchester AO Arena
Monday 17 October Cardiff Motorpoint Arena
Wednesday 19 October London OVO Arena, Wembley
Friday 21 October Glasgow OVO Hydro
Sunday 23 October Birmingham Resorts World Arena
Tuesday 25 October Leeds First Direct Arena
Tickets for The Roadside Tour 2022 can be purchased
from www.aegpresents.co.uk/billy-idol
About Billy Idol
For forty-five years, Billy Idol has been one of the faces and voices of rock’n’roll, with an artistic resume to match the brilliant light of the image. First as the camera-ready front man for Generation X, between 1977 and 1981 Idol emerged with three albums that made positivity, emotional depth, and high pop synonymous with punk rock. In 1982, Idol embarked on a remarkable transatlantic/trans-genre solo career that integrated clubland throb, wide-screen depth and drama, rockabilly desperation, the bold and simple lines of punk, and rock’n’roll decadence.
Embracing the new MTV music channel, videos for White Wedding, Rebel Yell and Eyes Without A Face established Idol as one of the iconic performers of his generation, a position he still holds today.
About Television
Formed in New York’s East Village in 1973, Television’s influence was felt worldwide with a particularly major effect on British post-punk rock as well as American indie rock.
Television’s debut album Marquee Moon, released in February 1977, was hailed by critics as one of the most striking and original recording debuts in years. The scissory, cascading guitar lines, the jabbing vocals, and the ‘psychotic calypso’ drumming demonstrated that there was nothing punky or muddled about Television — it had the silvery clarity of a poised knife.
Marquee Moon was ranked #128 on Rolling Stone’s list of the 500 greatest albums of all time. It was also ranked #2 on Uncut magazine’s 100 Greatest Debut Records, and #3 on Pitchfork Media’s list of the best albums of the 1970s.

BEERMAGEDDON 2022 CELEBRATING A DECADE OF DECADENCE