You’ve got to give to both Crobot and support, Wolf Jaw. They pitched up at Rebellion in Manchester on what will be remembered as one of the hottest nights days of the year. Although the venue wasn’t packed to capacity it was hot and the smell of sweat and beer was tangible. “So to the bar young man” I told myself to buy a beer. Just enough time for the nectar of the Gods to hit the tumtum and Wolf Jaw hit the stage.

I strolled through the crowd and grabbed a spot right in front of the bass cab and to my absolute delight I got near on an hour of thunderous 70s infused hard rock right in my lughole. “We are Wolf Jaw from the Midlands, but don’t hold that against us” states singer and guitarist Tom Leighton.

Leighton is a gifted guitarist and this is evident as he leads fellow band-mates through songs from their previous and forthcoming albums. Drums are solid from the flamboyant Karl Selickis and bass is simply wondrous from Dale Tonks, often matching Leighton’s swift licks and jagged riffing. Wolf Jaw are a band I hadn’t previously heard of but am certain I will be watching again in the near future; highlights for me were I Lose My Mind and Beast (replete with Black Sabbath intro).

Crobot clearly have a number of loyal fans in Manchester. At a guess 80% of the crowd were wearing band merch and they lapped up every single moment of the performance. The band readied their gear and a nod from founder member and true guitar wizard, Chris Bishop set things in motion. Seconds later front-man Brandon Yeagley literally cool swaggered onto the stage for opening number Legend of the Spaceborn Killer. 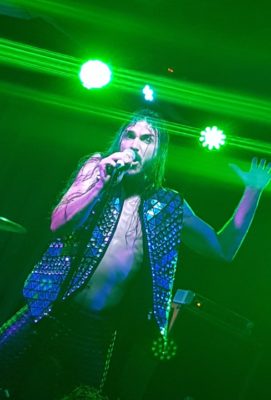 Dressed in studded black PVC pants and a bejeweled waistcoat, with a repertoire of dance moves drawn from any number of influences Yeagley is a bonafide stadium rock front-man. Tonight however I was satisfied with Rebellion so I could get right up close. Skull of Geronimo demonstrates Yeagely’s extraordinary vocal talent whilst the rest of the band attack the music like their lives depend on it. What struck me is the image of Bishop and Eddie Collins (bass), both with shaven heads and thick beards thrashing about in true ‘metalcore’ stagefuckery (especially seen during Plague of the Mammoth) whilst Yeagley is all 70s pomp; like a weird cross between Mick Jagger and Jack Black; I guess this is what they call a juxtaposition, right?

This is a band that shine in intimate surroundings whist making your chest shudder, and your body want to move, and move, and move. God bless ‘em. When things eventually slow down for a brief time to accommodate Queen of the Light, Yeagley and Co. continue to impress with note perfect delivery. The Necromancer shakes things back up again before the night draws to a close with Nowhere to Hide; then the stage is empty. No encore. No need. Rebellion has been rocked to the bone. 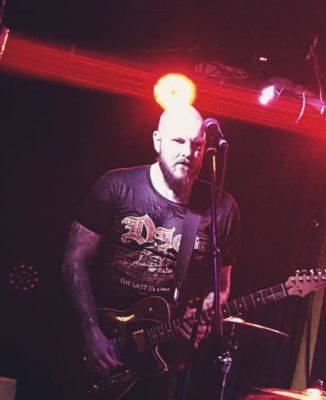 Crobot are currently promoting their forthcoming fourth album, Motherbrain which is a very good album. They however need to be seen in the flesh for the power of their darkened hard funk to be fully appreciated. This was a polished performance from a band who sadly may never transcend the venues they are currently shaking down in the UK. But I don’t think this will ever stop them doing what they do; they are simply having too much of a good time. 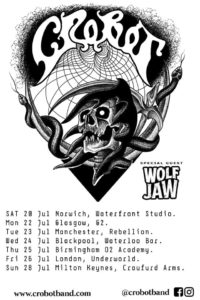