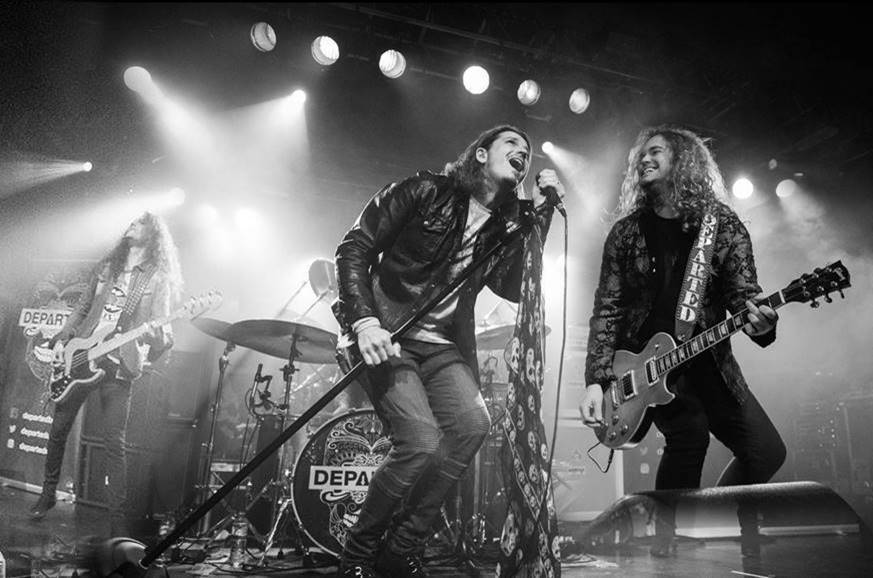 Dynamic 4-piece, Devon-based DEPARTED are proud to release an exhilarating single ‘Come On’  from their recently released EP ‘Tides’, along with the accompanying video of their live performances on tour and at festivals including Download and Steelhouse Live.

“’Come On’ is a great feel-good rock ‘n’ roll tune that will instantly get you singing along and your foot tapping” say the band gleefully, “It’s intended to be turned up!”

Frontman Mark Pascall and guitarist Ben Brookland and  give ‘Come On’ plenty of crowd-pleasing stride, swagger and wide-stance rock and roll presence and pizzazz, as can be seen live on stage in the video.

It’s fitting that the video for ‘Come On’ shows DEPARTED playing many live festivals, rousing the crowds. The band’s been highly active on the festival circuit, over the past couple of years having appeared at major festivals including: Download Festival; Bloodstock Open Air; SteelHouse Festival; Looe Music Festival; Hard Rock Hell and many more! The band’s love of live gigs and festivals (and their presence playing them!) comes fully alive in ‘Come On’s’ video, where you see many a crowd happily rocking out to DEPARTED!

DEPARTED have also travelled far and wide, supporting world-class bands of the calibre of Status Quo, Big Country, Phil Campbell and the Bastard Sons, Chuck Mosley (Faith No More), the Graham Bonnet Band, and Skindred. What’s more, in 2017, DEPARTED were proud to support the Michael Schenker Fest on tour and were the major support for THE NEW ROSES’ late-2018 UK tour.

So ‘Come On’ and check out this great sing along track, and the EP, as well as the band’s latest live appearances.