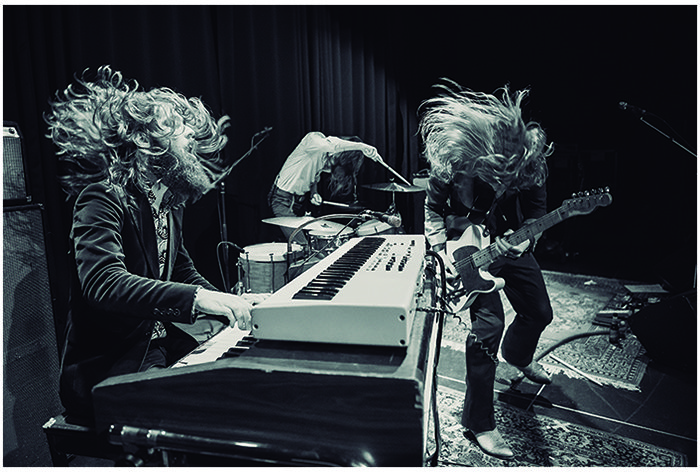 Funk soul brothers from the Netherlands, DeWolff go Lo-Fi for their latest release; The Tascam Tapes.

Testament to the fact that great songwriting cuts out the need for hi-tech, over-polished production, DeWolff decided to record their latest long player on a 1980s Tascam cassette recorder whilst on the road. Using mainly samplers and synths to support guitars and vocals the band stripped back their delicious groove laden, guitar/hammond/drums signature sound for something much more primitive, whilst losing none of their signature boogie.
The Tascam Tapes lets loose twelve beautifully crafted and richly inspired tunes to get the foot stomping and the hips shaking. Album opener Northpole Blues has a deeply southern feel with the beatbox holding it right down while the boys harmonize vocals and play shamelessly with the synths. Single Blood Meridian (inspired by the book of the same name by Cormac McCarthy) follows with a darkly possessive groove with slick guitars.
With Blood Meridian the band have managed to capture an atmosphere entirely pertinent to the tale that inspired the track; easily one of the best tracks I’ve heard in ages. It Ain’t Easy is a loose funk driven tune, again capturing the decade that set the standard for the genre and maintaining the band’s classic swagger. Followed quickly by Rain which is magically reminiscent of the 70s soul classics.
The Tascam Tapes already demonstrates a band with such creative freedom and verve, that it’s easy to see why they were comfortable in the experimentation of this release.
Made it to 27 again shows the band’s ability to tip their caps to bands that help create their sound; this track could easily be from an early Steely Dan album such are the vocal passages and guitar noodling. Nothing’s Changing and Let it Fly are playful synth driven tracks with solid groove and layered vocals deeply rooted in the blues.
Blood Meridian II returns to the theme of the previous tune this time with dark low synth providing the riff, over-layed with more prominent percussive elements; simple and never drifting from the album’s aesthetic.
Awesomeness of Love interludes and segues into Love is Such a Waste, a slow and elegant psychedelic soul delivery with a distinct Curtis Mayfield melancholia. Am I Losing My Mind treads the same path before drifting into the more upbeat Life in a Fish Tank. Here the band return to the funk/soul-disco heard in earlier tracks and is totally the right tune to bring The Tascam Tapes to a close.
DeWollf took a leap of faith in this recording and they purport that it cost less than 50$. You wouldn’t know this however as other bands likely spend thousands to achieve the same result but arguably do not render the same authenticity as The Tascam Tapes.
The album artwork maintains the ‘less is more’ imagery consistent with this release but the band’s stage presence and artistry are anything but minimal. This is a bold move for sure but a beautiful achievement in it’s simplicity.
Score 8/10 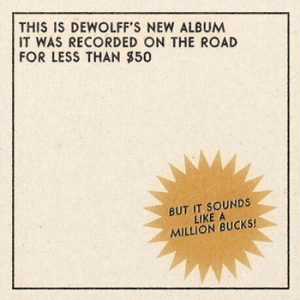