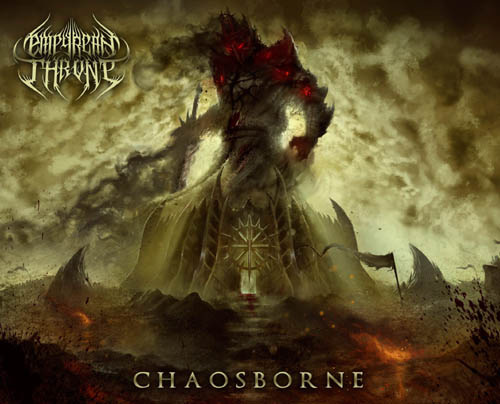 Empyrean Throne hail from that hot bed of black metal bands…the good ol’ US of A (that’s sarcasm for the simpletons!).

Must be hard to be all gloomy, brooding and angry when the sun is bearing down on you, also you look a little silly in corpse paint in hot weather! Let’s be honest a lot of USA pure black metal bands are awful, now before you want me lynched some USA bands that have a black metal element to their sound are good/great.

For example ABSU, December Wolves, Goatwhore, Skeltonwitch, Acheron…however how many great black metal bands hail from the USA? Well could that all about change with the release of ‘Chaosborne‘?


With trepidation I press play and await the forthcoming onslaught to the senses…Well after a few spins am quite surprised, although this release is nothing new or ground breaking it is a fairly enjoyable album. Empyrean Throne play in the style of early Dimmu Borgir (Enthrone Darkness Triumphant era), Cradle of Filth (Dusk…and Her Embrace), Old Mans Child etc, if you enjoy highly polished symphonic black metal then you might find something you like on this album However if you prefer your black metal raw, harsh and brutal then you might want to stay clear.

My only problem with this release is the production, the drums and vocals are so high in the mix that the rest of the music can get lost when they are both combined. Especially the guitars (lead and bass) and am not sure if this has any!!! On one or two tracks you hear a riff and that’s about it, I’ve checked the internet and supposedly they have a guitarist!!! Anyway for a self released album this is half bad (suppose you could say it isn’t half good either!)

If you are new to Black metal then you might find something enjoyable about this album or if you are a diehard symphonic black metal fan. If you are a black metal stalwart then this release could go either way. There are a lot of better bands than Empyrean Throne out there, but there is also a lot worse… Empyrean Throne could be a USA black metal band to look out for in the future if they hone their sound and skills and sort out the production. The songs structures and the flow of the album is quite impressive, they are just lacking that edge.