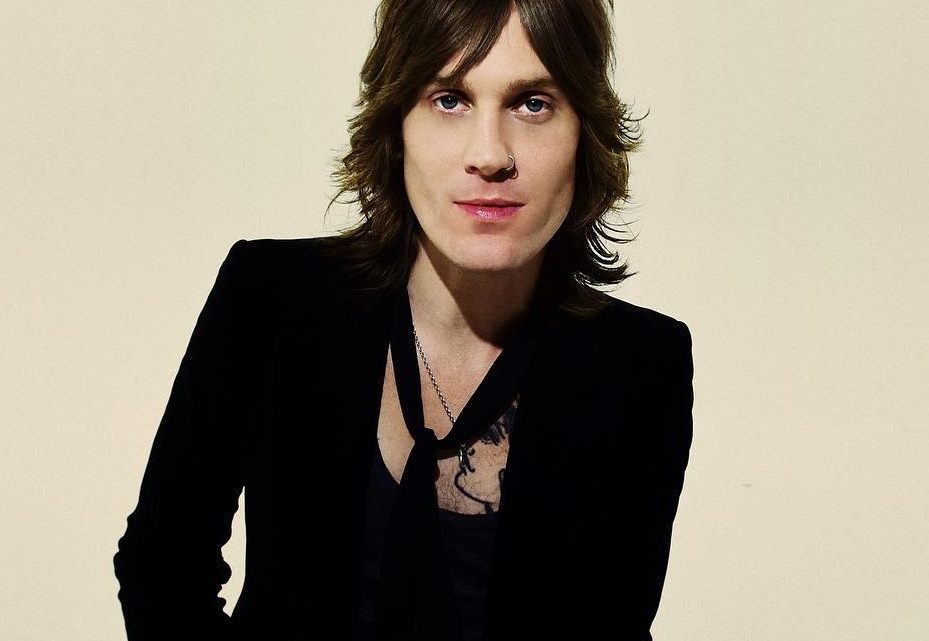 Rock ‘n’ Rollers Tuk Smith and the Restless Hearts have just dropped their E.P What Kinda Love. We caught up with Tuk to have a chat about his dogs.

I went to the Renaissance fair one time and there was a demonstration of these border collies rounding up  sheep. It was Amazing to watch. Over in the corner was a cage with these baby border collie puppies…They were the cutest things I’ve ever seen in my life… One of the owners came up and said the puppies for sale because they travel all around the country with the Renaissance fair and it’s just too much to take care of them. I met the  puppies parents and they were awesome, I decided I had to have one. 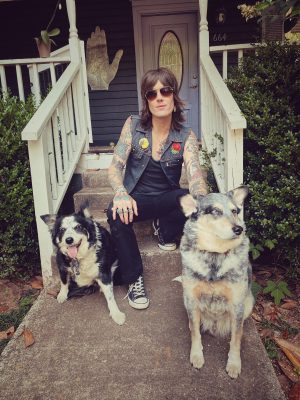 After much deliberation I decided “Gypsy” was the best name for the dog because she was born traveling around town to town doing shows and it just really fit her personality.

She’s a thoroughbred  border collie and bred for work not show, so she’s scrappy and has a coyote’ish quality. Not to mention Gypsy Rose Lee was a famous burlesque entertainer. The name just felt right.

Rambo Love was a rescue puppy from the Humane Society… When I got him he was the meanest motherfucker you could ever imagine.

He would bite the shit out of you… A shortly found out he had already been adopted and returned once before because of his behavioral issues. So I decided to name him Rambo.. After a few months with constant padding and kisses he decided he liked to be loved on and became a little snuggle pig …The last name “love”. Half mean boy half sweet boy snuggle pig.

Border Collie’s have so much energy when they’re young you half to wear their ass out with physical activity. I mean I would have to throw the ball for gypsy for 2 to 3 hours a day just so she wouldn’t tear the house up.

When I first got gypsy I was working construction and I will come home so fucking tired and plop down on the couch. Gypsy didn’t care and she wanted to go outside and have me throw the ball she kept dropping the ball on the couch and putting it in my hand and I was so tired I just laid there… Finally Gypsy got so fed up she crawled up on the couch and took a shit right on top of my head, I couldn’t believe it… I was furious but also laughing so hard …No matter how tired was I made sure I made time for her after that .

What is the best trick the collies have?

Both pups are pretty smart and can do lots of tricks…  if you call Gypsy’s name and pat your chest she’ll do a running start and jump up in your arms from three or 4 foot. Also walk on her hind legs for a treat for a long time it is hilarious. She could’ve definitely been one of those dogs who participated in the agility tournaments.

This past year has been pretty manic, so you’ve no-doubt, like the rest of us, spent a lot of time at home. How has Gypsy Rose and Rambo Love helped being at home for you? Have they been comforting, or have they just been driving you nuts?

It’s been absolutely awesome to hang out with my pets more. No complaints about that.

Growing up I was never allowed to have pets so naturally I couldn’t wait to get dogs of my own. I’ve Never owned any exotic or different pets.

Are you one of those people that puts your dogs into costumes?

Their uniforms are usually red and blue bandannas so they look like bandits. No battle vests yet!

I actually wrote a song about my dog called “Gypsy Rose” in my previous band and it was a fan favorite and one of my favorite songs I’ve ever written. I was sitting in the living room with an acoustic guitar trying to write a song as always and I just started singing her name as a joke over chords .. I was just joking but I was like damn that is good I have something here.

Who looks after your dogs whilst you’re away on tour/holiday?

My dogs are so smart they just take care of themselves… They usually take care of me when I’m at home. Rambo is a great cook.

Patiently waiting for this pandemic to be over !!

Have you got anything you’d like to say to your fans/followers?

Hang in there!!! Things will get better ! And support your favorite artists as much as you can during this time! It means the world to them, I promise!

Thanks Tuk for your time.

For all things Tuk  Smith & The Restless Hearts, click HERE and to purchase music and merch, click HERE