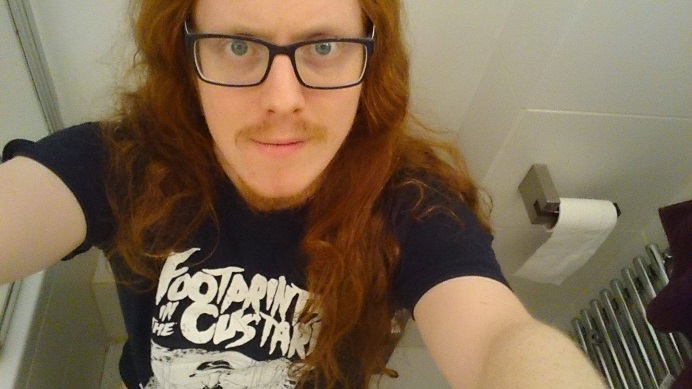 We managed to grab the party animal that is Russ Custard from Footprints In The Custard during Lockdown 3.0.

Is it just the one pet you have? 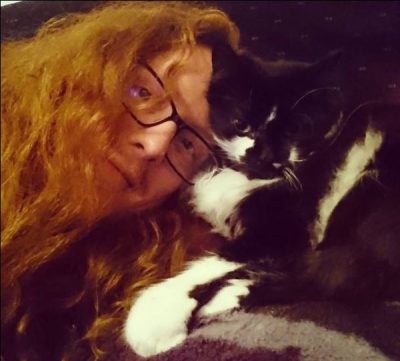 Just the one, a pet cat called Fisherman (Fish for short). He’s a little bastard. I’m not sure why he’s called Fisherman, he’s a rescue cat and I just kept the name he already had. He’s been living with me for four long years. It’s hard to describe Fish without using the word arsehole. We have a great amount of mutual feeling for each other…

He once ate through a pizza box and scooped out my freshly ordered pizza when I wasn’t looking. He also bit into a French stick and scooped out the insides of that. He also once ate a load of homemade spicy chilli. In fact, the majority of his crimes to mankind involve him stealing food that isn’t his. And yes, I do feed him well, he’s just a fat git!

What is the best trick Fish can do?

Pretend he’s not been fed when he absolutely bloody has.

This past year has been pretty shit, so you’ve no-doubt, like the rest of us, spent a lot of time at home. Has Fish helped being at home for you or has he  just been driving you nuts?

To be fair to the guy he sleeps most of the time. And he poos in my next-door neighbour’s garden, so he’s not loads of maintenance providing he’s not stealing food or bringing giant bloody squirrel’s home.

I was an animal lover until Fish, but yeah, we have a tortoise in the family, he’s called Ringo and he must be in his late 50s now!

Are you one of those people that dresses up your cat?

I would love nothing more than to dress him up because he’d absolutely hate it, but he’d cut me to ribbons and then hold a grudge. My life isn’t worth that torment.

Does Fish like it when you practise at home?

Unless it’s plastic bags or the vacuum cleaner he’s pretty nonplussed about absolutely everything in his weird little life. I reckon he hates all music, and everything for that matter.

Who looks after Fisherman whilst you’re away on tour/holiday?
My fiancé when on tour or my next-door neighbours when we’re both away.

We’re in the early stages of new music – it’s been difficult for us during lockdown! We are however starting a regular stream of us playing Dungeons & Dragons, which we have affectionately called ‘Chaotic Stupid – Low Brow, High Fantasy’. It’s going to be an absolute blast I can tell – check out our Twitch and Youtube channels for that! Maybe Fish will get in on the action too… First (pre-recorded) episode is up on 17th Jan and the first live stream is scheduled for 24th Jan!

Thank you for your continued support whilst we’ve been unable to be out gigging – you’re all wonderful! Stay safe and look after those close to you, we’ll see you soon! <3

Cheers Russ. Hope to see you on a stage somewhere soon.