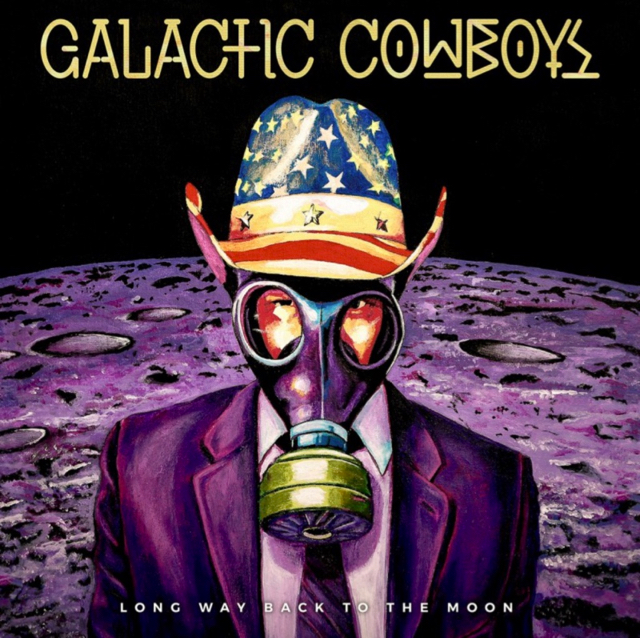 A notoriously difficult band to categorise, the Galactic Cowboys are first and foremost a metal band with thrashy undertones. Many liken the big vocal harmonies of the band to The Beatles, but I’m not sure what point anyone is trying to prove in comparing them with arguably THE most overrated band of all time. Why not call them harmonic melodic classic thrash-rock-core or something instead?

Perhaps one of my colleagues hit the nail on the head in describing the Galactic Cowboys as “experimental af”?

In any case Long Way Back to the Moon is perhaps not experimental af, but it’s certainly heavy af and from the off we’re treated to blisteringly heavy riffs underpinned by a solid rhythm section. In fact In the Clouds and Internal Masquerade have elements of early (when they were good) Machine Head to them which is never a bad comparison.

The harmonic vocals do sound a little out of place with such heavy music rather than the de rigueur shouting, yelling, screaming and grunting one usually associates with stuff towards this end of the musical spectrum. You will get used to it as the album progresses, but it still won’t sound right.

Zombies is quite a killer tune and it’s sure to get plenty of accidental hits on the music streaming platforms from fans of The Walking Dead and that reworked Jane Austen novel. This might have been the plan of the Galactic Cowboys or it could just be a coincidence.

And then you get Drama which sounds a little bit like Metallica having a bad day – there have been thousands of bad days for Metallica since about 1988, but hopefully you get what I mean.

Hate Me restores some of the faith with a heavy groove and then Losing Ourselves sees the band, well, lose themselves a little bit. The title track is fairly weak and all over the shop, even by the Galactic Cowboys’ usual all-over-the-shop-ness.

Say Goodbye to Utopia says goodbye to Long Way Back to the Moon and it’s a good song, hampered only slightly by vocals which in parts sound like Aerosmith, bizarrely.

Musically, the Galactic Cowboys are almost faultless, but even after multiple listens I can’t wrap my head around the wall of vocal harmony that accompanies every track and it simply doesn’t make for a good combination.

And I must address something that’s plagued me during listening to this album and writing this review. How long a way is it back to the moon? It’s 384,400 kilometres, according to Wikipedia. Now I will be able to sleep at night.

LONG WAY BACK TO THE MOON ALBUM INFO
Track listing:

Buy Long Way Back to the Moon here and get more information on the Galactic Cowboys here.