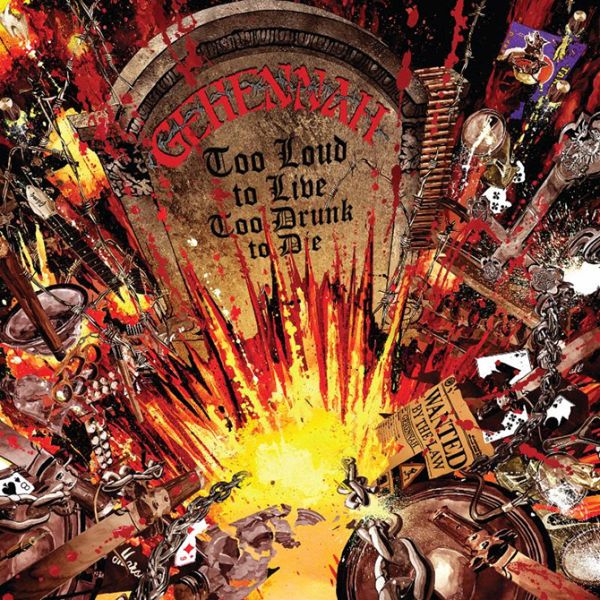 Before my work induced hiatus I was hit with the pleasant surprise that Gehennah had signed to Metal Blade and were re-releasing ‘Metal Police‘ before they got into the studio to record a new album! Their album prior to this new release, “Decibel Rebel“, was released in 1998 and I remember getting it on release (showing my age) and it was a great album and one that I still listen to frequently to today! So after ‘Metal Police‘ had wet my appetite I just couldn’t wait to hear the new album!

If you are looking for a band that spend hours agonising over lyrics, musical arrangements, riffs to capture the listener, for music to bring meaning or a purpose? Then Gehennah aren’t for you as do they bollocks…this ‘Street Metal‘ quartet give us sleazy, hard, blackened speed metal. Think of a bastardisation between Motörhead and Venom with some of the more punk tunes of Impaled Nazarene thrown into the mix for the hell of it…

Is this as good as “Decibel Rebel” or “King of the Sidewalk“, well that’s a hard question! That’s like asking when was the best time you got drunk? The production is still raw, primitive and gritty and that’s what makes this album pack such a punch! However just because Gehennah don’t go for the highly polished sound and prefer the primitive sound their playing is anything but! The drums offer a barrage of double kicks and frantic pounding, all while the bass rumbles along. Mr Violence sound like a more whiskey doused Lemmy belting out sleaze and drunkenness while the highlight are the riffs. Although some might argue they are basic, they blend rock, speed and thrash hooks that are all catchy as hell with leads that carry the songs!

“Too Loud to Live, Too Drunk To Die” is 37 minutes of drinking, fighting and gutter crude metal…get your battle vest on (over your leather jacket if you prefer), bullet belt on and drink that whiskey while banging your head. Don’t like the sound of that then Gehennah don’t care…they stick to what they like and screw everyone else! If you want to enjoy the ride then buckle up or piss off!

SONGS TO DOWNLOAD – “Still the Elite”, “Too Loud to Live, Too Drunk to Die”, “Gehennah Will Destroy Your Life”, “Low On Cash, High On Speed” & “All of the Decadence, None of the Success”