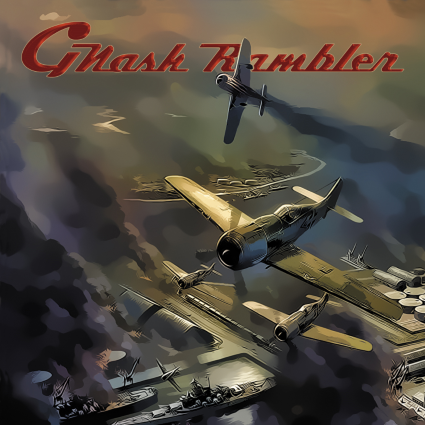 You can never go wrong with a slice of punk, but are there really any good, new bands around? Canada’s Gnash Rambler have thrown their hats into the ring with this self-titled debut and it looks promising.

In a world where not-at-all-dangerous pop punk gets regular airplay, it’s nice to see something a bit faster come along. And this is a bit different to most of the mainstream punk stuff you’ll hear on Radio 1. There are hints of metal here and there and it’s not sugar-sweet.

It’s also nice to see a band from Canada emerging on to the scene. North of the border with the US is an often-forgotten hotbed of musical talent.

Dues and Don’ts has an amazing guitar solo on it, which isn’t especially punk but it fits well. Very well.

Bad Karma has a riff that’s sort of a hybrid of a metal-as-fuck thing and one that The Offspring wrote.

But let’s not forget that there’s plenty of room within the vast confines of punk to be melodic too. Borrowing heavily from the Bad Religion template there are plenty of massive vocal harmonies all over the show.

Downtown Rock reminds of the Presidents of the United States of America (remember them, with Lump, Peaches, et al?) and that’s no bad comparison either.

The award for bizarrest song title goes to Buick Spyder Beyond Our Means, an instrumental song which actually kicks serious arse and then stops being an instrumental after three minutes. Confused? Yeah, me too.

Blues for Boogie is a bit of a let down, the song title perhaps indicating why. But that’s the beauty of punk – sometimes doing the least punk thing possible is the most punk thing you can do.

Jello Mold restores faith with a pogo-tastic belter of a song.

The best debut album from a punk band I’ve heard in many, many yearsTim Jones

Doin’ It All Wrong is ironic as it demonstrates exactly how to do it all right,

And then I’m Het follows as another quick lesson in how it should be done.

PAX Americana is brilliantly simple and simply brilliant. It illustrates perfectly how Gnash Rambler can effortlessly create something catchy without being overly poppy.

Man Over and Sex Beat close what I can only describe as the best debut album from a punk band I’ve heard in many, many years and great, uplifting and frantic style.

And who else from Canada is a bit of a punky metallic mix? Propagandhi. Gnash Rambler can be as big as them if they continue in this fashion.